The decision to award Qatar hosting rights for the 2022 World Cup has been marred by controversy, including allegations of corruption and human rights violations, since it was first announced 12 years ago. Here is a look at the issues:

FIFA awarded the tournament to the Middle Eastern country in 2010, with the understanding it would be held during the summer, where temperatures exceed 40 degrees Celsius (104 Fahrenheit).

In 2015, FIFA recommended that Qatar host a shorter World Cup over the cooler months of November and December in a move that was sure to put soccer’s world governing body on a collision course with the major European leagues.

The schedule change to the northern hemisphere winter marked the first time that the World Cup moved from its regular slot of June and July when Europe’s lucrative domestic leagues have concluded their seasons.

The leagues will pause their 2022-23 campaigns to allow players to compete in the Nov. 20-Dec 18 World Cup.

The organisers of the 2022 World Cup have strongly denied allegations from the U.S. Department of Justice that bribes were paid to secure votes when the hosting rights for the tournament were awarded 12 years ago.

Suspicion and rumours have long surrounded both the 2010 vote by FIFA’s executive to hand the 2018 World Cup to Russia and the 2022 tournament to Qatar and prosecutors set direct, formal allegations regarding both tournaments down in an indictment in 2020.

Qatar’s Supreme Committee for Delivery and Legacy — which is responsible for the delivery of the required infrastructure and host country’s planning and operations — has rejected the charges.

Qatar 2022 CEO Nasser Al Khater told reporters when the Middle Eastern country marked a year to go for the tournament that Qatar had been “unfairly treated and scrutinised” for a number of years. 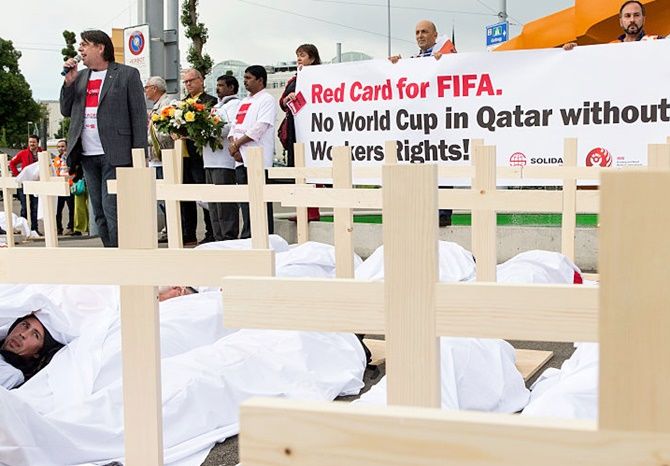 Qatar has faced intense criticism from human rights groups over its treatment of migrant workers, who with other foreigners comprise the bulk of the country’s population.

A 48-page report by Amnesty, Reality Check 2021, said that practices such as withholding salaries and charging workers to change jobs were still rife, despite labour reforms in 2014.

The government of Qatar said its labour system was still a work in progress but denied allegations in the report that thousands of migrant workers in the 2022 World Cup host nation were being trapped and exploited.

Amnesty and other rights groups have led calls for FIFA to compensate migrant workers in Qatar for human rights abuses by setting aside $440 million, matching the World Cup prize money.

The Football Associations of 10 European nations, including England and Germany, have pushed FIFA to take action to improve the rights of migrant workers in Qatar.

FIFA has written to World Cup teams urging them to focus on the football in Qatar and not let the sport be dragged into ideological or political battles. Homosexuality is illegal in the conservative Muslim country, and some soccer players have raised concerns for fans travelling for the event, especially lesbian, gay, bisexual and transgender (LGBT) individuals and women, who rights groups say Qatari laws discriminate against.

But World Cup organisers have repeatedly said that everyone, no matter their sexual orientation or background, are welcome during the tournament.

Less than two weeks before the finals, Khalid Salman, a Qatar World Cup ambassador and former international, told German broadcaster ZDF that homosexuality was “damage in the mind”.

He added that the country expects more than one million visitors for the World Cup and anyone coming to Qatar for the tournament should “accept our rules here”.

The Australian soccer team has spoken out against Qatar’s record on human rights and same-sex relationships, while Denmark’s players will travel to the tournament without their families as a protest against the country’s human rights record. The Qatar World Cup is the first to be held in a Muslim country with strict controls on alcohol, presenting challenges for the organisers of an event sponsored by a beer brand and often associated with beer-drinking fans.

The country will let ticketed fans buy beer at matches starting three hours before kickoff and for one hour after the final whistle, but not during the match.

They will also have areas for drunk fans to sober up, with tournament chief executive Nasser Al Khater saying the move was to make sure fans were safe and not harmful to others or themselves.

IPL Poll: RCB vs KXIP: Who will win?

Heavy shelling by Pak in areas along LoC, woman injured