Abdul Samad hit the second century of the Ranji season which took his team to an innings win. Abdul Samad, 18, is an unabashed Rohit Sharma fan. While growing up in Kalakote village in Jammu, the youngster was consumed by the passion to bat like India’s second-most-popular cricketer. From the fun tennis-ball mohalla matches involving friends and elder brother Taiyyab, to the more high-profile under-14 affairs, the youngster was steadfast in his obsession. He would devour all the India matches on television, and then shadow practice in front of his mirror at home, all in a bid to bat like his idol.

These days, however, Samad’s batting hardly displays flashes of Sharma. Instead, his batsmanship seems to be carved straight out of Prithvi Shaw’s manual. Outright belligerent and pummelling opposition bowlers into submission have been his modus operandi in his debut Ranji season. His team-mates are not complaining. It’s a method that has served him well thus far in this competition. Samad has featured in just four first-class matches, but he has already created an instant impression with his blitzkrieg.

He shellacked a 75-ball 128 against Jharkhand, paving the way for J&K’s thumping innings win — their third of the season — catapulting them behind Odisha and Haryana on the points table. Before his exploits against Jharkhand, he harassed Assam’s bowlers at home — his whirlwind unbeaten 72-ball 103 giving J&K a comprehensive first-innings lead. Had it not been for the intermittent rains in Jammu, their bowlers could well have seized the initiative and gone all out for a win.

Samad’s aggressive back-to-back centuries comes days after his big splash at the IPL auction — where he was snapped up by the Sunrisers Hyderabad for Rs 20 lakh — and saw him trending on Twitter. The teenager, on his part, takes all this in his stride but concedes the IPL auction splash has boosted his confidence, which was reflective in these two consecutive impactful knocks. “I don’t read too much into all this. The Sunrisers Hyderabad franchise saw potential in me, which is why they have selected me. But I will have to admit that it did play a part in the way I played in these last two matches. My confidence got a massive boost,” he tells The Indian Express.

Samad says that he has no qualms in batting at any position. He had opened for J&K in the shorter formats, and in his four first-class matches, the team management has used him in the middle-order, at No.5 and No.6 positions. He has responded to the challenge by striking two centuries and an equal number of fifties, taking his tally to 370 runs in his six innings. The consistency, notwithstanding, his ability to ransack humongous scores in such quick time serves two purposes.

First, it leaves oppositions with little recovery time. Second, his aggro means that J&K have managed to accrue scores in excess of 400 on a more consistent basis, which inturn gives ample time for their bowlers to take 20 wickets and go for outright wins. “I don’t really care at what position I bat in the order. The only concern is that my runs should help my team. In the Ranji Trophy, I have been batting down the order and my plan is to score quick runs. I back myself to play in an aggressive manner as I know that I have all the shots in my armory. Thankfully, the wickets have been good for batting, so that has also helped my cause,” Samad explains.

These are early days, but Samad credits his success to Irfan Pathan, the former India all-rounder, who as J&K’s mentor had spotted him two years ago during the trials at Jammu’s Science College Ground.

Even back then, the teenager had all the shots and the confidence to back his burgeoning talents. As the story goes, Pathan was instantly impressed and decided to draft him in the squad. “I first saw him two years ago during trials organised to spot upcoming talent. I was immediately impressed by his stroke-play and his ability to hit shots on the up. There were about 400 guys and he was one of the five whom I had picked,” Irfan Pathan says.

Pathan then went to the organisers of the state’s junior cricket and fished out Samad’s personal scores. He immediately jettisoned him in the senior squad for the List-A as well as T20s. His propensity to play the big shots earned him a place as an opener. He achieved fairly decent levels of success, striking four fifties — three in List A and one in the T20s. Ahead of this year’s Ranji season, Pathan asked him to bat down the order. 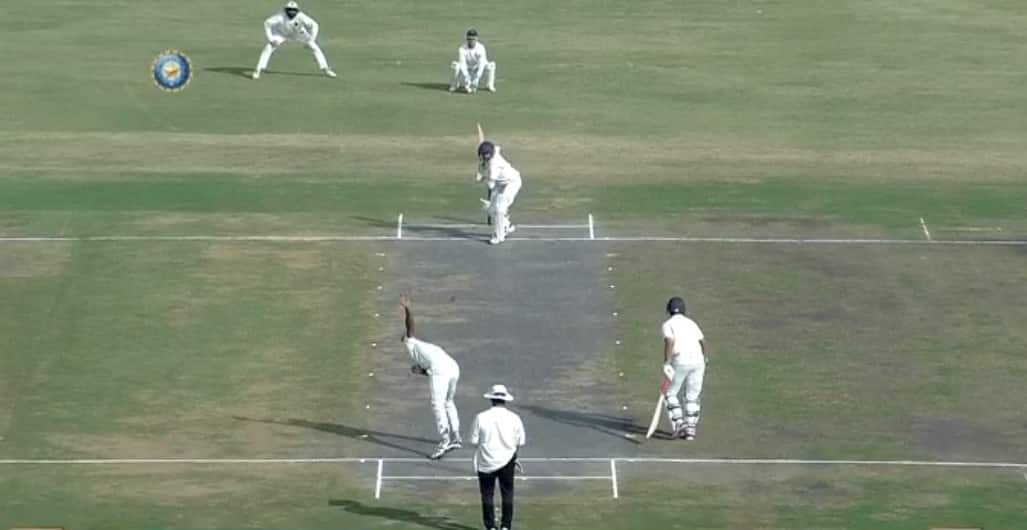 “From the first day that I saw him, I always believed that Samad was a match-winner for us. We asked him to open in the shorter formats as we thought that his aggressive intent would help us with rollicking starts upfront. For Ranji Trophy, we opted for a more conservative approach and decided to blood him after three or four wickets were down. In these four matches alone, he has shown his abilities by scoring 70-ball 100s.” Pathan explains. Going forward, he reckons Samad has the potential to score double centuries batting down the order. “Apart from his big hits, add a bit of leg-spin, googly and acrobatics on the field, and you are looking at a complete all-round package,” Pathan observes.

Of late, Samad has made it a habit of hogging the limelight. An IPL call-up followed by thunderous back-to-back centuries in first-class cricket. Pathan, though, believes he can go all the way. “Trust me, he is one of the two players from the current J&K squad with the ability to represent India…the other being Rasikh Salam.”

Another WWE Superstar asks for release from company

India tour of Sri Lanka an opportunity for Rahul Dravid to ‘learn’, a challenge for Shikhar Dhawan