Every minute of the 90-minute episode was filled with fun and revealations and showcased several moments from their brilliant cricketing careers, including that Lord’s moment when Ganguly took his shirt off to celebrate India’s victory over England in the 2002 NatWest series.

Bachchan assured Ganguly he had no reason to feel ashamed of that Kodak cricketing moment and told the then Indian captain that he could lip read what he was saying, shirtless on the London balcony!

Sehwag — who deserves a cricketing show all by himself, given his rapidfire quips — revealed that the Pakistani cricketers would have song requests when he was at the crease, given his famous penchant for singing songs to distract himself from what the bowlers were planning to hurl at him.

Kamran Akmal, then the Pakistani wicket-keeper, Viru said, would ask him to sing Kishore Kumar numbers!

It was against Pakistan that Sehwag hit the first triple Test hundred by an Indian batsman (he hit one more [319] against South Africa and would have scored a record third triple Test ton, but was out for 293 against Sri Lanka)

Bachchan quizzed Ganguly about his habit of making people wait, referring to then Australian captain Steve Waugh glowering at the toss in the Eden Gardens Test in the March 2001 Test series.

Waugh, Ganguly said, was so eager to win the Test and cross the final frontier for his ‘Invincibles’ side that he turned up five minutes early for the toss.

Meanwhile, Ganguly could not find his India blazer.

‘I came out dressed in all whites and the media manager asked where my blazer is. I said, ‘I don’t know, must be here somewhere’. I then wore someone else’s blazer and went for the toss,’ Ganguly recalled.

The Prince of Kolkata — who happily showed no signs of the double heart scares he has had this year — didn’t add that India led by V V S Laxman and Rahul Dravid mounted the greatest fightback in 21st century Test history to win the Eden Gardens Test, won the next Test in Chennai and the series. 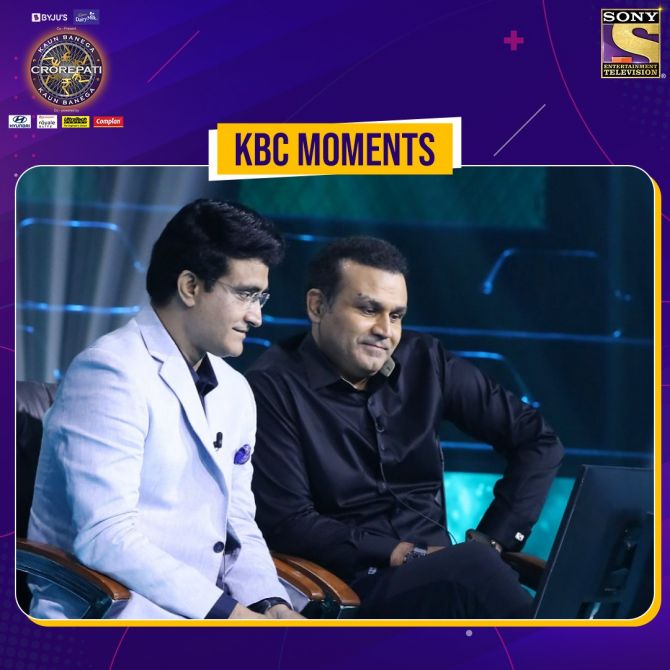 Sehwag called Ganguly the finest captain he played under and credited him for inspiring India’s cricketing renaissance which has lasted long after his stepping down as captain.

Ganguly also recalled an innings where he, the batsman at the other end, asked Sehwag to bat safe, being assured that he would indeed do so, only to see the Great Swashbuckler send one ball after another over the ropes that over.

Sehwag acknowledged he was Ganguly’s go-to man, not only to score runs, but also to pack his cricket kit after a game, a charge the former skipper denied.

‘Ask Sachin, Rahul Dravid, V V S Laxman,’ Sehwag told Bachchan in response, ‘and they will all confirm it.’

Bachchan asked Sehwag what song he sang when India defeated Pakistan. He didn’t sing any song to celebrate those victories, Sehwag said, and told the 79-year-old host who makes KBC a must watch every weekday night, ‘We would quote the dialogue from your film Shahenshah: “Rishte main to hum tumhare baap lagte hai“.’

On standby for 2019 World Cup, Navdeep Saini ready for his big moment

Explained: How destructive are locust attacks, how India tackles them