‘I have two more years in track and field and after that I will pursue my career in franchise cricket.’
Yohan Blake, winner of two Olympics gold medals and two silver medals, speaks to Rediff.com‘s Harish Kotian. 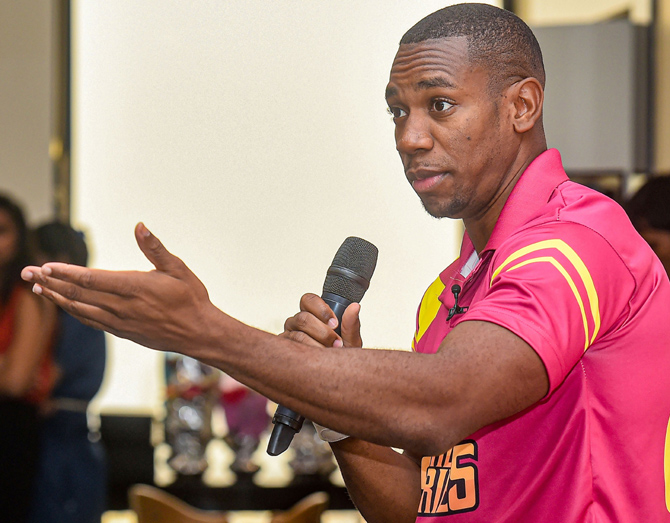 Olympic silver medallist Yohan Blake is still hoping for a crack at cricket after he hangs up his sprinting boots.

“Definitely, my dream is still alive to play cricket. I want to play the Masters. I am close, I have two more years in track and field and after that I will pursue my career in franchise cricket,” Blake tells Rediff.com.

The 29 year old won silver medals in the 100m and 200m at the 2012 London Olympics, finishing behind Jamaican compatriot and sprint legend Usain Bolt in both races.

In an interview with Rediff.com at the London Olympics, Blake had revealed how he wanted to take part in the Indian Premier League and show off his fast bowling skills.

Blake recalls how he dismissed fellow Jamaican Chris Gayle during a fun game. “The last time I bowled to him, I got him out. Usain (Bolt) took the catch. I haven’t got a chance to bowl to him recently because he keeps going in and out of the country,” Blake says on the sidelines of the jersey launch for the Road Safety World Series Masters T20 tournament in Mumbai on Monday, December 2.

Blake, who is aiming to finish his sprinting career with a gold medal at the 2020 Tokyo Olympics, plays cricket whenever he gets an opportunity. His fast bowling skill is good enough, he states, and he would love to test it against Virat Kohli.

“I would love to bowl to Kohli. The West Indies are playing against India in Mumbai (in a T20 International on December 11) and if I get a chance I would go and bowl to him,” he says.

Indian athletes, Blake says, can try and emulate Jamaica’s successful formula in sprinting while the West Indies can look to learn from India’s success on the cricketing field.

“I tell West Indies cricketers they have to emulate India — Virat Kohli and all those sort of cricketers. Nothing wrong if they emulate us in sprinting.”

Blake reveals he will travel to India after the Tokyo Olympics to groom young sprinters in the country. “After the Olympics, I am going to start a programme in India to harness the talent here. There is a lot of talent in India; if we show them what it takes to go to a different level, that is going to be easy,” he says.

“Not just Mumbai, we are targeting Delhi, Pune, Bangalore and Kolkata. We will draw the fastest person from these centres, so we will be doing event by event. Two weeks after the 2020 Olympics, we will come to India,” he adds.

“In Jamaica, there is lot of poverty; that’s where most of the sprinters come from. We use sprinting as a way to come out of poverty. If we can come to India and show this is what we are coming from, there is a billion people in India and a lot of talent.”

Plan to resume national camps from May end, says Rijiju

Game of Thrones Season 8, Episode 1: Everything You Need to Know