Gujarat Titans have been invincible in their debut IPL season. They have survives every close situation and triumphed in pressure situations.

Wriddhiman Saha got his side off to a flier, but his partner Shubman Gill struggled. Both openers fell and Sai Sudharsan and Hardik Pandya soon followed suit. As Gujarat lost wickets in a flurry, RCB seemed to gain a strong foothold in the contest when they reduced GT to 95/4 in the 13th over.

But whenever GT have looked down and out; in the end, they find a way to win matches.

Gujarat needed 76 runs from 42 balls at that stage and RCB had the momentum. David Miller then walked out to join forces with Rahul Tewatia. 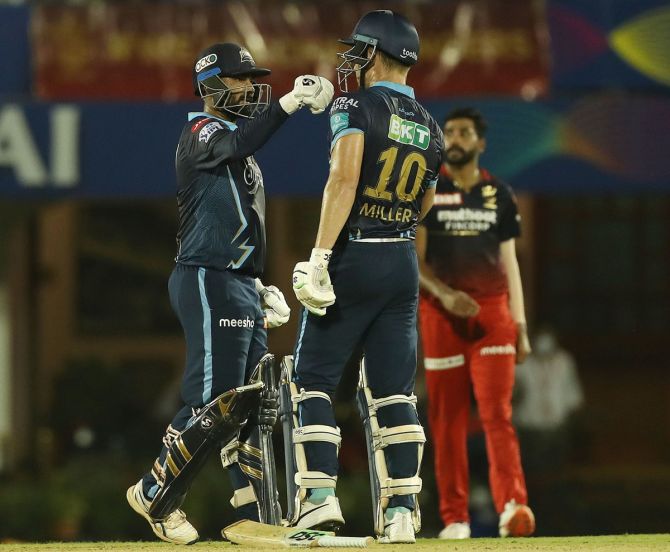 The two left-handers paced their partnership smartly and got the big hit when needed.

An unbeaten 79 run partnership for the fifth wicket off just 40 balls between Tewatia and Miller took Gujarat to their 8th win of the season.

Tewatia, displaying tremendous composure, finished off in style with a confident boundary off Josh Hazlewood as GT chased down 171 with six wickets and three balls to spare.

At the death, the experienced trio of Mohammed Siraj, Harshal Patel and Hazlewood couldn’t stem the flow of boundaries and RCB succumbed to a third defeat in a row.

Titans on the other hand have 16 points as they continue to dominate the points table.

From Huddersfield to Real Kashmir: How English footballer Kallum Higginbotham is adapting to political climates of Kashmir