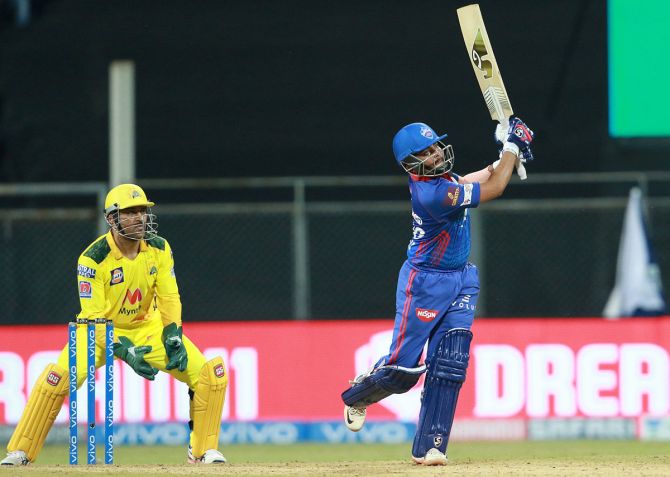 Rishabh Pant’s Delhi Capitals took on Mahendra Singh Dhoni’s Chennai Super Kings in the second game of IPL 2021 at the Wankhede stadium in Mumbai on Saturday.

It was 23-year-old Pant’s debut as IPL captain and he started off on the right note by electing to bowl after winning the toss.

Despite having CSK in check for most part of their innings, Delhi must have been disappointed as CSK broke away at the end courtesy Sam Curran (34 from 15 balls) to post a healthy 188 for seven in their 20 overs.

With the bat, Delhi proved unstoppable.

Twentyone-year-old Prithvi Shaw started off with a boundary off the second ball of the innings as he flicked Deepak Chahar through square leg.

Shaw looked keen to take on the bowlers in the Powerplay, lofting Chahar for a straight six in his next over.

Dhawan was not far behind either as he flicked Curran for a four through square leg before hitting a magnificent straight six back over the bowler’s head, while Shaw crashed the last ball through the covers for a four.

The two openers matched each other stroke for stroke, leaving spectators watching on television awestruck with their stroke-play.

Shardul Thakur was shown no mercy by his Mumbai team-mate as Shaw smashed him for a hat-trick of fours, before he clubbed Ravindra Jadeja wide off long-on for a six.

The openers laid the perfect platform for Delhi Capitals as they raced to 65 for no loss in six overs, making most of the fielding restrictions in the Powerplay.<

There was no looking back for Delhi from that stage as Dhawan and Shaw hit quickfire fifties to help DC make an emphatic opening statement with their crushing win over the three-time IPL champions.

Power infra set to get a boost

Recall: The case against Tahawwur Rana, the 26/11 plotter who was released and re-arrested in the US last week