Lucknow Super Giants booked their place in the IPL 2022 play-offs via a dramatic last ball victory over the Kolkata Knight Riders at the D Y Patil stadium in Navi Mumbai on Wednesday.

It was history in the making as Quinton de Kock scored a century and shared a record opening stand with skipper K L Rahul as LSG pipped KKR by two runs.

De Kock gave a batting masterclass enroute to an unbeaten 140 off 70 balls as he and Rahul (68 not out off 51) fired LSG to 210 for no loss, the highest opening stand in IPL history.

Both Rahul and de Kock started off slowly, taking a very cautious approach during the powerplay and slowly began cranking up the heat as the game went along and were in a sublime hitting spree in the death overs.

The South African hammered 10 sixes and as many fours in his whirlwind innings, while Rahul collected four sixes and three fours in his 51-ball 68 not out. De Kock, who was dropped by Abhijeet Tomar off Umesh Yadav in the third over, made KKR pay heavily by getting the highest score of the season. His memorable innings was also the third highest individual score in tournament history.

De Kock completed his hundred in style, hitting a boundary off Andre Russell on the off-side in the 18th over. On completing his century, de Kock dropped to his knees and seemed overcome with emotion as he shed a few tears while the entire Lucknow contingent were on their feet in admiration, giving him a standing ovation.

The century gave de Kock some much need vigour as he went after everything and seemingly found the boundary every single time that his bat made contact with the ball as evidenced by the three back-to-back sixes in the 19th over followed by four consecutive fours in the 20th.

In retrospect, it was one of the all-time great IPL knocks and in the larger scheme of things with the league phase done and the competition heading into its business end with the upcoming play-offs, both Lucknow and de Kock have hit their peak at the right time. 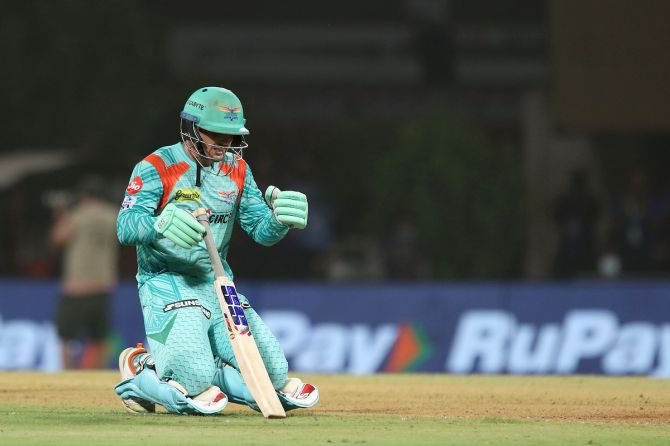 Asked about his animated celebrations following his century, he had this to say

‘It was a bit of frustration that came out. Felt really good to come out and do well,’ de Kock said. ‘Was trying to keep it in, but when it came out, felt good.’

Semenya misses Tokyo, may be forced out of Olympics for good