For Williams, who has won seven singles titles at Wimbledon and another six in women’s doubles, the relatively brief run with Murray, a Scot with two Wimbledon championships of his own, was something to savour. 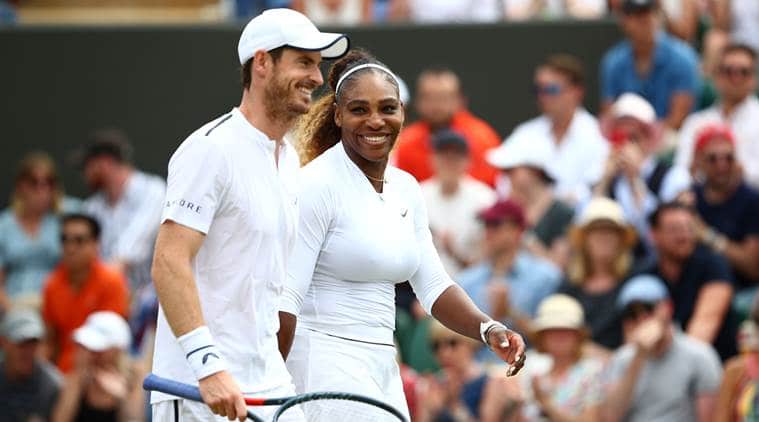 After two wins together, the mixed dream team doubles pairing of Serena Williams and Andy Murray was knocked out in the third round of Wimbledon on Wednesday, falling to the top-seeded team of Nicole Melichar and Bruno Soares, 6-3, 4-6, 6-2.

The addition of the singles stars brought exponentially more attention to the normally overlooked mixed doubles competition — so much more that Soares said he had to remind himself to keep the stakes in mind as they played before a packed crowd on No. 2 Court.

“It’s such a different atmosphere for a third-round mixed match that it’s actually strange, everything that’s going on,” Soares said. “At the end of the day, it’s a third-round mixed doubles match, so if you overthink the situation, it might get too complicated.”

Soares was able to dominate the match at the net, ensuring an end to a partnership that had captured the hearts and imaginations of fans at Wimbledon during their brief run.

For Williams, who has won seven singles titles at Wimbledon and another six in women’s doubles, the relatively brief run with Murray, a Scot with two Wimbledon championships of his own, was something to savour.

“To play on this stage with Andy, who has done so well here for so many years, is literally just a lifetime experience,” said Williams, who will play a singles semifinal Thursday. “I’m so happy that I got to experience it.”

It was an experience that came about from unusual circumstances. Murray, who had hip surgery in January, is working himself back into shape by playing doubles. Williams, who had been slowed by knee pain for months, was also short on match play coming into Wimbledon.

But opportunities for such cross-pollination between the tours are exceedingly rare. Mixed doubles is played only at the Grand Slam events and the Olympics as well as in the summer World Team Tennis league. It is not a part of the program at any of the 14 combined ATP-WTA tournaments, or at the NCAA championships.

That lack of growth in mixed tennis events runs counter to wider trends. Sports from swimming to luge have created more mixed-gender events in recent years.

“I’d love to see more mixed; it could be great for the sport,” Soares said. “Everyone talks about equal rights and all those things we discuss these days; I think bringing men and women together on the court is something special for today’s world.”

Melichar, who won the mixed doubles title at Wimbledon last year, said she thought headline-worthy tandems might continue to emerge if given the opportunity.

“Mixed doubles is such a special sport, and so much fun for us to play,” she said. “If they did expand it at more events, I think you’d see players like Serena and Andy — who normally don’t play doubles at Indian Wells or Miami — maybe they would play mixed, and it would be good for TV and for doubles.”

The Williams-Murray pairing was such a big deal that their first two matches were played on Centre Court.

Williams said she saw recreational mixed doubles being played frequently around her Florida home, but she sounded a more pessimistic note about fitting another competition into crowded tournament schedules.

“The schedule is already so, so difficult,” she said. “It sounds good, it sounds really exciting, but the big question is: Will it work? Will one of the tournaments take a chance on it? Maybe. We’ll have to see. It’s all about trying; who knows if it will work or not?”

One person willing to try is Mark Ein, the longtime owner the Washington Kastles, a World Team Tennis team, who recently bought the ATP-WTA tournament in Washington. Ein was not able to add a mixed doubles event in time for this year’s tournament, which begins July 29, but remains optimistic for future editions.

“We would love to do a mixed event as part of the D.C. tournament, and we’re actively exploring it,” Ein said. “It just isn’t easy with the schedules, outside of the Grand Slams, to make it work when you have to fit all the matches in a week. Players are somewhat eager to move to the next tournament once they’re out.”

Ein cited the excitement over Williams and Murray, as well as the pairing of Venus Williams and Frances Tiafoe, as reason to invest in the format.

“I think when you look at how fans react to mixed doubles, they love watching it,” Ein said. “When you watch the players play it, you see true joy and love of the game. I think that translates to the fans. It just brings a different, very special element to an event.”

What is next for Murray is unclear. After suggesting in January that he may retire after Wimbledon, he says he is now pain-free after a second hip surgery. He won the men’s doubles title with Feliciano López at Queen’s Club last month, but he lost in the second round at Wimbledon with Pierre-Hugues Herbert. On Wednesday, despite persistent questioning, Murray did not offer a timeline for his plans, not even committing to the U.S. Open in August.

Williams, who did three news conferences with Murray, got an up-close look at his relationship with British reporters.

“Andy gets asked every question about his body and the U.S. Open,” Williams said, smiling. “Literally every question in a different way, but it’s the same question.”

The death debate: on Justice Joseph’s views on capital punishment