South Africa dug deep to deny Australia a 3-0 series sweep with a battling draw in the rain-disrupted third Test at the Sydney Cricket Ground on Sunday, finally finding some fight on the final day of a miserable tour.

The hosts, who declared on 475-4 on Saturday to try and force a result, dismissed South Africa for 255 in their first innings after lunch to enforce the follow-on, but came up short in their bid to bowl out the tourists again.

Sarel Erwee and Temba Bavuma guided the Proteas to stumps on 106 for 2, enabling the tourists to take something out of the series after being thoroughly outclassed in the first two matches in Brisbane and Melbourne.

Remarkably, it was the first draw in 47 Tests for South Africa going back to a match against New Zealand in Hamilton in March 2017.

Australia will still take huge confidence out of a dominant home summer in which they also beat West Indies 2-0 before putting South Africa to the sword.

“Fourteen wickets was a hard ask, if we didn’t lose a day to rain who knows what might have been,” said pace bowler Josh Hazlewood.

“It would have been nice to see the wicket after five days of traffic to see how that played, if it was back to the old school SCG, but it was good fun today.” 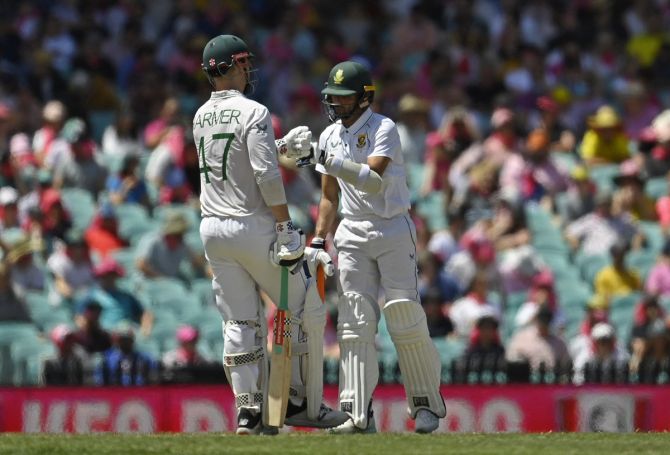 Their hopes of sweeping both series and securing a place in June’s World Test Championship final were indeed dashed in the main by the Sydney weather that took the best part of two days out of the final Test.

Tailenders Simon Harmer (47) and Keshav Maharaj (53) played a big part too under sunny skies on Sunday with a partnership of 85 for the eighth wicket that extended South Africa’s first innings well into the afternoon.

Hazlewood (4-48) removed them both in a dazzling post-lunch spell and Nathan Lyon sent back Kagiso Rabada with a diving catch from his own bowling to bring an end to the innings and give Australia a first innings lead of 220.

Dean Elgar, the first captain to lead South Africa to defeat in Australia since Graeme Smith in 2005/06, opened the second innings but was soon dismissed to continue his terrible run of form.

Edging behind to fall to his Australian counterpart Pat Cummins for the fourth time in the series, he scored 10 runs to take his series tally to a paltry 56 from six innings at an average of 9.33.

After that breakthrough, Cummins and Hazlewood kept pounding in, but spinners Lyon and Ashton Agar at the other end had little to work with from a pitch that had not had enough traffic to deteriorate as much as they would have liked.

Lyon thought he had dismissed Heinrich Klaasen, caught by Steve Smith in the slips for 28, but for the third time in the match the third umpire ruled the ball had grazed the grass between the fielder’s fingers.

Hazlewood clean-bowled Klaasen for 35 a couple of overs later with a peach of a delivery, but opener Erwee, who scored 42 not out, and Bavuma, unbeaten on 17, successfully fought the rearguard action until Cummins conceded the draw.

“It’s good to end tournament like this,” said Elgar. “Touring Australia is never easy but the message to the group yesterday and last night was to fight out there on day five.”

The Don’s Dozen: 12 amazing stats about Sir Donald Bradman on his birthday

#RIPWadekar: ‘His contemporaries worshipped him, such was his aura’