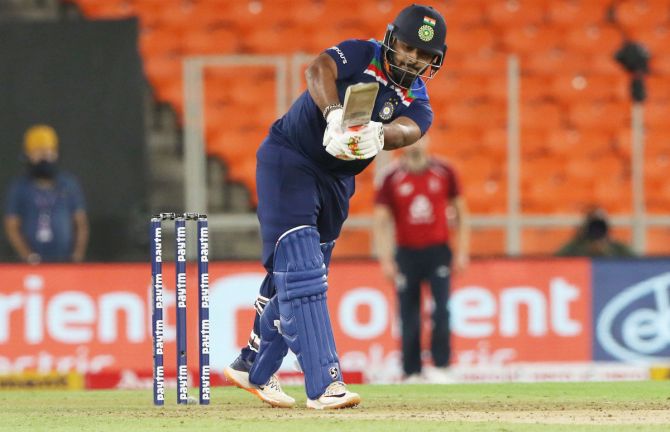 Fresh from their clinical showing in the opening ODI on Tuesday, India will look to continue their winning run and seal the three-match series in Friday’s second game in Pune.

Opener Shikhar Dhawan was rightfully handed his place in the ODI team and responded with a magnificent 98, putting on 105 runs for the second wicket with Virat Kohli, who stroked a fluent 56.

The biggest positive for India was K L Rahul getting back among the runs as he smashed 62 from 43 balls after being preferred as the wicket-keeper-batsman ahead of Rishabh Pant in the ODI team.

Debutant Krunal Pandya stole show with his batting blitzkrieg when he slammed an entertaining 58 from 31 balls to turn the Indian innings on its head in the death overs.

Along with Rahul, he took apart the England bowlers during their unbroken 112 run stand for the sixth wicket from just 57 balls to power the hosts to 317 for five in 50 overs.

And with the ball too, it was another debutant who left an impression.

Karnataka pace bowler Prasidh Krishna showed great heart to bounce back after being taken for runs in his first spell, taking 4 for 54, the best ODI debut figures by an Indian bowler.

The only blow for India from that game was the injury to Shreyas Iyer who dislocated his shoulder while fielding which ruled him out of the last two ODIs and could see him miss IPL 2021.

India have a couple of world class replacements ready to step in for Shreyas in his Mumbai team-mate Suryakumar Yadav and the dashing Rishabh Pant.

Surya played a couple of sparkling innings in the T20I series while Rishabh has been in unbelievable form since the tour of Australia.

Rohit Sharma also took a blow on the elbow while batting against Mark Wood. If India decide not to risk Rohit with the IPL starting next fortnight, then Shubman Gill could come in at the top of the order.

Kuldeep Yadav, who featured in just one ODI in the last one year, struggled to make an impact on a flat wicket as he was taken apart by Jonny Bairstow. It has been a huge twist in fortunes for Kuldeep, who, only a couple of years ago, was looked upon as the future of Indian spin bowling.

The team management could back Kuldeep by giving him Friday’s and Sunday’s games or push him back him to the sidelines like they have been doing in recent months and bring in Yuzvendra Chahal, India’s preferred spinner in the last couple of years.

Who would you pick for Friday’s second One-Day International? Please click on the options below and share your team with your friends!

Assessment in school education to be transformed by 2022, NCERT to develop guidelines soon: HRD

HIT trailer: A curious case of a missing girl

Renée Zellweger opens up about why she took a break from acting, plastic surgery rumors