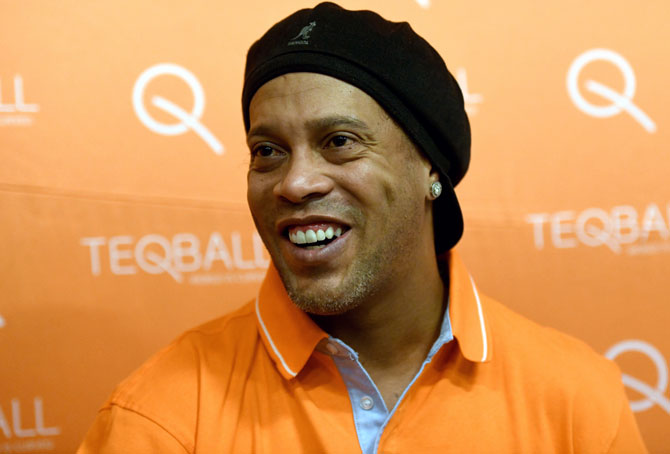 Paraguayan prosecutors will not charge Ronaldinho Gaucho for possession of an altered passport, but the former Barcelona player has admitted guilt and agreed to face an alternative punishment, the lead official in the case said on Thursday.

Ronaldinho and his brother and business manager Roberto Assis both entered Paraguay on Wednesday with false documents, officials said. After being stopped by law enforcement officials they spent much of Thursday helping police with their enquiries.

Prosecutor Federico Delfino said the brothers recognised they had committed a crime but said they did so unwittingly.

“We are looking for an alternative way out of this that doesn’t result in a formal accusation and that recognises that these people were, we can say, taken by surprise,” Delfino told reporters in the Paraguayan capital.

A judge will decide whether to accept Delfino’s recommendation on Friday. If he does, he will rule on an alternative punishment, possibly a fine payable to a local charity.

Ronaldinho’s lawyer Adolfo Marin could not be reached for comment.

The brothers left Guarulhos airport in Sao Paulo on Wednesday with Brazilian passports and were given Paraguayan ones “as soon as they got off the plane” in the Paraguayan capital.

The men said the passports were a gift and an investigation indicated the numbers on the passports corresponded to other people, Delfino added.

Marin said Brazilians do not need a passport to travel between Brazil and Paraguay, both of which are members of the Mercosul bloc.

He could not explain why they showed Paraguayan passports when they had travelled recently on their Brazilian passports to China, Europe and the United States.

The brothers were invited to Paraguay by a local casino owner and had arrived on Wednesday to take part in a soccer clinic for children and a book launch.

The 39-year-old was the best player in the world at his peak in the early part of this century.

Masood Azhar terror listing: A victory for India and its diplomacy, says BJP