Djokovic stunned by Greek teen Tsitsipas in Toronto third round Greek teenager Stefanos Tsitsipas secured the biggest win of his career when he sent Wimbledon champion Novak Djokovic packing in the third round of the Rogers Cup with a stunning 6-3, 6-7(5), 6-3 win on Thursday.

A confident Tsitsipas sent a blistering forehand to the back corner while the ninth-seeded Serbian was heading the other way on his first match point to secure the win before looking at his box in disbelief.

“It’s a dream of any kid out there in this world, any kid that’s playing tennis, to beat these kinds of players, so I can call it the best moment of my life,” a shocked Tsitsipas said in an on-court interview. “I never expected to beat such a top-ranked player and such a high-respected player like Novak.”

Tsitsipas, who turns 20 on Sunday, relied on his serve and forehand combination to get by Djokovic, who was competing in his first tournament since collecting his 13th grand slam title at the All England Club last month.

The Greek teen made some crucial errors near the end of the second set that allowed Djokovic, a four-time winner of the tournament, to set up a decider.

However, Tsitsipas did well to break Djokovic for a 2-0 lead in the third set and never looked back.

For the resident of Athens, who arrived in Toronto fresh off a run to the semi-finals in Washington where he lost to German world number three Alexander Zverev, the win is the latest in a breakthrough campaign during which he has reached the quarter-finals or better at seven ATP main tour events.

Tsitsipas, who beat Austrian seventh seed Dominic Thiem in the second round here, will next face either second seed Zverev or Russian qualifier Daniil Medvedev.

Halep outlasts Pavlyuchenkova to reach third round in Montreal 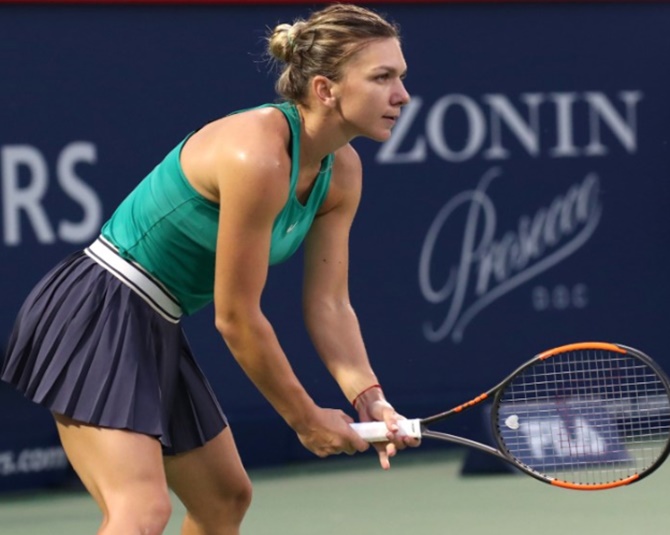 Top seed Simona Halep grinded out a 7-6(9), 4-6, 7-5 win over Russian Anastasia Pavlyuchenkova at the Rogers Cup in Montreal on Thursday but will have little time to rest ahead of her third-round clash with Venus Williams.

Halep, whose match began on Wednesday but was halted because of rain with Pavlyuchenkova ahead 4-3, returned to close out a three-hour battle during which she required treatment for what appeared to be blisters on the bottom of her right foot.

The Romanian world number one will have a quick turnaround as she is set to cap the evening session with a battle against seven-time Grand Slam winner Venus Williams, who will also not be fully rested after beating Sorana Cirstea 7-6(4), 6-4 in a match that was postponed from Wednesday.

“I’m little bit dead, to be honest. It’s a long time since I played my last match at Wimbledon. I will try to do my best to recover and fight next match,” Halep said in her on-court interview.

“She’s a champion and it’s always difficult to play against her. On hard courts, it’s more difficult. I will try to enjoy it and to have a nice atmosphere again.”

Johanna Konta, who was leading former world number one Victoria Azarenka 6-3, 3-0 on Wednesday before rain forced an overnight delay, returned to wrap up the match 6-3, 6-1.

Up next for the British number one will be a clash with defending champion Elina Svitolina.

US Open champion Sloane Stephens, the third seed, beat Spain’s Carla Suarez Navarro 6-2, 7-5 to book her spot in the quarter-finals, where she will face Latvia’s Anastasija Sevastova, a 6-3, 7-6(2) winner over German 10th seed Julia Goerges.

SC to rule on BCCI chief Ganguly’s tenure in January