‘You have to be focussed 100 percent, that is the quality of the IPL.’
‘If your preparation is not up to the mark, you will face a lot of problems.’

Rashid Khan is arguably the most sought-after spinner in T20 leagues around the world.

The Afghanistan spin ace boasts the best economy rate in the IPL with 6.33 (among bowlers taking 50 wickets or more).

Rashid Khan played five years for the Sunrisers Hyderabad, picking up 93 wickets in 76 games before he decided to seek a fresh challenge as he signed up for the Gujarat Titans, one of the two new franchises in IPL 2022.

Rashid Khan, who grew up in war-torn Afghanistan, says with players like him, Mohammad Nabi and Mujeeb-ur-Rahman playing in a big tournament like the IPL, it has given hope to youngsters in Afghanistan that despite the harsh circumstances in their country they can also make it big if they work hard and have the required skills.

You have been with the Gujarat Titans for a few days now and have trained with your new team-mates. How has the team atmosphere been and how excited are you for the debut of this new team?

It was a couple of great sessions with the boys. I really enjoyed a couple of weeks off from the game and now I am back with a new IPL team, with new team-mates. I enjoyed my practice with them and I am super excited to start my new journey with the Gujarat Titans. I am looking forward to the new season of IPL, will give my 100 percent in every department and enjoy my game.

You have played in various T20 leagues around the world. How different and how big is the IPL and what sort of impact has it had on cricket?

I have played all around the world, but when it comes to IPL it is a different kind of pressure. As a player when you play in the IPL, every opposition is tough to bowl against and tough to face as a batter. That is the quality of the IPL, you hardly have any easy games.

If your preparation is not up to the mark, you will face a lot of problems.

That is the difference the IPL brings in the game, if you compare it to the other leagues.

How crucial is the role of leg-spinners in T20 cricket? Should they always be used as attacking options in this format?

Like, if the batting team has a good partnership, then the opposition will look to bring in a leg-spinner who can provide the breakthrough.

Leg-spinners have become so much effective in T20 cricket and the reason is that they have so much variety now. They bowl different deliveries at different stages to trouble the batters and that is the reason they are more successful now.

Your Afghan team-mate Rahmanullah Gurbaz has joined the Gujarat Titans as a replacement for Jason Roy. He comes with a reputation of being a dangerous batter in T20 cricket. Tell us more about him.

He is very dangerous. The kind of cricket he has played since coming into the Afghanistan team, he is one to watch out for.

He already has scored 3-4 hundreds in 10-11 ODIs, which is massive for someone young like. He has taken responsibility with the bat for Afghanistan.

But when you come to the IPL, it is a different experience, you need to be more prepared and mentally very strong as well. I think he will need a little bit of time just to get used to the conditions, understand the game and see how much more hard work is required to achieve his targets.

I am sure he has that positive mindset and approach, he will deliver in this IPL as well. A couple of months in the IPL will be huge for him and for his cricket, he will learn a lot and the experience will help improve his game and become a better batter. 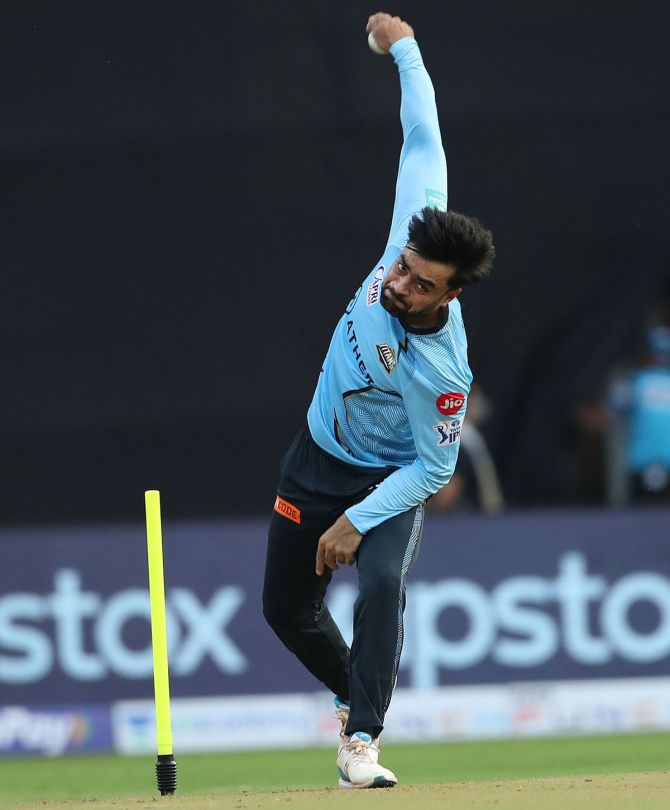 With players like you, Mujeeb ur Rahman, Mohammad Nabi playing in the IPL and various T20 leagues over the years and youngsters like Gurbaz and Noor Ahmad coming in IPL 2022, how much has it encouraged more Afghanistan cricketers to take up cricket and try to showcase their skills around the world?

It has motivated so many youngsters in Afghanistan since we started playing in the IPL. The mindset of the youngsters back home has changed since the IPL started, everyone loves cricket.

Some players from Afghanistan are playing in leagues around the world, so it has given the youngsters belief that it is not like that we are from Afghanistan so we won’t get that opportunity.

When they watch us play in the IPL, they are clear in their mind that if we are good enough, we work hard and we have the skill and ability, we will be able to play at that level too.

All youngsters in Afghanistan have the dream to play at this level and at this stage. The IPL is huge and when you perform in a tournament like the IPL, it motivates everyone back home in Afghanistan, I would say not only Afghanistan, but to every youngster all around the world.

The youngsters, who are watching us play, they get motivated to play cricket.

You played five years for the Sunrisers Hyderabad. Does it feel strange or kind of different turning out for a new team?

Strange things come in your mind when you are new, it doesn’t matter if it is sports or any other field. There will be a strange kind of feeling that this is a new team, new captain and other things.

But at the same time, you shouldn’t forget your own skills, something you need to focus on, which will help you in the middle.

I should remain the same and I will just focus on that and look to repeat the good performances when the team needs me.