Argentine Santiago Cutaia, 34, had never felt the elation of his country winning the soccer World Cup before, born two years after late icon Diego Maradona last hoisted the trophy aloft for the Albiceleste in 1986. He has now.

His generation, who grew up after the peak of Maradona, witnessed for the first time, their team become world champions on Sunday, beating France on penalties in a whipsaw final. It was the third World Cup for Argentina, but the first in 36 years.

“I am 34 years old and I had never seen Argentina become champions before,” said Cutaia as he celebrated with hundreds of thousands of fellow fans in the centre of Buenos Aires wearing his blue-white team jersey and sunglasses.

The win was also a first for star player Lionel Messi, galvanizing his claim to be the world’s greatest player. Messi has long lived in the shadow of Maradona in Argentina, who fans still adore with almost God-like status.

“To celebrate it here with everyone and having the bonus that Messi got the trophy is an unexplainable happiness,” added Cutaia, who said France’s comeback that almost turned the game on its head late on had been tough emotionally for the fans.

In the streets of the capital, revellers partied early into the hours of Monday. Fans climbed onto bus stops and lamp-posts, blared horns, banged drums and set off fireworks into the night sky. Some even climbed the tall Obelisco monument. 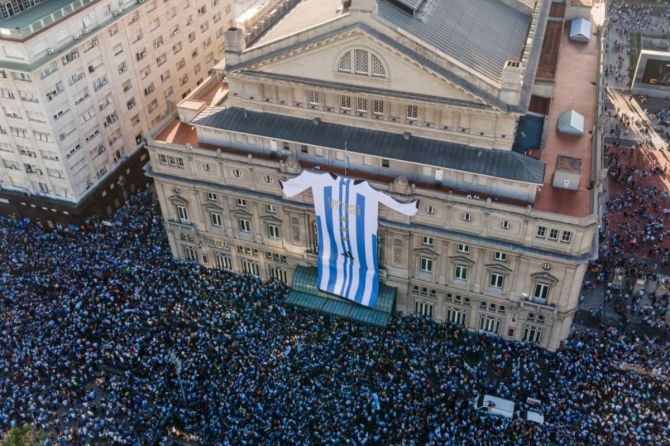 “It’s crazy, look at this. It’s the first time I live through this,” said fan Valentin, partying in the city with Argentine flags painted on his face.

“I still can’t believe it. I’m very happy. Messi deserved it for a long time. I thank the team for what they have done.”

The World Cup had been the one piece of silverware missing for Messi, 35, who has broken multiple records playing for club teams Barcelona and Paris St Germain.

He also won the Copa America with Argentina in 2021. Sunday’s final was likely his last World Cup game for his country. Matias Cardinalli, wearing the team jersey with two stars above the crest, it’s now three, said he had started watching World Cups in 1998 when France won. Since then Argentina has reached one final, losing in 2014 to Germany.

“Today I was watching it with my friends and it’s crazy, it is such a joy, I still can’t believe it. I will never forget sharing it with friends, with family, coming here with the people,” he told Reuters amid the huge street party.

“This brings the people together and I’m really happy. I have no words.”

Vikrant Massey on filming intimate scenes with Bhumi Pednekar: ‘Only concern was my beard scratching her face’

World Cup 2019: Sachin Tendulkar says Virat Kohli needs others to step up for India to win