A round-up of Saturday’s action in Serie A, La Liga and Bundesliga.

Lacklustre Juventus began life without Cristiano Ronaldo by suffering a surprising 1-0 defeat at home to promoted Empoli in Serie A on Saturday.

Juve, who this week agreed a deal with Manchester United to sell Ronaldo to the Premier League club, looked shorn of ideas up front in the Portuguese forward’s absence.

Other than some fierce Federico Chiesa strikes from range, the hosts did not threaten to score in the first half as Empoli edged into a surprise lead when captain Leonardo Mancuso swept the ball home at the far post in the 21st minute.

After the break, Juventus coach Massimiliano Allegri introduced Alvaro Morata, Dejan Kulusevski and new signing Manuel Locatelli from the bench but, even with all that firepower on the pitch, they created few openings of note.

Empoli saw out their first win back in the Italian top flight in relative comfort, leaving Juve on one point from their opening two matches of the season.

“It’s a difficult moment,” Allegri told DAZN. “We need to grow, we have to face our problems together.

“There have been too many players who have done things poorly who don’t usually drop to that standard.”

Having started the season with a 2-2 draw at Udinese, Juve, even without Ronaldo, were widely expected to have too much for their newly-promoted opponents.

Chiesa, who came in for Ronaldo, almost broke the deadlock early on from distance, but his arrowing effort was brilliantly saved by Empoli goalkeeper Guglielmo Vicario.

That was as good as it got in the first half for Juve, with the visitors breaking well and creating the opening for Mancuso, who reacted quickest to the loose ball in the area to fire home.

Juve supporters let their feelings be known as attack after attack broke down, with Paulo Dybala especially guilty of some wayward passing.

The home side threw everything at their opponents late on but apart from Locatelli’s dragged effort wide, an equaliser never looked likely, with that Ronaldo-shaped hole a tough one to fill.

Juve failed to win their first two league matches at the start of a season for just the third time in their last 52 top-flight campaigns. 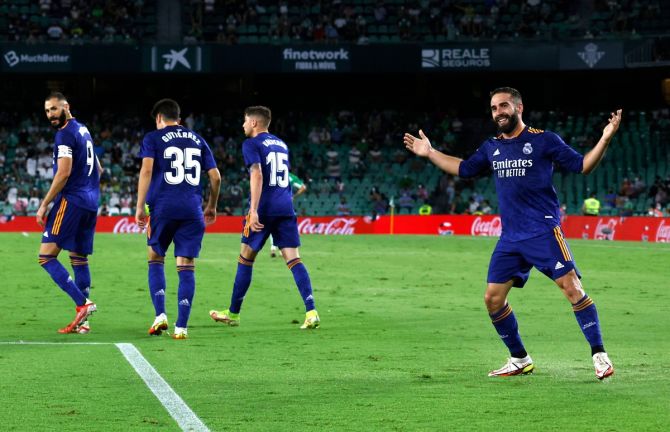 Real Madrid defender Dani Carvajal celebrated his return from a long injury lay off by firing his side to a 1-0 win at Real Betis in LaLiga on Saturday.

Carvajal volleyed home a cross from Karim Benzema to break the deadlock in the 61st minute in his first start for Real since April after missing most of last season and the European Championship due to a series of injuries.

Carvajal struck immediately after Betis had squandered a glorious chance to take the lead when they won the ball deep in the visitors’ half but striker Juanmi misplaced a pass when he had the opportunity to shoot.

Betis had a chance to snatch an equaliser deep in added time and Madrid were grateful to keeper Thibaut Courtois for getting across goal to keep out a low drive from Martin Montoya.

Carlo Ancelotti’s Madrid side provisionally lead the table on seven points after their first three games, all of which have been away, having beaten Alaves 4-1 and drawn 3-3 with Levante.

Betis have two points and remain without a win.

In other matches of the day, Sevilla had to make do with a point as they were held to a 1-1 draw at Elche, ending their 100 per cent start to the season, while Real Sociedad beat Levante 1-0 at home thanks to an Ander Barrenetxea strike shortly before half-time to reach six points and end the visitors’ unbeaten start to the campaign.

“The goal meant a lot to me as I’ve had a long difficult time on a personal level. I’ve spent so long working hard behind the scenes to get fit again and hopefully this year will be different,” Carvajal said.

Real were missing key players with Luka Modric, Toni Kroos and Ferland Mendy injured while Eden Hazard was dropped to the bench by Ancelotti, who picked Vinicius Jr from the start after the Brazilian scored two goals as a substitute at Levante. 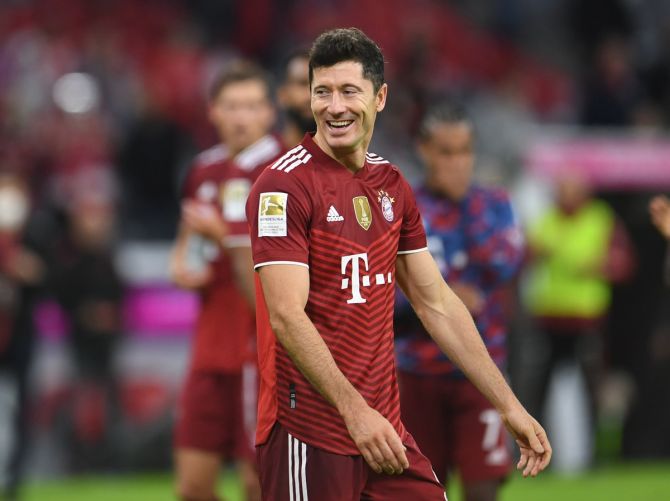 Bayern Munich’s Robert Lewandowski continued his imperious form with a superb hat-trick as they cruised past Hertha Berlin with a 5-0 win at the Allianz Arena on Saturday.

The Poland striker has scored at least once in each of his last 16 official matches for Bayern, bettering Gerd Mueller’s record of netting in 15 consecutive games between 1969 and 1970.

In other matches, Bayern Leverkusen had plenty of help as they won 4-1 at Augsburg on Saturday to top the Bundesliga, with the hapless hosts gifting them two own goals in the opening 14 minutes.

Freiburg’s Jeong Woo-Yeong scored twice in the opening nine minutes as they raced into a 3-0 lead against VfB Stuttgart by the half-hour mark and while the home side fought back with two goals just before halftime they eventually lost 3-2.

Arminia Bielefeld recorded their third draw in three Bundesliga games but it took an 86th-minute goal from Austrian midfielder Patrick Wimmer to secure a share of the spoils in a 1-1 draw at home to Eintracht Frankfurt.

Cologne’s Tim Lemperle struck a stoppage-time winner as they edged Bochum 2-1, while Mainz had no problems against Greuther Fuerth, winning 3-0 at home.

Speaking about his sensational form, the 33-year-old said: “It’s due to a lot of things, I’m always hungry. I feel very good, I feel much better than a few years ago. I still want to get better and improve.”

The victory left Bayern second in the Bundesliga, behind Bayer Leverkusen on goal difference, with seven points from three games. Hertha sit bottom of the table having lost all their games so far.

Thomas Mueller struck for the German champions after six minutes, finishing off a slick team move, before Lewandowski doubled the advantage half an hour later, heading in from a Serge Gnabry cross.

“Sometimes the first goal is the most important. I saw that Thomas was running behind me. He had called for the ball… that (the dummy for the opening goal) was also a small thank you to Thomas for all his assists,” added Lewandowski.

Hertha did their best to press Bayern higher up the pitch but struggled to create clear opportunities as the home side’s wide men took full advantage of the space left behind.

Bayern continued their assault in the second half, with substitute Jamal Musiala grabbing a third soon after the break and Lewandowski adding two more for a hat-trick, his second goal made possible by some brilliant wing play from Leroy Sane.

India vs Australia: We complement each other well – David Warner on partnership with Aaron Finch

Too difficult to change anything with people at SAI or AFI: India’s javelin coach Uwe Hohn

For stencil cutters of Palakkarai, elections are no longer the same

Jon Favreau: ‘The Mandalorian’ season 2 on track to arrive in October