Andy Murray may have been the forgotten man at the US Open but gave the crowd and Stefanos Tsitsipas a match to remember, forcing the third seed to grind out a 2-6, 7-6(7), 3-6, 6-3, 6-4 win on Monday and avoid the opening round shocker.

In the buildup to Flushing Meadows all the talk had centred around the Big Three, Novak Djokovic’s hunt for the calendar-year Grand Slam and the absence of Roger Federer and Rafa Nadal.

But Murray reminded everyone there was a fourth Beatle in that dominant group as he turned back the clock on Arthur Ashe Stadium court looking more like the player who won the 2012 US Open title than the injury ravaged 34-year-old.

“I’ve said it a lot over this last few months that I know I’m capable of playing that tennis,” said Murray, still fighting his way back to form after career-threatening hip surgery. “I need to spend time on the court, getting the chance to play against these guys.

“I proved some things to a certain extent. Obviously didn’t win the match tonight.

After reaching the final of the French Open, Tsitsipas arrived in New York and ready to take that final step to Grand Slam champion only to nearly stumble at the first hurdle, needing almost five hours in punishing conditions to see off the former world number one.

In the end the question was always going to be how much fuel did Murray have left in the tank and the answer was not enough.

After four hours in the sweltering heat that left both men bathed in sweat, the fifth set began with Tsitsipas grabbing the early break while Murray complained with courtside officials about Tsitsipas spending too much time in the bathroom.

A fired up Tsitsipas would continue to apply the pressure but the one break was all that would be needed.

While Murray may have lost a step, his warrior spirit remains intact as he provided the young Greek with a tennis master class in the first set.

After Tsitsipas held serve to open the match Murray stormed through the next five games. 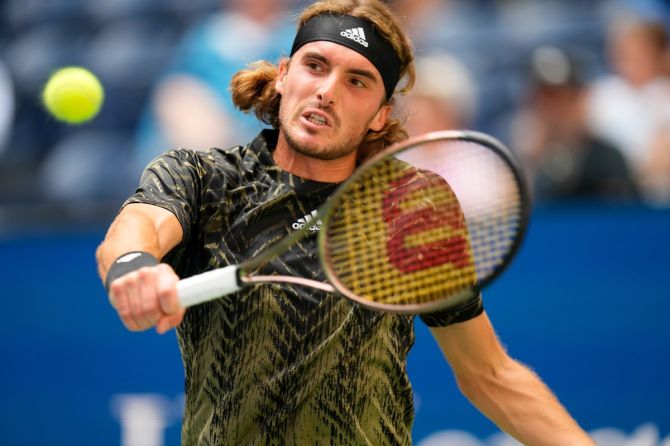 With fans back in Arthur Ashe Stadium after it stood empty last year due to the COVID-19 pandemic, the massive arena bubbled with energy that Murray tapped into using the support to full advantage.

Tsitsipas meanwhile was using the rules to his advantage, leaving Murray accusing the Greek of cheating by taking bathroom breaks, medical timeouts and changing racquets in an attempt to unsettle him.

If that was Tsitsipas’ plan it worked, particularly in the crucial fifth set, as a distracted Murray angrily offered his opinion to the chair umpire, courtside officials and anyone else in ear shot.

“I think he’s a brilliant player. I think he’s great for the game but I have zero time for that stuff at all,” said Murray. “I lost respect for him.”

Murray was particularly upset not only with the timing of Tsitsipas’ bathroom breaks but the length with one lasting eight minutes.

For his part Tsitsipas noted that he had simply followed the rules.

“I don’t think I broke any rules,” said Tsitsipas. “I’m playing by the rules and sticking to what the ATP (Association of Tennis Professionals) says is fair, then the rest is fine.”

‘A magician with a hockey stick’

What Time Does ‘iCarly’ Premiere On Paramount+? Get All The Details Here!

Tiger Woods now hopeful of having a busy golf schedule