Manchester City, last season’s Champions League runners-up, crushed RB Leipzig 6-3 in a thrilling Group A game on Wednesday as Christopher Nkunku scored a hat-trick for the German side.

It was a hugely entertaining match at the Etihad Stadium and although City manager Guardiola will be happy with the three points he will be concerned about the spaces his team left for the German side to exploit on the break.

Nkunku became only the fourth player to score a Champions League treble and end up on the losing side and he deserved his player of the match award as Leipzig showed real spirit to keep fighting back against City’s impressive firepower.

Defender Nathan Ake put City ahead in the 16th minute with a header from a Jack Grealish corner and the hosts doubled the lead 12 minutes later when Kevin De Bruyne produced wonderful skill to leave three defenders for dead before his deep cross was headed into his own net by Leipzig defender Nordi Mukiele.

Leipzig got back in the game with a 42nd-minute header from Nkunku, only for City to restore their two-goal advantage on the stroke of halftime.

Lukas Klostermann was ruled to have handled after the referee went to the pitchside monitor to check the incident and Riyad Mahrez blasted home the spot-kick.

Leipzig were not deterred, though, and Nkunku reduced the deficit again in the 51st minute by heading in a cross from the excellent Spanish midfielder Dani Olmo.

Grealish then delivered a wonderful solo goal to mark his first European club appearance, collecting the ball on the left flank and jinking inside before giving Peter Gulacsi no chance with a curling shot into the far corner.

That was surely that, the City fans could be forgiven for thinking, but once again French forward Nkunku kept the game alive, completing his hat-trick with a crisp drive after being set up by Yussuf Poulsen.

Incredibly, City responded immediately with an unstoppable long-range drive from Portuguese full back Joao Cancelo and any hopes the visitors had of a comeback ended when they went down to 10 men when former City full back Angelino was sent off in the 79th minute.

Substitute Gabriel Jesus added the sixth from close range five minutes from time and the home crowd were delighted with the display of Grealish, in front of his England manager Gareth Southgate.

“I loved it,” Grealish said of his first taste of the competition.

“I’ve been waiting a while. The past few weeks, I couldn’t wait for this game. It’s a great night.

“It was one of those games. It had absolutely everything. In the end we’re delighted to get the win against a good team full of energy and young players,” he said.

City lead the group on three points after Paris St Germain were held to a 1-1 draw at Club Brugge in their opener. 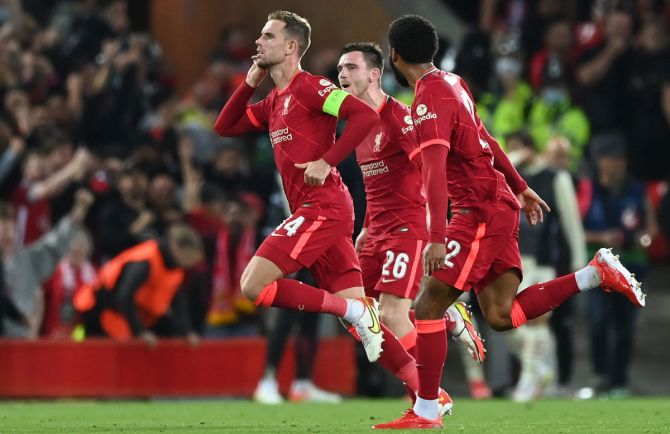 Liverpool captain Jordan Henderson struck a rare Champions League goal to earn his side a 3-2 victory over AC Milan in a rip-roaring Group B opener at a rocking Anfield on Wednesday.

Henderson rifled home in the 69th minute to settle an absorbing contest between the two European heavyweights whose only two previous meetings had been in finals.

With Anfield welcoming back fans for a Champions League night for the first time in 18 months, Liverpool had threatened to run riot when Fikayo Tomori’s own goal handed them an early lead in a barnstorming start.

Remarkably, after weathering the storm which included a Mohamed Salah penalty miss, Milan struck twice in quick succession at the end of the first half with Ante Rebic and Brahim Diaz silencing the home crowd.

Milan then had a goal disallowed shortly after the break before Salah made amends for his penalty miss by equalising from close range in the 49th minute.

The outcome was still in doubt until Henderson capped a memorable Anfield night with a thumping effort — only his second in the competition and first for seven years.

“First half an hour we blew them away,” Liverpool left back Andy Robertson said. “Then we got sloppy and stopped doing the things we were doing really well. We let them back into the game and walk in at halftime thinking ‘how have we let this happen?'” 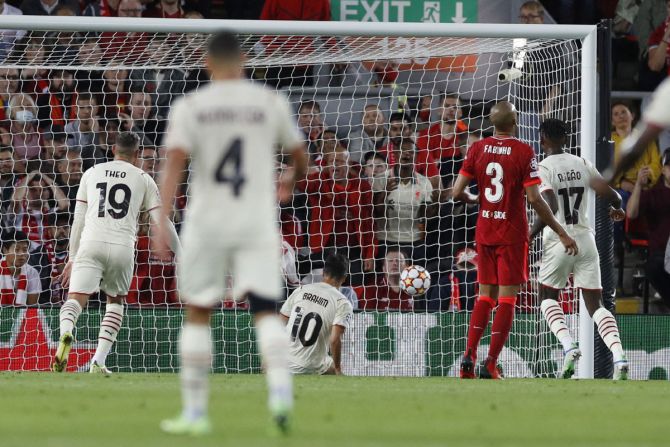 Milan’s return to Europe’s top club competition for the first time in seven years began in torrid fashion as the seven-time champions were initially overwhelmed.

With Zlatan Ibrahimovic unavailable and several players making their Champions League debut, Milan looked ill-equipped to compete and fell behind in the ninth minute when Trent Alexander-Arnold got in on the right side of the area and his cross struck former Chelsea player Tomori and beat Milan keeper Mike Maignan.

Before Milan could clear their heads they conceded a penalty when Ismael Bennacer blocked Robertson’s shot with his arm.

But Maignan dived to his right to keep out Salah’s penalty.

It was only the second time in 19 attempts that Salah had failed to convert a spot kick and it proved a turning point.

Salah fired over and Joel Matip headed straight at Maignan as the chances kept coming but Liverpool were rocked on their heels as Milan turned the game on its head — Liverpool manager Klopp saying later that his team had got a bit “carried away”.

For the first time Liverpool’s high press relented and Milan worked the ball neatly forward before Franck Kessie’s pass played in Rebic to sweep a low shot past Alisson.

Klopp wore a wry smile after that but one minute and 48 seconds later he looked as stunned as everyone else.

Milan attacked down the left again with Kessie and Rebic combining to set up Alexis Saelemaekers whose shot was blocked on the line by Robertson only for Diaz to pounce and convert.

It could have got even worse for Liverpool a minute after the restart when Saelemaekers scored from close range following a corner but an offside flag spared Liverpool.

The frantic pace continued and Liverpool were level in the 48th minute as Divock Origi, given his first action of the season, scooped a ball over Milan’s defence for Salah to dink a bouncing ball past Maignan for his 14th Champions League goal at Anfield, equalling former captain Steven Gerrard’s record.

Milan did well to soak up Liverpool pressure but they finally cracked when a corner was cleared to the edge of the area and Henderson smashed the ball home. Lionel Messi failed to provide Paris St Germain with any sparkle as the Ligue 1 team’s potent attacking trio lacked inspiration in a disappointing 1-1 draw at Club Brugge in their Champions League opener on Wednesday.

Making his first start for the French team, the Argentine forward hit the woodwork but was otherwise far from his brilliant best alongside the hugely disappointing Neymar and Kylian Mbappe, who set up Ander Herrera for PSG’s first-half opener before being replaced injured after the break.

Brugge, who levelled before halftime through Hans Vanaken, were more aggressive and had the best chances against a PSG side lacking quality and defensive focus.

“We didn’t play a fantastic game but to be fair we did enough to win, we deserved to win,” said Herrera.

“Maybe they had opportunities at the beginning of the second half but I think we controlled the match, we had a lot of chances.”

“I didn’t have a lot of work, I just pulled a couple of saves. We played as a compact side, it was the right approach,” the Belgian said.

With Messi, Neymar and Mbappe together on the pitch for the first time, PSG made a confident start but Brugge responded well.

Mbappe broke down the left flank and his low cross was met by Herrera, who opened the scoring in the 15th minute with a low finish for his fourth goal of the season – his third in his last two games.

Messi set up Mbappe, who went close in the 23rd minute with an angled shot that was deflected by Mignolet but PSG were lulled into a false sense of security.

On a sharp attack, the visitors’ defence was overwhelmed on the right side and after a late run into the box, Vanaken connected with Eduard Sobol’s cutback to beat Keylor Navas after 27 minutes.

Messi hit the woodwork with a fine curling shot from the edge of the box before Brugge threatened again as Vanaken forced Navas into a diving save with a low free kick.

The keeper was made to work again to tip Charles De Ketelaere’s rising shot over the bar before halftime.

Danilo replaced Leandro Paredes as PSG’s holding midfielder while Julian Draxler took over from Georginio Wijnaldum as roving midfielder after the break.

PSG suffered a blow six minutes into the second half when Mbappe limped off the pitch after taking a knock on his ankle and was substituted by Mauro Icardi.

Messi had PSG’s first chance of the second half 20 minutes from time with an angled shot before picking up a yellow card, but Brugge did more than enough to claim a well-deserved point. Real Madrid substitute Rodrygo struck an 89th-minute winner to snatch a 1-0 Champions League group-stage victory away to Inter Milan on Wednesday, punishing the wasteful Italians for missing a string of chances.

The Brazilian met a cushioned pass from fellow replacement Eduardo Camavinga and volleyed home in the dying minutes as Carlo Ancelotti’s side triumphed against their major rivals for top spot in Group D.

“It is a very important victory, very difficult, very complicated. A complete performance even though I saw mistakes. The team had a good attitude,” Ancelotti said.

“My team knew we had to suffer and suffer we did — I liked that a lot. This team does not have only quality, it has commitment and that is the most important thing.”

For Inter, it was a painful conclusion to a game they dominated for long stretches but the hosts could not find a way past on-form goalkeeper Thibaut Courtois, who produced several crucial saves.

Real are second in the group behind Moldovans Sheriff Tiraspol, who stunned Shakhtar Donetsk with a 2-0 win on their tournament debut and travel to Madrid next, while Shakhtar and Inter will look to get their first points on the board when they meet in Ukraine.

“Real and Inter are the two favourites for the group but we have taken the advantage with this win. Nobody expected Sheriff to beat Shakhtar. You need to always be careful,” Ancelotti told Amazon Prime.

Inter and Real were already familiar with each other after sharing a group last season, when the Spanish side twice triumphed, but both teams were starting this European campaign under new coaches, Real with Ancelotti and Inter with Simone Inzaghi.

The Italian champions started on the front foot and soon threatened when Edin Dzeko had a shot saved by the legs of Courtois, an early sign of what would prove to be a theme of the night.

Real struggled to cope with the aggression of the hosts and were second best before the break, thanking Courtois again for diving to stop a Lautaro Martinez header and beating away another Dzeko effort.

The Spaniards had soaked up 14 shots by halftime and they kept coming after the break, when Courtois produced the save of the night by clawing a close-range Dzeko header off the line.

Real grew into the game as Dani Carvajal stung Samir Handanovic’s palms with a shot and Vinicius was twice blocked by Milan Skriniar in dangerous positions, and Rodrygo’s late strike gave them the three points.

“We deserved a lot more. But if you don’t score goals it is difficult to win,” Dzeko said.

“We had our chances. Courtois was very good, and us less so, on certain opportunities, but you can’t lose a game like this.”

When and where is your favourite IPL team playing?

Congress will triple its tally in Parliament: Praveen Chakravarty