A round-up of Tuesday’s action in the UEFA Champions League.

Chelsea completed the double over AC Milan to top Champions League Group E with a 2-0 victory at San Siro on Tuesday, a match the hosts had to play the majority of with 10 men.

Looking to build on a 3-0 win over the Italians last week, Chelsea’s task in Milan’s famous old stadium was made all the more navigable after home defender Fikayo Tomori was sent off against his former club when conceding a 17th-minute penalty.

Jorginho converted from the spot after Milan’s protests had calmed down, before striker Pierre-Emerick Aubameyang scored for the third successive match in all competitions to double Chelsea’s lead in the 34th minute.

With the numerical disadvantage, chances were at a premium for Milan in the second half, full-back Sergino Dest wasting the best of them by blazing over from a good position.

Chelsea remained mostly untroubled though, with the victory moving them to seven points from four matches, a point ahead of RB Salzburg and three in front of Milan and Dinamo Zagreb.

Qualification for the knockout stages looked like it may be a tall order for Chelsea after a shock defeat in their group opener at Dinamo Zagreb was followed by a disappointing home draw with Salzburg.

But victory over seven-time European Cup winners and Serie A champions Milan last week brought Chelsea right back into it — setting things up nicely for the return match in Italy. 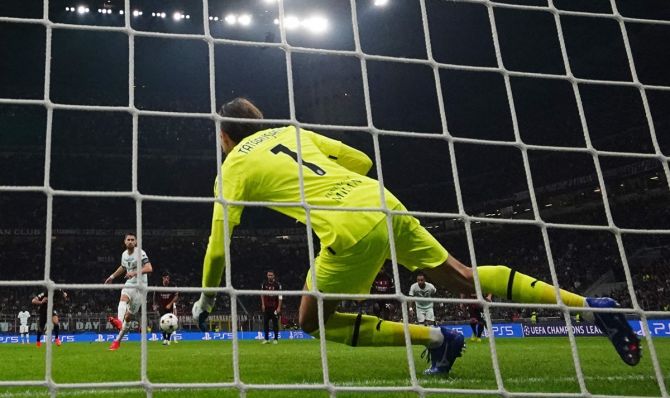 England international Tomori’s foul on Mason Mount, however, effectively ended the match as a contest.

Tomori, who joined Milan from Chelsea in 2021, could not believe the referee showed him a straight red card, but the decision stood after a VAR review, as the 24-year-old became the first English player to get sent off in a Champions League game against an English side.

Jorginho confidently dispatched the spot kick, and the second goal was brimming with quality, with Mount heavily involved, laying the ball through for Aubameyang to continue his fine scoring run having joined Chelsea from Barcelona last month.

Substitute Conor Gallagher should have added a third early in the second, before blazing another opportunity over later in the half, but it mattered little, as Chelsea, in cruise control, saw the match out with ease.

It is now four wins from five in all competitions for new coach Potter since taking over from Thomas Tuchel last month. Manchester City are through to the Champions League last 16 with two group games to spare after drawing 0-0 at FC Copenhagen, despite playing the majority of the match with 10 men.

VAR took centre stage in an action-packed first half in Copenhagen. City thought they had taken the lead 11 minutes in with a goal-of-the-season contender from Rodri, only for the strike to be ruled out for handball in the build-up.

A busy VAR then asked the referee to have another look at a foul by Sergio Gomez on the edge of the penalty area on the half hour mark, with the on-field official choosing to show the City full back a red card for denying a goalscoring opportunity.

The 10 men more than held their own in the second half, but with Liverpool to come in the Premier League at the weekend and qualification for the knockout stage almost secured, City left top goalscorer Erling Haaland on the bench and saw out the draw. 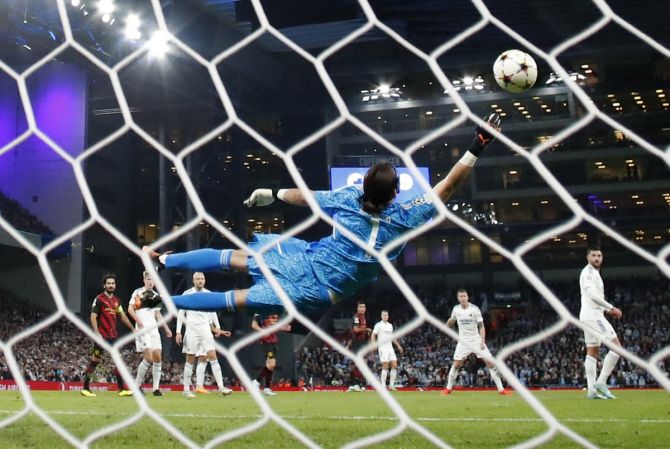 Top of Group G with 10 points from four matches, City are sure of a last-16 spot after Sevilla were held to a 1-1 draw at Borussia Dortmund, meaning Pep Guardiola’s side will finish in the top two, while Copenhagen are bottom on two points.

City players were furious that Mahrez was adjudged to have handled the ball before setting up Rodri for the Spaniard’s thunderbolt.

However, none of them appealed for the penalty that was awarded after the ball struck home defender Nicolai Boilesen on the arm from a City corner, with the referee having checked the pitchside monitor again.

Mahrez never looked comfortable and has now missed two of his last three spot kicks, while City have missed 24 penalties in all competitions under Pep Guardiola, nine more than any other Premier League side since the Spaniard took charge in 2016.

Gomez, who is yet to start a league game for City, then pulled back Hakon Arnar Haraldsson when through on goal. No foul was given initially, but VAR again took over to change the referee’s mind.

With Norwegian goal-scoring phenomenon Haaland on the sidelines, having not started for City for the first time this season in all competitions, the visitors failed to finish off several good second-half chances.

Kevin De Bruyne twice drilled wide from good positions, while Joao Cancelo was denied by a smart save from Grabara.

With Copenhagen happy to take anything from a team who hammered them 5-0 in Manchester last week, the latter stages were played at a slower pace, with City’s job also done. A last-gasp header by Real Madrid defender Antonio Rudiger rescued a 1-1 draw against Shakhtar Donetsk and secured their place in the knockout stage, after the Ukrainian side had taken the lead in the Champions League on Tuesday.

Real hold a four-point lead in Group F over second-placed RB Leipzig, who won 2-0 at Celtic. Shakhtar slipped one place down to third, on five points.

In the last round of games Shakhtar host Leipzig, which means that despite the draw, Real cannot finish lower than second and advance to the last 16 ahead of their next group game at Leipzig on October 25.

Real, who lacked sharpness and their usual killer instinct, had a chance to take an early lead through Karim Benzema in the 18th minute but the Frenchman, who struck from close range, was denied by goalkeeper Anatoliy Trubin.

Trubin, extremely busy between the posts in Warsaw, pulled off another great save to deny a low shot by Benzema in the 36th minute, and denied Rodrygo a minute later by stopping his shot from going inside the left post. 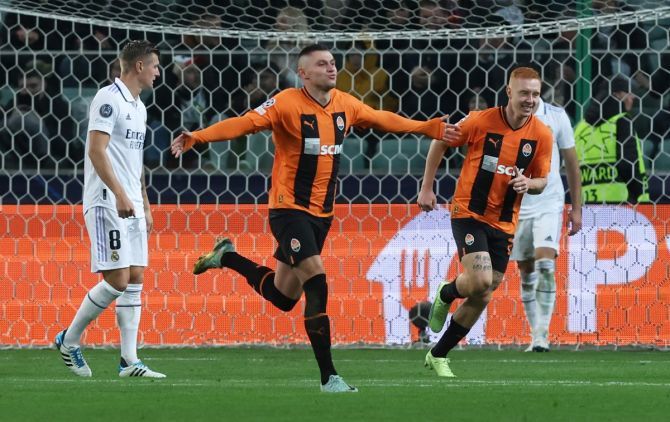 The Shakhtar goalkeeper was alert just before halftime to parry a dangerous long shot by Real midfielder Federico Valverde over the bar.

Trubin’s heroics were rewarded when Shakhtar went ahead one minute into the second half. Bogdan Mykhaylichenko found Oleksandr Zubkov unmarked in Real’s box and the midfielder nodded home into the bottom right corner.

The hosts were inches away from making it 2-0 in the 65th minute through striker Lassina Traore but his shot from inside the six-yard box bounced off the bar.

Three minutes later Zubkov, who was also on target in last week’s 2-1 defeat in Madrid, had another chance but Real’s Ukrainian goalkeeper Andriy Lunin managed to claw the ball away.

Real stepped up their attacks in the final 20 minutes but their shots continued missing the target.

Eventually, Rudiger levelled five minutes into stoppage time by taking advantage of a neat pass from Kroos to deny Shakhtar a famous victory.

The 13-times Ukrainian champions will seek to reach the knockout stage for the first time since 2018.

Real are the only team in the history of the Champions League, with a minimum of two participations, that have never been knocked out in the group phase. 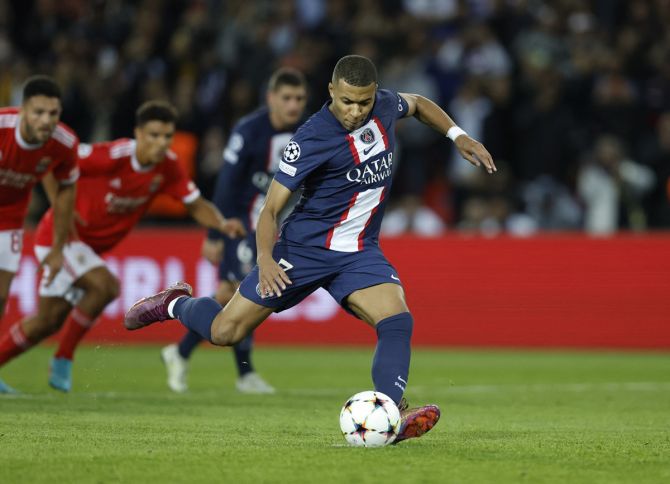 Paris St Germain were held to a 1-1 home draw by Benfica in their Champions League Group H clash on Tuesday, as the French side failed to win for the third game in a row in all competitions.

PSG’s Kylian Mbappe opened the scoring with a first-half penalty before Joao Mario equalised with another spot kick in the 62nd minute to give the visitors a deserved share of the points.

Mbappe found the net with a bicycle kick four minutes from fulltime but his effort was ruled out for an obvious offside.

The result left PSG top of the group on eight points from four games, ahead of Benfica on goals scored.

Juventus are third on three points, ahead of Maccabi Haifa after they were stunned 2-0 by the Israeli team earlier on Tuesday.

At the Parc des Princes, Mbappe appeared unperturbed by Spanish and French media reports claiming he wants to leave the club during the next transfer window due to the way he is being utilised on the pitch.

The France forward combined well with Neymar but they lacked something in attack in the absence of Lionel Messi, who was ruled out of the game with a calf injury he sustained last week in the 1-1 draw at the Estadio da Luz, which was followed by a goalless draw at Stade de Reims at the weekend.

Mbappe was replaced in the last minute as he limped off the pitch with a sore ankle five days before PSG face bitter Ligue 1 rivals Olympique de Marseille.

Benfica made the brighter start, although they failed to create clear chances while it took PSG 34 minutes to get their first short on target through Pablo Sarabia, whose weak attempt was easily blocked by Odysseas Vlachodimos.

Six minutes later, however, the hosts took the lead when Mbappe coolly converted a penalty after Juan Bernat had been fouled in the area by Antonio Silva. The goal meant he became PSG’s top scorer in the Champions League with 31 goals — one more than Edinson Cavani.

Mbappe was at it again six minutes into the second half, but his curled, right-footed effort went just wide.

Benfica then levelled shortly after the hour as Mario converted a spot kick after a bad foul on Rafa Silva by Marco Verratti.

Both teams seemed content with one point each from an underwhelming encounter, which left them on the brink of qualification for the last 16.

PSG next host Maccabi on October 25 when Benfica will take on Juventus. Juventus slumped to a 2-0 defeat against a Maccabi Haifa side who won their first Champions League game for 20 years as Omer Atzili’s double helped the Israelis to a famous victory at a rocking Sammy Ofer Stadium.

The result leaves third-placed Juve’s chances of qualifying for the knockout stages hanging by a thread with the top two teams in Group H — Paris St Germain and Benfica — four points ahead before they play each other later on Tuesday.

Juve had never lost three of their first four matches in the group stage before but the win was well deserved for a buzzing Haifa team that played with a lot of energy — a stark contrast to the Italians who were second best.

Although the loss puts more pressure on Juventus manager Massimiliano Allegri, with his side also struggling in Serie A where they are eighth, the club’s president Andrea Agnelli said the coach’s job was not under threat.

Haifa had the perfect start, taking the lead in the seventh minute when winger Atzili headed home Pierre Cornud’s cross, which left Juve goalkeeper Wojciech Szczesny scrambling on the goal line as he failed to keep the ball out.

Five minutes later Tjaronn Chery’s free kick came off the bar before Szczesny was forced into another diving save from long range as the visitors struggled to impose themselves on a team they beat 3-1 in the reverse fixture.

Juve’s worries were compounded when they lost Angel Di Maria to injury yet again, with the Argentine winger clutching his hamstring before the half-hour mark before his withdrawal.

The home side continued to pile the pressure on and it paid off just before halftime when Atzili doubled the lead with a stinging strike to Szczesny’s near post which the Polish keeper got a hand to but could not keep out.

Juventus had their chances but were denied time and again in the final third while Maccabi’s American keeper Josh Cohen made a couple of fine saves to keep a clean sheet.

Michael Holding: ‘All people of colour who hit out at racism, their careers ended in no time’