Images from the T20 World Cup match between Zimbabwe and the Netherlands, at the Adelaide Oval, on Wednesday.

The Netherlands ended Zimbabwe’s hopes of reaching the semi-finals at the T20 World Cup after a five-wicket victory over the African side in Adelaide on Wednesday.

The Dutch had already produced several highlights in the tournament, but their efforts against Zimbabwe were close to their most complete performance thus far as they cruised to victory at the Adelaide Oval.

In reply, Max O’Dowd (52 off 47 balls) and Tom Cooper (32 off 29) put on 73 for the second wicket as the Netherlands eased to their first victory of the Super 12 stage with two overs remaining.

O’Dowd has been of the most impressive performers of the T20 World Cup thus far. The Netherlands opener has amassed the most runs at the tournament thus far with 213 runs from seven innings. 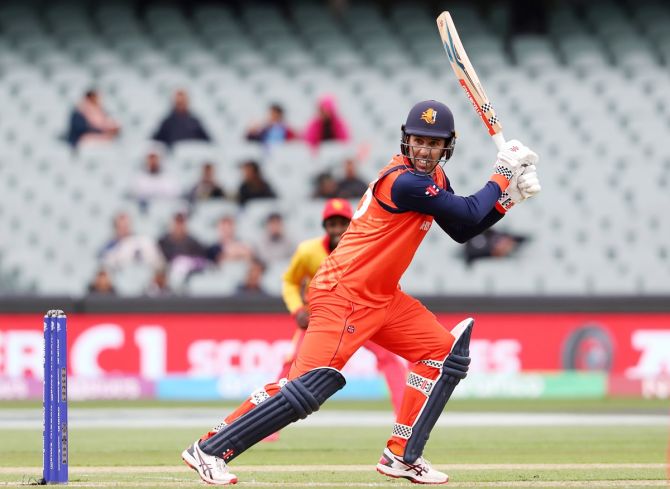 Cooper’s T20 World Cup was in complete contrast leading into Wednesday’s match, the Australia-born veteran having scored just 40 runs from six knocks prior to the clash.

But batting on a ground he would have had plenty of experience playing on with Australian domestic side South Australia, Cooper showed his class with a valuable knock at the top of the order. 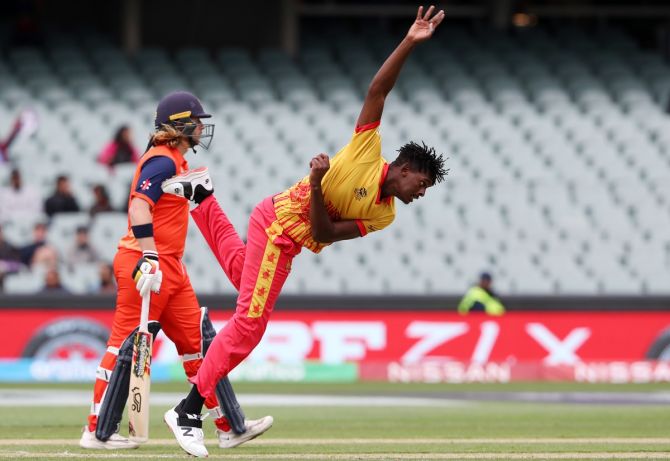 Needing nine runs from 30 balls, the Netherlands went through some anxious moments nearing the finis, losing O’Dowd and skipper Scott Edwards (5) in the space of nine balls. However, Bas de Leede slammed two boundaries in his run-a-ball 12 not out to seal the contest.

The ‘Orange Army’ will take on South Africa in their last match on Sunday.

Zimbabwe, who scored a stunning win over Pakistan earlier in the tournament, next face tournament favourites India in their last match at the Melbourne Cricket Ground on Sunday. Earlier, Sikandar Raza was the only bright spot for Zimbabwe in an otherwise sloppy batting display.

Raza slammed a 24-ball 40 but hardly found support as wickets kept falling around him.

Pacer Brandon Glover (2/29) troubled the Zimbabwe batters early on, extracting swing from the Adelaide Oval as he struck twice inside the Powerplay by dismissing skipper Craig Ervine (3) and Regis Chakbva (5) in successive overs. Paul van Meekeren (3/29) was the top wicket-taker for the Dutch pace attack, which produced a disciplined approach with Logan van Beek (2/17) and Bas de Leede (2/14) also returning with two each as Zimbabwe were all out in 19.2 overs.

That only two batters reached double-digit figures and they consumed 66 dot balls summed up Zimbabwe’s plight in their must-win match.

De Leede took the prized-scalp of Raza who looked to tear the Dutch attack apart as the batter mis-timed a good length ball.

Fred Klaassen, who returned with figures of 1 for 17, took a well-judged running catch at the boundary to end Raza’s entertainment. Electing to bat, the top-three Wessly Madhevere (1), skipper Craig Ervine (3) and Regis Chakabva (5) failed to get going and managed just 20 runs in the first six overs in the Powerplay.

Reeling at 20 for 3, Raza straightaway got going with his swivel shots to counter-attack the Dutch bowlers.

He bisected the field at ease with his elegant drives and looked in total control in a fine 48-run partnership off 35 balls with Sean Williams (28).

Just when Zimbabwe were trying to build a partnership and get back some momentum, Van Meekeren triggered yet another collapse by dismissing Williams.

BJP to be part of alliance that will rule Bodoland council