Images from the World Athletics Championships in Eugene, Oregon, on Friday, Day 8.

Bahamian double Olympic gold medallist Shaunae Miller-Uibo added another jewel to her crown on Friday by winning her first 400 metres title at the World Championships in the fastest time of the year.

The field never had a fighting chance as Miller-Uibo came charging down the back straight and had the lead coming out of the final turn before slowing through the finish.

She crossed the line in a blazing 49.11, nearly half a second clear of Dominican Republic’s Marileidy Paulino, who passed Sada Williams of Barbados to take silver. 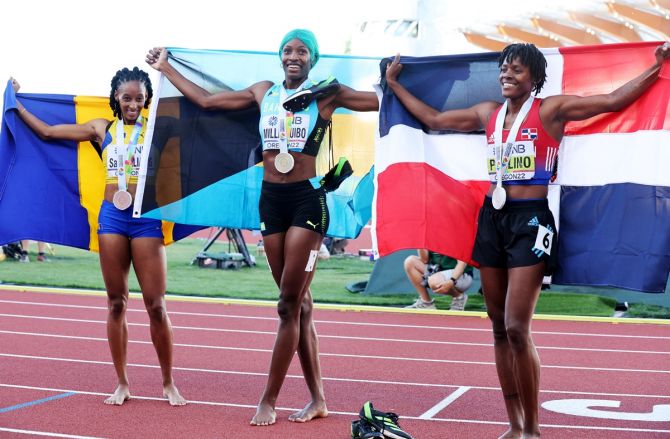 Resting flat on her back on the Hayward Field track, she breathlessly told the crowd in Eugene, Oregon, that the moment was “a blessing”.

“To get this one I’m really happy,” she said.

“It’s a very tough race to run … I’m very happy with the performance.”

She had previously collected silver in Beijing and Doha and 200m bronze in London. The United States have a woeful recent record in the men’s 4×100 metres relay at the World Championships but their quartet got the job done in Friday’s heats despite the added pressure of running on the home track.

The crowd at Hayward Field in Eugene, Oregon cheered after each handover by the Americans, who since winning gold at the 2000 Sydney Games have suffered a series of disqualifications and disappointments at the World Championships and Olympics.

American teams have won only three World titles since 2001 and failed to top the podium at the Olympics since Sydney. 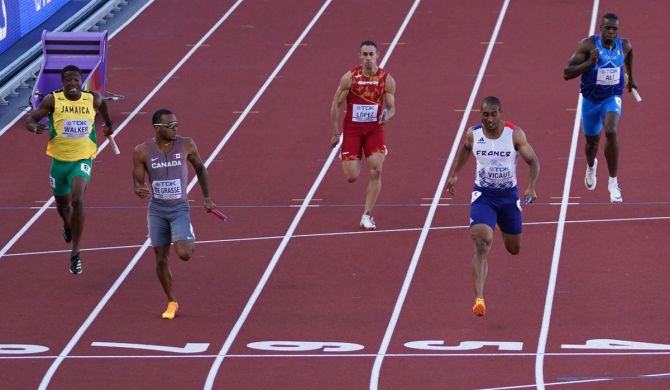 Christian Coleman got the Americans off to a speedy start before handing off to Noah Lyles, who showed little sign of fatigue after winning 200m gold on Thursday.

Elijah Hall’s handoff to Marvin Bracy was far from perfect but the 100m silver medallist powered through to the line to bring the Americans home in 37.87 seconds, ahead of Britain and Ghana.

Nigeria and Japan were disqualified from heat 1 due to violations.

In the other heat, Olympic gold medallist Andre De Grasse helped Canada advance to the final after they finished second to France, with South Africa finishing third.

Olympic champions Italy were without Tokyo gold medallist Marcell Jacobs due to injury and will miss Saturday’s final after finishing seventh in their heat.

US, Jamaica set up another women’s sprint relay showdown The United States landed the first blow in the “phoney war” of the women’s 4x100m relay on Friday as their shadow squad qualified fastest for the final, with perennial rivals Jamaica solid enough but with so much more to come.

The US squad of Melissa Jefferson, Aleia Hobbs, Jenna Prandini and Twanisha Terry were spot-on with their changeovers to come home well clear in the second of two heats.

The Americans clocked 41.56 seconds and have some quicker individuals to bring in for Saturday’s final. 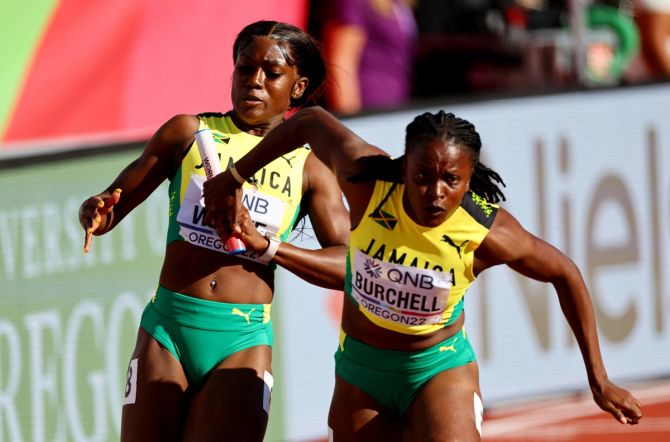 The Jamaican shadow squad did what was needed, getting the baton safely round to finish second behind Britain in 42.37s in the first heat.

Jamaica’s “big three” – Shericka Jackson, Shelly-Ann Fraser-Pryce and Elaine Thompson-Herah – who swept the 100m podium and raced the 200m final on Thursday, were all rested.

Jamaica and the United States have each won four of the last eight world titles and between them took eight of the last 10 Olympic golds.

They will need to avoid any changeover fumbles to continue that run though as Britain, regulars on the podium in global competitions over the last decade, also looked good.

Daryll Neita ran an impressive anchor after a succession of sharp changeovers as they posted 41.99 seconds and they have Dina Asher-Smith to come into the team.

Spain and Italy both clocked national records to advance, along with Germany, Nigeria and Switzerland. 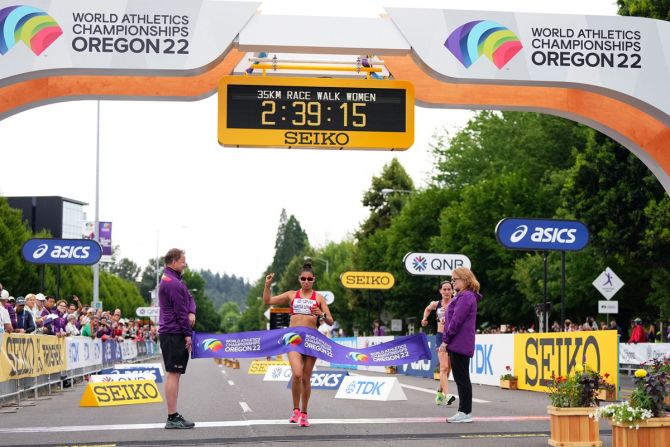 Peru’s Kimberly Garcia won the first ever 35km race walk to be held at the World Athletics Championships, a week after securing gold in the women’s 20km event.

As in the earlier race, she was followed home by Poland’s Katarzyna Zdzieblo and China’s Qieyang Shijie.

In earning both race walking golds at a global championships, the 28-year-old from Huancayo emulated the great Polish race walker Robert Korzeniowski, who won the men’s 20km and 50km events at the Sydney 2000 Olympics.

As in the 20km race walk, Garcia went early to the lead and remained there, although she was accompanied for half the race by the Pole.

She crossed the line in a South American record of 2:39:16 seconds, four minutes inside her previous best and enough for equal third on the world all-time list, with Zdzieblo taking silver 2:40:03s and Qieyang, who was virtually alone for the whole race, earning bronze in an Asian record of 2:40:37s.

Tokyo Olympics | Athletes give thumbs up to postponement

'RHOA' Reunion Recap: NeNe Barks at Andy Over Closet Question, Porsha Goes Off on NeNe for Being So 'Nonchalant'