Images from the World Athletics Championships in Eugene, Oregon, on Wednesday, Day 6.

Norah Jeruto delivered a devastating display of front running to win the world 3,000 metres steeplechase title in a massive championship record on Wednesday, earning gold for Kazakhstan having switched allegiance from Kenya earlier this year.

Werkuha Getachew set an Ethiopian record of 8:54.61 for silver, ahead of compatriot Mekides Abebe, who worked really hard to rejoin the lead group and was rewarded with a personal best of 8:56.08.

Bahrain’s Winfred Mutile Yavi, fastest in the world this year, was right in the mix for a medal but had a terrible water jump on the final lap and lost all momentum to finish fourth for the second successive World Championships. China’s Feng Bin put up the performance of her life to stun the women’s discus final at the World Championships on Wednesday, as Olympic champion American Valerie Allman settled for bronze.

Feng won off of her 69.12-metres opener, a personal best and her strongest performance of the season by a wide margin, as Croatia’s Sandra Perkovic secured the silver in a 68.45-metres second attempt.

With the home crowd urging her on, Allman rocketed the discus across the field on her third throw and she jumped with excitement but it was marked far short of Feng’s effort, and she fumbled her final try for 51.41.

Reigning champion Yaime Perez of Cuba could not find her power, finishing seventh with a best throw of 63.07.

Miller-Uibo shaping up well in mission to claim 400m title Double Olympic champion Shaunae Miller-Uibo sent out an ominous reminder that she is in prime form to finally claim the world 400 metres title after cruising to victory in her semi-final in the year’s second-fastest time on Wednesday.

The Bahamian 2019 and 2015 silver medallist sported a long, flowing bright blue wig as she posted 49.55 seconds in the first of three semis and was virtually jogging the last 50 metres.

She will face a stiff twin challenge from the Dominican Republic in the shape of Marileidy Paulino, who took Olympic silver behind her in Tokyo, and Fiordaliza Cofil, who was a team mate of Paulino in their mixed 4x400m relay-winning team on the first day of the Eugene Championships.

Both advanced as heat winners but they looked to be working hard on a warm night.

“I am taking everything step by step. I was just trying to get through as smooth as I could and I think I did a pretty good job,” said Miller-Uibo.

“I anticipate it to be a very competitive and very quick race in the final so I am looking forward to it – all the girls are pretty equal,” she said.

Jamaica’s Charokee Young, second-fastest in the world this year trailed in a distant fifth in her heat to miss out on Friday’s final, as did America’s main hope Talitha Diggs. American Champion Allison produced a remarkable comeback to advance to the 400 metres final at the World Championships, as compatriot Michael Norman stormed to the fastest finish.

But it was Allison, the second-fastest this year behind Norman, who recovered from about a metre back to sneak across the finish first, with van Niekerk, the Rio Olympic champion, holding on for the second automatic qualification spot.

Trailing Matthew Hudson-Smith off the final turn, Norman accelerated down the final straight, inching past the Briton to win in 44.30 seconds, as Jamaican Christopher Taylor produced a speedy finish to advance as a fast loser.

Kirani James of Grenada pulled away from a tight pack down the final straight to win his heat in 44.74, with American Michael Cherry, who finished just off the podium in Tokyo, losing his strength in the final metres and failing to advance. 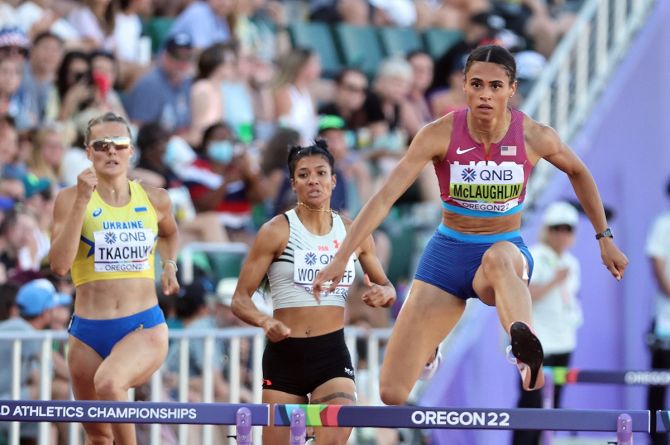 Record-holder Sydney McLaughlin is set for a showdown with rival and fellow American Dalilah Muhammad, after she clobbered her 400 metres hurdles semi-final in Wednesday’s fastest time.

The 22-year-old showed she was spoiling for a fight at Hayward Field on Wednesday, claiming the lead before she had cleared the final turn, slowing through the final straight with plenty left in the tank to win in 52.17 seconds, more than one-and-a-half seconds ahead of Gianna Woodruff of Panama.

Muhmmad got off the blocks slower than many of her competitors but was a couple metres clear of the field by the ninth hurdle, gliding through the finish easily to win her respective heat in 53.28.

The Netherlands’ Femke Bol, the Tokyo bronze medallist who produced an extraordinary effort to help collect silver in the 4×400 metres mixed relay on Friday, won her race in 52.84. Olympic champion Emmanuel Korir of Kenya looks a stronger favourite for the men’s 800 metres gold after advancing safely into the semi-finals, as did his in-form compatriot Wyclife Kinyamal and Canadian Marco Arop, who had the fastest time of the day.

“The race was not perfect because of the heat, I did not want to struggle too much,” said Korir, who barely broke a sweat in winning a pedestrian opening heat.

“After the Olympics, it was not easy. It takes time, training, lot of stuff going on there but at least I am here and that is what matters.”

American defending champion Donavan Brazier, troubled by a foot injury in recent weeks and awaiting surgery, was way off the pace in his heat and failed to progress.

Britain’s Max Burgin, the fastest man in the world this year and a real medal hope for the men’s 800 metres, withdrew from the first round heats shortly before they got underway on Wednesday because of an injury, UK Athletics said in a statement.

Burgin, 20, posted his world lead of one minute 43.52 in Finland last month and as a noted front-runner had been hoping to complete a middle distance double for Britain after Jake Wightman won the 1,500 metres on Tuesday.

The semi-finals are on Thursday with the final one of the highlights of a packed Saturday night session.