Images from Day 1 of the first Test between England and New Zealand at Lord’s on Thursday, June 2, 2022.

England started the new era under captain Ben Stokes and head coach Brendon McCullum superbly after their fast bowlers reduced New Zealand to 39-6 at lunch on the first day of the opening Test at Lord’s on Thursday.

Seamers James Anderson and Stuart Broad, first and second on England’s all-time list of Test wicket takers, were omitted from the tour of West Indies where the team lost 1-0, but were recalled to the squad for the first Test of the English summer.

Sent in to bowl first, 39-year-old Anderson handed the hosts the perfect start by dismissing New Zealand opener Will Young for one run, with Jonny Bairstow diving low to his left for a superb one-handed catch in the slips. 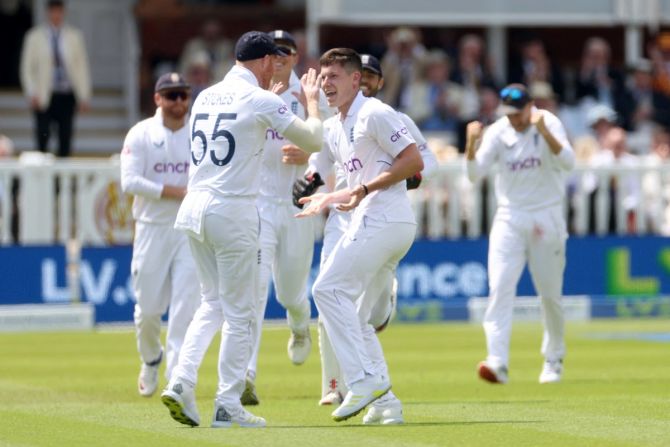 Anderson took out Tom Latham shortly after the batsman played a back-foot drive outside off and sliced an edge, which flew to Bairstow, who pulled off a juggling catch at third slip.

Broad then joined the party, dismissing Devon Conway for three after Bairstow took his third catch within 40 minutes of play, this time with ease.

Matthew Potts, making his test debut, had a memorable day as the 23-year-old sent visiting skipper Kane Williamson back to the pavilion on his fifth ball. 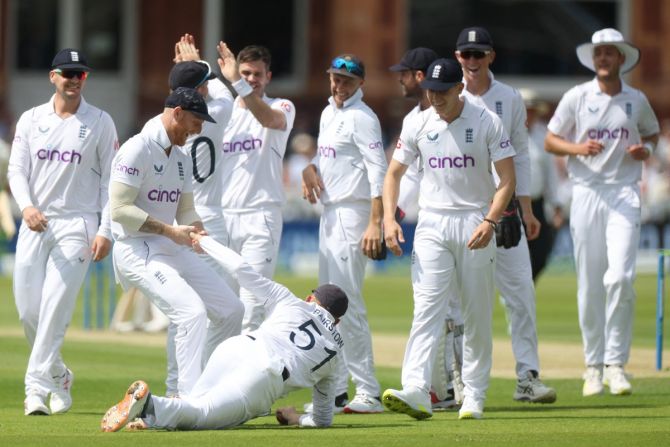 Williamson, whose team won the inaugural Test championship final against India last year, nicked the ball through to wicketkeeper Ben Foakes and was out for two runs as New Zealand limped to 12-4 after 10 overs.

Potts picked up another wicket in the 18th over, removing Daryl Mitchell for 13 runs as the Durham paceman banged the ball in and Mitchell played it onto his stumps.

The debutant grabbed his third wicket by dismissing Tom Blundell for 14 after the Durham paceman fired the ball down towards the top of off stump and Blundell ended up offering no shot after being caught in two minds.

Colin de Grandhomme (3 not out) and Kyle Jamieson (0 not out) were at the crease as the teams ended the first session.

The England cricket board said that Lancashire spinner Matthew Parkinson would be Jack Leach’s concussion replacement after Leach injured his head while stopping a boundary by Conway in the sixth over.

Shivam Dube has turned heads with his striking ability

The Suicide Squad review: Politics of this DC film packs a punch

Mike Bloomberg would sell business interests if elected US president