Images from Wednesday’s IPL match between Delhi Capitals and Rajasthan Royals, in Dubai.

Shikhar Dhawan and skipper Shreyas Iyer hit stroke-filled half-centuries but Delhi Capitals lost momentum towards the end and were restricted to 161 for 7 against Rajasthan Royals in the Indian Premier League match, in Dubai, on Wednesday.

The last five overs of the Delhi Capitals innings yielded only 32 runs and cost them four wickets, an indication how they missed Rishabh Pant and Shimron Hetmyer. 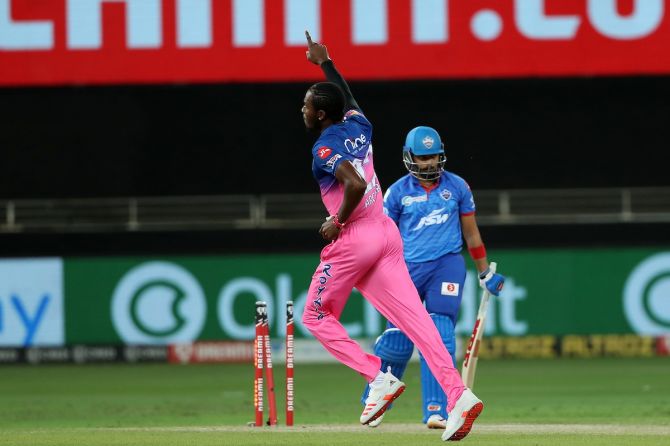 Opting to bat first, Delhi’s innings had a disastrous start. Prithvi Shaw was out to the first ball of the match by a gem of a delivery from Jofra Archer (3/19). The ball jagged back in after pitching and crashed into the middle stump after getting an inside edge.

To make matters worse for Delhi, Ajinkya Rahane holed out to Robin Uthappa off Archer at mid-on an over later.

However, skipper Iyer (53 off 43) joined hands with Dhawan (57 off 33) and the duo, after initially playing cautiously, opened up to take Delhi forward. They shared 85 runs for the third wicket off 55 balls to keep the momentum going after the early jolts.

Dhawan looked in great nick from the outset, often finding the boundary with his trademark pulls and shots square off the off-side.

In the process, he scored his 39th fifty in the IPL off just 30 balls, but soon after attaining the feat he departed while trying to force the pace, caught at short third man by Kartik Tyagi off leg-spinner Shreyas Gopal. His runs, which had six boundaries and two hits over the fence, came off  33 balls.

After Dhawan’s dismissal, Iyer took up the onus on himself and upped the ante with some lusty hits. He got to his fifty off 40 balls in the 15th over, bowled by Jaydev Unadkat, that yielded 17 runs, including two sixes.

But soon after, Iyer departed, caught by Archer at long-off off Kartik Tyagi as he went for another big hit.

Marcus Stoinis (18) and Alex Carey (14) tried their best to add muscle to the scoreboard but were unsuccessful.

Priyanka unlikely to move base, to stay in Lucknow

I am ‘yesterday’s man’ looking for next champion, says Abhinav Bindra

Why stylists have the most EXCITING job

Divya Agarwal’s father passes away
We and our partners use cookies on this site to improve our service, perform analytics, personalize advertising, measure advertising performance, and remember website preferences.Ok