A terrible error from goalkeeper Tim Krul gifted Pierre-Emerick Aubameyang his 50th Premier League goal as Arsenal thumped Norwich City 4-0 at the Emirates on Wednesday, pushing the Canaries ever closer to relegation.

Krul foolishly attempted to fake a long kick and dribble past the Gabon striker in the 33rd minute, but he nicked the ball off the keeper’s foot and rolled it into the net to reach a half-century of goals in the English top flight.

The Gunners scored a brilliant second four minutes later as David Luiz started an attack with a superb cross-field ball to Kieran Tierney. His pass found Aubameyang, who teed up Granit Xhaka to score with a sweet first-time shot.

Norwich manager Daniel Farke made three changes at the break and his side started the second half brightly, with replacement striker Adam Idah forcing a save in the first minute of the second period.

However, Norwich’s penchant for mistakes came back to haunt them, and Aubameyang killed the game off with his second goal in the 67th minute after the visitors lost the ball from their own throw-in.

Cedric Soares came off the bench to score his first goal for Arsenal in the 81st minute as the London club climbed to seventh place on 47 points. Norwich remained bottom on 21 points, six behind 17th-placed West Ham United with six games left.

Aubameyang said he was proud of his goal-scoring record at Arsenal, adding that discussions with the club about signing a new contract were ongoing.

“We’ll talk with the club and we’re going to see what’s going to happen, but first of all I’m really focused on the games and the end of the season, so we’ll see,” the 31-year-old told BT Sport. 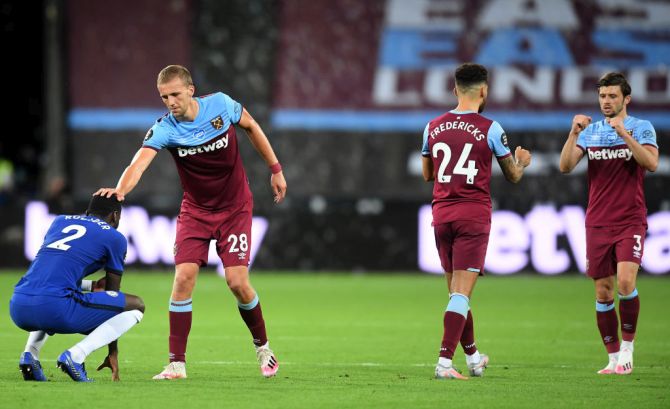 Lampard’s side dominated for long periods but were stunned late on when Andriy Yarmolenko slotted home an 89th-minute winner following a counter-attack by the home side.

Chelsea could have moved into third spot and taken a huge step towards ensuring a Champions League berth with a victory but instead are fourth and are only two points above in-form Manchester United and Wolverhampton Wanderers.

“It happens, it is the Premier League … we dominated the game in terms of possession, but make mistakes and teams will hurt you,” Lampard said. “I’m not happy with any of the goals.

“There were details in the game which we knew, but we lost because we didn’t get them right.”

After beating Manchester City last week and then winning at Leicester City at the weekend to reach the FA Cup semi-finals, Chelsea were in a buoyant mood ahead of the derby.

But their fine run since the resumption of the season came to a shuddering halt as they suffered a second league defeat of the season against lowly West Ham.

Willian gave them the lead from the penalty spot but goals by Tomas Soucek and Michail Antonio either side of the break put West Ham ahead, before Willian’s sweet free kick levelled it up.

Chelsea were pushing for a winner when they were caught out by substitute Yarmolenko.

“It is why we are fighting for top four not one or two, because we don’t get things right as much as the big boys do,” Lampard said.

“I am not happy with tonight but at the same time we are two points ahead of Manchester United, who have been going great for some time.

“I think at times we have played really well this season. As a group we need to find more consistency.”

Leicester suffered another defeat on Wednesday, losing 2-1 to Everton, and while they once looked certain of returning to the Champions League, they are now winless in four matches.

Leicester has only won two of its 11 league games since January 1, with five losses.