‘I have never really believed 100 percent that I can actually win a Grand Slam.’

Iga Swiatek said she felt lucky when she won her first French Open title in 2020, but the world number one credits hard work for her second Grand Slam title on the Parisian clay.

Swiatek, who beat American teenager Coco Gauff 6-1, 6-3 in Saturday’s final at Roland Garros, went from being a largely unknown 19-year-old, ranked 54th in the world, to instant celebrity status after lifting her first Suzanne Lenglen Cup 18 months ago.

But she arrived in Paris last month as the overwhelming favourite, having won all five tournaments she had played before the claycourt major.

“I think in 2020 the main thing that I felt was confusion, because I have never really believed 100 percent that I can actually win a Grand Slam,” the Pole, who turned 21 last week, told reporters.

“This time it was, pure work. Just with everything that was going on, I’m also like more aware of how it is to win a Grand Slam and what it takes and how every puzzle has to come together and basically every aspect of the game has to work.

“With that awareness, I was even more happy and even more proud of myself, because in 2020 … I just felt that I’m lucky. This time I felt like I really did the work.”

Swiatek struggled to handle her new-found fame after becoming a first-time major winner but said she felt more prepared this time for what would follow and “even ready to celebrate a little bit more”.

The setting was also different from the 2020 final for Swiatek, with that tournament in Paris played with a limited number of spectators in the stands due to the coronavirus pandemic. 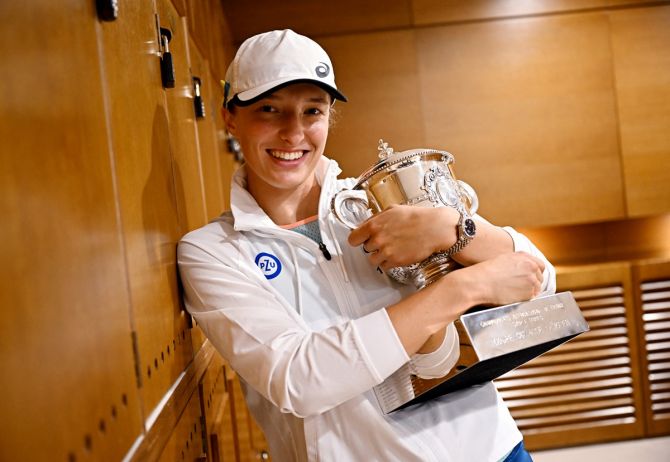 On Saturday, the 15,000-capacity centre court was full and among those cheering for Swiatek was Poland’s football captain and striker Robert Lewandowski.

Swiatek did not drop a set during her 2020 triumph and lost just one during this year’s Roland Garros campaign, extending her winning run to 35 matches.

That took her past Serena Williams’ winning streak of 34 matches while she equalled Venus Williams with Saturday’s win over Gauff on Court Philippe Chatrier.

“It may seem pretty weird, but having that 35th win and kind of doing something more than Serena did, it’s something special,” Swiatek added.

“Because I always wanted … to have some kind of a record. In tennis it’s pretty hard after Serena’s career. So basically that really hit me.

“Obviously winning a Grand Slam too, but this one was pretty special because I felt like I’ve done something that nobody has ever done, and maybe it’s gonna be even more. Yeah, this one was special.”

Swiatek has now won both her majors on clay and having already proved earlier in the season that she has the game to dominate on hardcourts, she will turn her attention to grass — a surface on which she has not had much success — with Wimbledon starting from June 27.

“My coach (Tomasz Wiktorowski) believes I can win more matches on grass. I don’t know about that yet,” she said with a smile. “But I would like to add like one or two. Yeah, but honestly, grass is always tricky.

“I actually like the part that I have no expectations there. It’s something kind of refreshing.

“I’m going to just prepare my best. And maybe with the experiences he had with (Poland’s former world number two) Aga Radwanska, it was her favourite surface, he’s going to give me some tips that are actually going to be really helpful, and I’m going to enjoy playing on grass a little bit more.”

Explained: What is Daylight Saving Time?

Watch | Milkmen in Belagavi disposing 1,500 litres of milk due to COVID-19 lockdown