Neymar did not accept the decision and it took strike partner Kylian Mbappe to usher the angry Brazil star away from the referee and off the field. PSG move 13 points clear at the top of the French league. 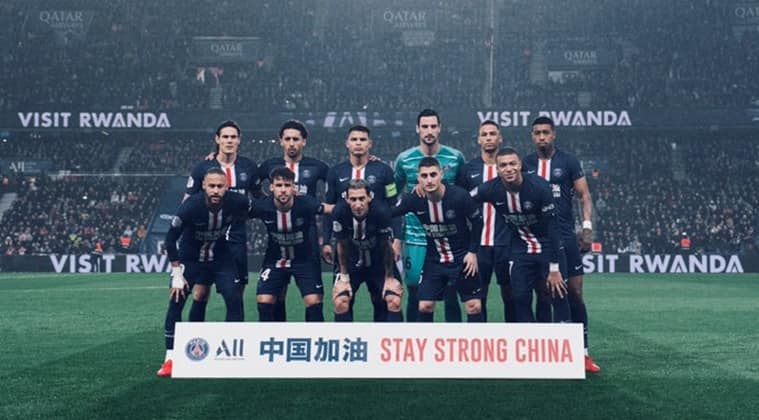 Neymar was sent off as Paris Saint-Germain overcame more sloppy defending to beat Bordeaux 4-3 on Sunday and move 13 points clear at the top of the French league.

Neymar made a crude and needless two-footed lunge on midfielder Yacine Adli during injury time and was shown a second yellow card.

Even though he sent Adli flying, Neymar did not accept the decision and it took strike partner Kylian Mbappe to usher the angry Brazil star away from the referee and off the field.

Mbappe was locked in animated discussion with two-goal scorer Marquinhos at the final whistle on a night when Edinson Cavani scored a club record-extending 200th goal for PSG.

“It’s not a reassuring win. We know we can do much better,” Marquinhos said. “It was an intense week where there were many talking points.”

PSG has conceded nine goals in three games and taken heavy criticism off the field in the past few days.

PSG lost 2-1 at Borussia Dortmund in the first leg of their Champions League last-16 game on Tuesday. Two days later, the players were scolded by coach Thomas Tuchel after a video of them dancing and wildly celebrating at a players’ birthday party circulated on social media.

Yet strangely it was Tuchel – and not the players – who was whistled when the teams took to the field at Parc des Princes.

Tuchel dropped former Real Madrid standout goalkeeper Keylor Navas, who was replaced by Sergio Rico. But center half Presnel Kimpembe kept his place, despite his brother aiming an expletive-laced insult at Tuchel on his social network account following the Dortmund loss.

Center half Thiago Silva, so poor against Dortmund and also in the 4-4 draw at Amiens the game before, limped off with what appeared a leg muscle injury. But in amateurish scenes, he then came back onto the field because substitute Idrissa Gueye was not ready. Gueye took three minutes to prepare and, when he came on, Bordeaux scored immediately as South Korea forward Hwang Ui-jo headed in from a corner in the 18th.

Seven minutes later, Angel Di Maria whipped in a good cross from the left and Cavani headed powerfully home for his 200th goal in 298 games since joining from Napoli in 2013.

Di Maria was involved again, three minutes into first-half injury time, when his free kick went in off the shoulder of center back Marquinhos.

But one minute later, a comical defensive error from PSG sent the teams in level at 2-2.

Marco Verratti sent a routine back-pass to Rico, but his botched clearance hit the knee of Bordeaux’s Brazilian defender Pablo and went in. The nervous Rico then made another hash of a clearance early in the second half, and PSG was lucky to see Samuel Kalu fluff a clear chance.

“We’re strong up front but we’re conceding a lot of goals,” Marquinhos said in a familiar refrain from previous seasons. “We need to play better as a team.”

In a match full of bad defending, Bordeaux failed to deal with a corner and Marquinhos prodded home the loose ball after Cavani’s header was saved by goalkeeper Benoit Costil.

Bordeaux was in charitable mode, when it should instead have been exploiting PSG’s weaknesses. Bordeaux lost the ball near the penalty area instead of clearing it, and Cavani played in Mbappe to score in the 69th.

Cavani missed a good chance before midfielder Ruben Pardo drilled a fierce shot into the left corner from 20 meters in the 83rd.

PSG striker Mauro Icardi had a late goal chalked off following a video review, with Mbappe given offside when the cross came in.

Then Neymar saw red, and he faces a suspension when PSG needs him to get in top shape for the return leg against Dortmund on March 11.

Leipzig move into third spot with 4-2 win at Cologne

SEE: Warner sweats it out in hotel; Smith relaxes