India’s batting stars Virat Kohli and Suryakumar Yadav were named in the Most Valuable Team of ICC T20 World Cup 2022.

Stars from champions England, runners-up Pakistan, semi-finalists India and New Zealand as well as Zimbabwe and South Africa all feature in the glittering line up.

Captain, wicketkeeper and opening batter Jos Buttler, fellow opener Alex Hales and seamer Sam Curran all make the cut for England after helping steer their side to a second T20 World Cup title.

Hales was featuring in his first ICC Men’s T20 World Cup since 2016 but rediscovered his fluency on the big stage with an impressive set of performances.

The power-packed opener racked up a haul of 212 runs at a healthy average of 42.40 to help propel his team to victory in Sunday’s final in Melbourne.

Hales struck a brilliant 86 not out to fire England to a memorable 10-wicket victory against India in the semi-finals, with Buttler also hitting a similarly eye-catching 80 not out as his side chased down an imposing target of 169 with ease.

And further innings of 52 and 47 against New Zealand and Sri Lanka in crucial Super 12s matches proved equally significant to help England on their way to becoming the first country to hold both the ODI World Cup and T20 World Cup titles at the same time. 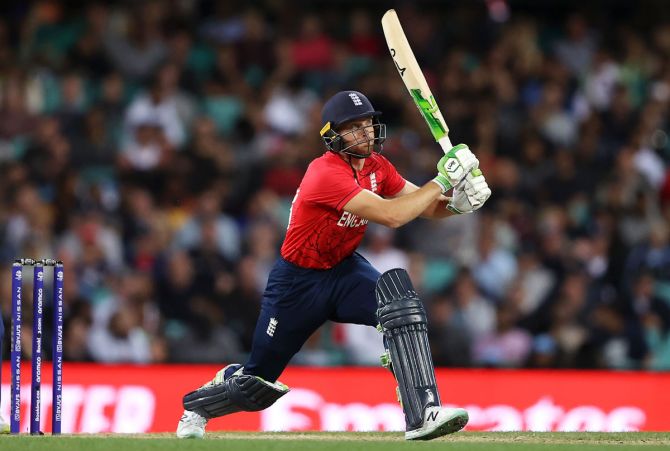 England skipper Buttler was in similarly blistering form throughout the competition, scoring 13 runs more than his opening partner at an average of 45.00.

He led from the front with that fine innings against India in the last four, while a further knock of 73 off 47 balls against New Zealand helped cap a potent opening partnership that consistently laid the foundations for the eventual champions. 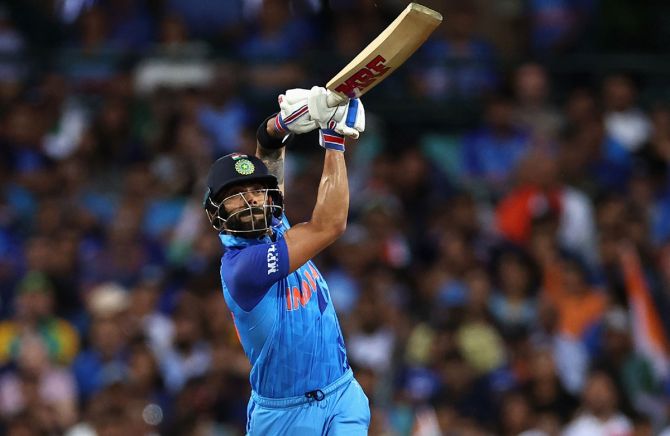 Batting at No.3 is Indian superstar Kohli, who ended as the tournament’s highest run-scorer after scoring 296 runs at a stunning average of 98.66.

Kohli kickstarted his campaign with a pivotal 82 not out against rivals Pakistan to anchor his side to a heart-thumping final-ball four-wicket victory.

And further knocks of 64 not out against Bangladesh, 62 not out against the Netherlands and 50 against England in the semi-finals helped round off an individual competition to savour for one of the greatest white-ball batters of the modern era. 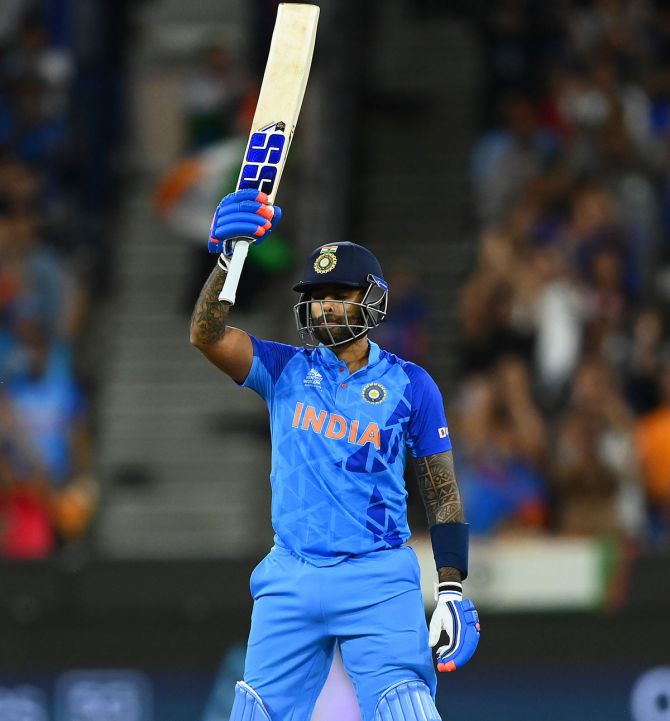 Fellow Indian Yadav slots in at No.4 after finishing as the tournament’s third-most prolific batter with 239 runs overall.

Three half centuries against the Netherlands – 51 not out in Sydney – South Africa – 68 in Perth – and Zimbabwe – 61 not out off just 25 balls in Melbourne – helped haul his side into the semi-finals as he scored at a staggering strike rate of 189.68 throughout his six innings. New Zealand star Phillips and Zimbabwe ace Raza occupy the No.5 and 6 positions, with Phillips’ stunning century – one of just two in the tournament alongside South Africa’s Rillee Rossouw – against Sri Lanka catapulting his team to a comfortable 65-run victory in Sydney.

Another innings of 62 against England helped him reach a total of 201 runs at an average of 40.20 Raza, with 219 runs and 10 wickets, proved pivotal assets for Zimbabwe with both bat and ball.

He scored a polished 82 off his 48 balls in his country’s opening game against Ireland in Hobart, before further batting contributions against Scotland, Netherland and India – bolstered by a brilliant three for 25 as Zimbabwe stunned Pakistan in Perth – rounded off a tournament to remember. Completing the middle order is Pakistan all-rounder Shadab, who grabbed an impressive 11 wickets at an average of just 15.00.

The skilful leg-spinner bagged three-wicket hauls against Zimbabwe and the Netherlands, while a further four combined wickets against South Africa and Bangladesh saw him emerge as one of the tournament’s most influential slow bowlers.

And he was similarly impressive with the bat, striking a solid 92 runs at an average of 24.50 to help fire his side to the final in Melbourne. 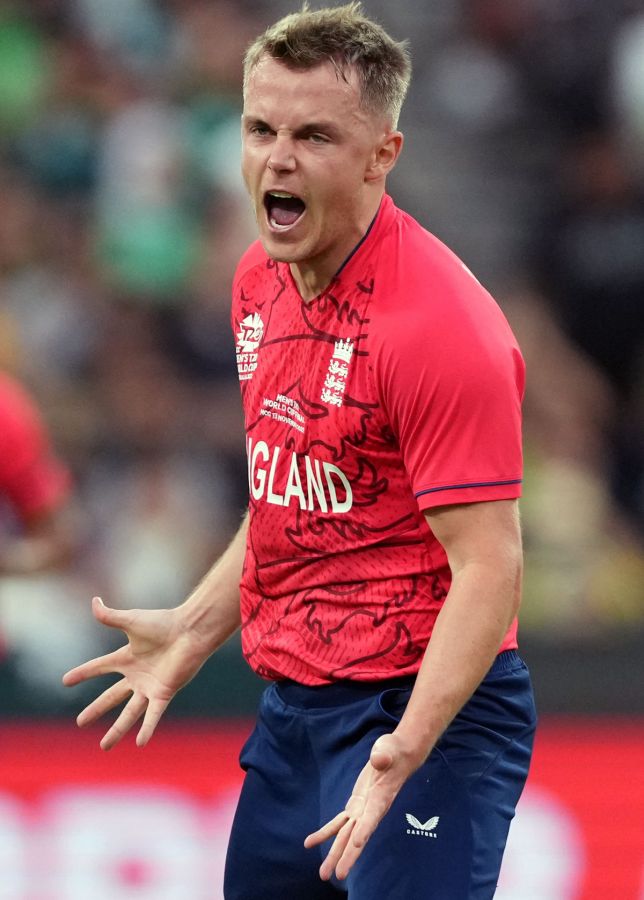 England ace Curran was crowned Player of the Tournament after a series of spellbinding bowling displays.

The left-arm seamer claimed remarkable figures of 3 for 12 off his four overs in the final after getting his tournament underway with a similarly scintillating five for 10 against Afghanistan.

And further two-wicket displays against Ireland and New Zealand helped him grab a haul of 13 wickets at an average of 11.38 as England claimed the title in style. Another bowler who starred was pace ace Nortje, who functioned as a vital weapon in South Africa’s armoury after finishing with a tournament-best average of just 8.54.

Nortje conceded just 94 runs while in the process of taking his 11 wickets as four scalps against both Bangladesh and Pakistan helped him become one of the competition’s most fearsome bowlers. Despite being ruled out of the semi-finals and final through injury, Wood’s consistency throughout the Super 12s – spearheaded by three wickets against Afghanistan and Ireland – saw him finish the tournament with an average of just 12.00. Afridi, who also suffered an unfortunate injury in Sunday’s final, his figures of four for 22 against Bangladesh and three for 14 against South Africa helped him emulate his new-ball heroics in last year’s tournament as Pakistan were narrowly denied in Melbourne. Taking his place as 12th man is Indian all-rounder Pandya, who starred with both bat and ball by racking up 128 runs and eight wickets.

The dangerous middle-order ace blasted 63 against England in the semi-finals after also taking key wickets against Pakistan, Bangladesh and Zimbabwe throughout the Super 12s.

Sir Cecil poised for a double