In both a personal Facebook post announcing his departure and in an interview later in the day with the tabloid newspaper Bild Zeitung, Jürgen Klinsmann implied that he did not feel he had enough support from the club’s leadership to continue in his post. Jürgen Klinsmann, the former U.S. men’s national soccer team coach, resigned as manager of the Bundesliga club Hertha Berlin on Tuesday, abruptly abandoning his project to transform the German club into a powerhouse after only 76 days in charge.

Klinsmann, 55, was hired in November, his first job since he was fired as the U.S. coach in 2017 amid an ultimately failed bid to qualify for the World Cup. In returning to club coaching, he all but promised to turn Hertha Berlin into a European power within years.

But 10 weeks later, and with only three wins in his 10 games, he shocked both Hertha’s fans and the club by resigning, months before the end of the season. Hertha Berlin lost, 3-1, to lowly Mainz on Saturday, and the prospect of the club’s facing a humiliating — and potentially financially ruinous — relegation out of the Bundesliga, Germany’s top division, is now a distinct possibility.

In both a personal Facebook post announcing his departure and in an interview later in the day with the tabloid newspaper Bild Zeitung, Klinsmann implied that he did not feel he had enough support from the club’s leadership to continue in his post.

“There were simply different ways of thinking and, above all, different cultures,” Klinsmann told Bild. In particular, he lamented not having more control over player transfers.

“Too much energy is spent on things that happen off the field,” he said in the interview.

Hertha was 3-3-3 in league play under Klinsmann, leaving it marginally higher on the league table but still in danger of demotion to a lower league. Hertha currently sits in 14th place in the 18-team division, but it is only six points — two wins — out of the relegation zone.

The team’s recent results are far from the turnaround Klinsmann had predicted when he took charge. Hertha spent a record $83 million on four new young players in the short winter transfer window, and Klinsmann’s reputation as a former star striker for Germany and a host of top clubs, not to mention his unwavering optimism, produced plenty of positive headlines for a club not used to being noticed.

In an interview with The New York Times in January, he laid out a timeline that would have quickly returned Hertha to the top half of the standings and into European competitions.

A couple of hours after Klinsmann resigned, the club confirmed that one of his assistants, Alexander Nouri, would take over in the short term. It was clear Klinsmann’s resignation had come as a surprise to the club, its fans and its investors.

“I deeply regret the decision made by Jürgen Klinsmann,” Lars Windhorst, a German businessman who made a major investment in the team last summer, wrote to The Times. Windhorst was credited with helping to bring Klinsmann aboard and supplying him with the funds to restructure the lagging team. Windhorst made an initial investment of $244 million and an implicit promise of more to come.

Although it has remained in the Bundesliga since 2013, Hertha, nicknamed the Old Lady, has long fought a reputation as a stale underachiever, especially for a capital city of Berlin’s size.

“The city has become a global brand,” Windhorst said. “And one would expect such a city to have a soccer club that is leading in Europe or at least Germany.”

But Hertha Berlin has been far from that. Its home games, in drafty Olympic Stadium in Berlin, reach capacity only when more prominent teams visit, as was the case Jan. 19 when Bayern Munich was in town (and beat Hertha handily, 4-0).

“In some parts of the city you can find more Dortmund Borussia pubs than Hertha fans,” said Lucas Vogelsang, a Hertha fan and host of the popular podcast Fussball MML.

While exaggerated, the point is verifiable: In no other German city are the local clubs so underrepresented in daily city life as the two Berlin clubs — Hertha and Union Berlin — despite Berlin’s dominant position in German society in nearly every other domain.

Klinsmann had hoped to take Hertha to prominence. But the fact that he announced his resignation with a Facebook post and not a more official channel underscored the tension he felt with the club’s leadership, though he said he would return to Hertha’s supervisory board, a post he held before agreeing to coach.

“Unity, cohesion and focus on the essentials are important elements, especially in a relegation battle,” Klinsmann wrote. “If that is not guaranteed, I cannot exploit my potential as a trainer and therefore cannot live up to my responsibility.”

As Klinsmann was attempting to turn the team around aggressively, Michael Preetz, the team’s sporting director, suggested he had to rein in the manager’s ambitions a bit.

“Perhaps my job is to step on the brakes from time to time,” Preetz told Bild last month. “But that doesn’t mean we are not rowing in the same direction.” 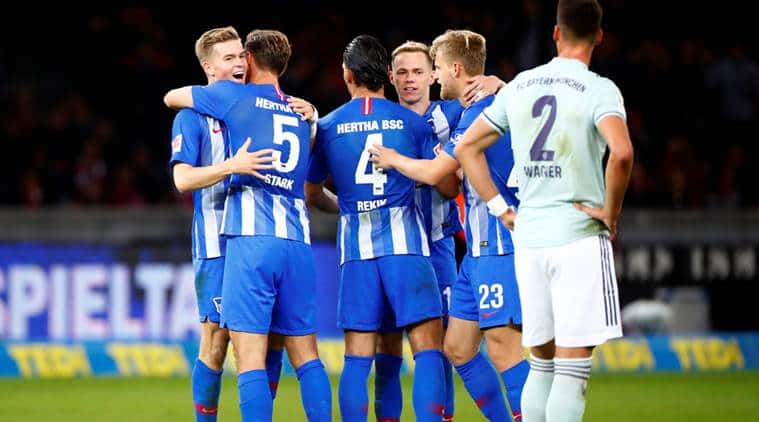 But the club continued to see mixed results. After an extra-time loss to Schalke in the German Cup a week ago, Hertha lost Saturday to Mainz, one of its main rivals in the battle to avoid relegation.

“It wasn’t Bavaria, it wasn’t Schalke, it wasn’t Leverkusen,” said Philipp Köster, the editor of the soccer magazine 11 Freunde, referring to the league’s top teams. “It was a team that they should have been able to master.”

“Jürgen Klinsmann likes to go all out in situations like this,” Köster said. “But for that to work, you need support from everyone around you.”

It was widely reported that Klinsmann wanted to negotiate a contract extension for next season and was disappointed when club management set those discussions aside.

“Management wanted to have a different kind of coach by the beginning of next season, and Klinsmann didn’t just want to fill the gap,” Vogelsang said.

Although Klinsmann was not available for comment Tuesday, he is expected to return to his home in Southern California, where he has lived for more than two decades.

“I like to surprise myself,” he said in January. “Somehow that is part of life.”

India vs Australia 1st Test Day 5 Live Streaming: When and Where to Watch, Live Coverage on TV and Online

I always like to bat as high as possible: Pant

Professor gets ‘threats’ for signing letter against PM

‘You are Jai, and me Veeru’: Vinod Kambli to Sachin Tendulkar on Friendship Day