Images from the IPL match between Kolkata Knight Riders and Delhi Capitals, in Ahmedabad, on Thursday.

Kolkata Knight Riders suffered another familiar batting collapse before late fireworks from Andre Russell lifted them to 154 for 6 in their IPL match against Delhi Capitals, in Ahmedabad, on Thursday.

The Knight Riders were well-placed at 69 for 1 at the half-way mark, but lost wickets in a heap and slumped to 82 for 5 in the 13th over.

It was left to some big hitting from Russell at the end that enabled them put up a fighting total.

The West Indian hit a 27-ball 45 not out, which was studded with two boundaries and four sixes, to give the innings a semblance of respectability. 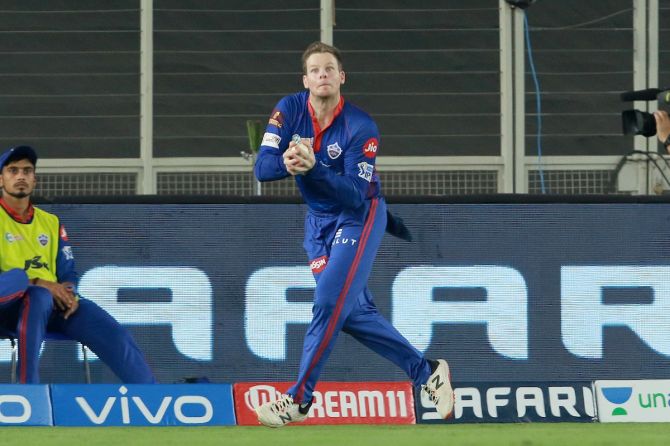 Earlier, opener Shubman Gill scored a 38-ball 43, which included three boundaries and six, but failed to convert his solid start into a big score.

Axar Patel and Lalit Yadav were the most impressive of the Delhi bowlers, with two wickets each.

Delhi Capitals won the toss and elected to bowl. They included Lalit Yadav in place of Amit Mishra, who is sidelined due to shoulder injury. KKR were unchanged. 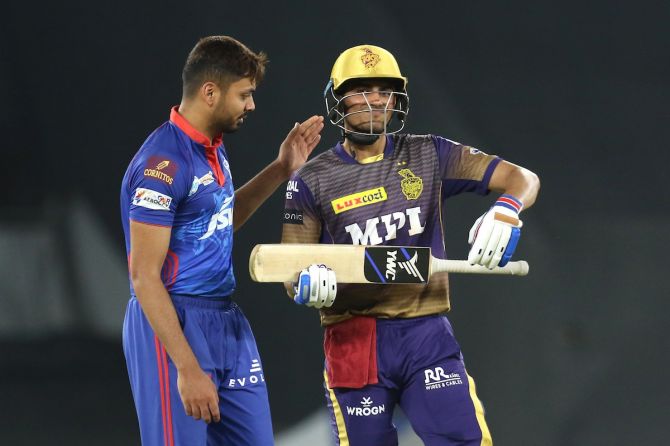 Nitish Rana, making his 50th appearance for KKR, and Shubman Gill opened the batting, while Ishant Sharma got the bowling underway for Delhi.

The pair put up 18 without loss before Axar Patel, introduced in the fourth over, ended Rana’s stay with his fourth delivery after being hit for a six by the batsman.

The left-arm spinner sent the ball down outside off and Rana advanced, missed and was stumped by wicketkeeper Rishabh Pant. Rana was out for 15 off 12, which included a four and six, and KKR were 25 for 1 at the end of the fourth over. Rahul Tripathi replaced Rana and along with Gill steadied KKR, guiding them to 41-1 after six overs. Gill grew in confidence, racing to 34 off 28 balls before time-out was called in the ninth over with 65 for 1.

Marcus Stoinis, the right-arm Aussie pacer, came into the attack in the tenth over and gave Delhi their second success of the evening, having Tripathi caught by Lalit Yadav. The batsman chipped a full length delivery outside off-stump and Yadav took the catch at sweeper cover. Tripathi was out for 19 off 17 balls and KKR were 69-2.

Skipper Eoin Morgan’s bad run continued as he was dismissed for a duck by Yadav in the next over after the addition of just five runs to KKR’s total.

The England batsman chopped the off-break from the bowler towards long-off, where Steven Smith took the offering after covering much ground. KKR were three down. Yadav picked another wicket a few deliveries later, his off-break having Sunil Narine, who replaced Morgan, bowled. KKR were 75-4 after 11 overs.

Avesh Khan then returned to the attack for his second over and ended Gill’s fine knock with the last ball of his second over. The opener lofted a slower delivery from the pacer to wide long-on, where Smith did well to race to his right and take the catch. Gill was out for 43 off 38 balls after hitting 3 fours and a six.

At 82 for 5 after the 13th over the Knight Riders were in deep trouble. It got worse when Axar trapped Dinesh Karthik leg before wicket.

But Andre Russell and Pat Cummins put together a partnership of 45 runs off 22 balls for the seventh wicket to give the Knight Riders 154 for 6 after 20 overs. Russell finished the innings in style, hitting Avesh for a six. The pair scored 42 off the last three overs, 13 off the last.

No one close to Hardik’s talent: Sehwag

Bhoot: Part One – The Haunted Ship new poster: Vicky Kaushal is struggling to get above water and we’re drowning in fear! | Bollywood Life

How Did Aaliyah Meet Damon Dash?

Work on DMIC’s Rajasthan portions to be fast-tracked