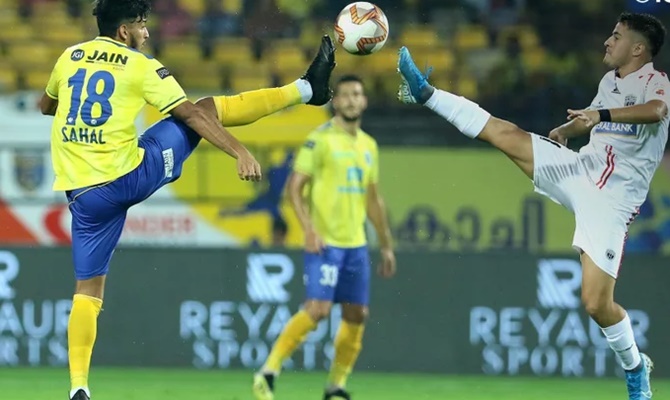 Kerala Blasters and NorthEast United settled for a 1-1 draw with both sides scoring from the penalty spot on either side of half-time in their Indian Super League match at the Jawaharlal Nehru Stadium, in Kochi, on Saturday.

Bartholomew Ogbeche and Asamoah Gyan’s penalties cancelled each other out as NorthEast continue their unbeaten run on the road, while Kerala Blasters were left without a win since the opening day of the season.

Kerala continued to occupy the ninth position with eight points from 10 matches while NorthEast are seventh with 11 points.

Eelco Schattorie chose to drop Messi Bouli and included Sahal Samad in his starting eleven. NorthEast were boosted with the return of Asamoah Gyan from injury as he started alongside Martin Chaves and Traidis Panagiotis in the attacking trident.

It was the home side who had the first opportunity as early as the seventh minute. Prasanth Karuthadathkuni unleashed a rocket from outside the box, but Subashish Chowdhury did well to parry it over.

At the other end from a set-piece by Triadis, Gyan made his presence felt as his towering header missed the target by a couple of inches.

Later, Mohammed Rakip gave away the ball cheaply and Lalthathanga Khawlring passed it to Gyan who was in acres of space. However, the high-profile Ghanaian striker skied his effort from inside the box, much to the disappointment of the NorthEast side.

After the half hour mark, Bartholomew Ogbeche was brought down outside the box by Kai Heerings. The ensuing free-kick by Mario Arques was parried away for a corner by the NorthEast custodian.

From the flag-kick, Moustapha Gning’s header went over the bar as he was left unmarked inside the box.

Schattorie then chose to substitute Sahal and bring in Messi in order to play more direct.

Kerala won a penalty when Ogbeche chased a pass by Arques and he was impeded in his run by the goalkeeper. The Nigerian striker converted the spot-kick by placing his shot to the left of goalkeeper Subashish Chowdhury to make it 1-0.

The equaliser came through another penalty in less than five minutes into the second half. Seityasen Singh was adjudged to have handled the ball from a Rakesh Pradhan cross and Gyan did the needful to make it 1-1.

The visitors should have doubled their tally when Gyan sent a through-ball for Redeem Tlang but the winger’s attempt missed the far post with only the goalkeeper to beat.

In the 67th minute, Khawlhring almost caught the Kerala defence by surprise as his left footed volley from inside the box was just about saved by T P Rehenesh.

The two coaches made attacking changes as Schattorie introduced Rahul KP while Jarni brought in Federico Gallego. However, neither team could create clear-cut chances in the final quarter of the game as they settled for a point each.

In the first big upset of this I-League season, Indian Arrows rallied to beat the in-form Churchill Brothers FC 2-1 in their own backyard in Margao.

Reaping the benefits of the tactical brilliance of head coach Shanmugam Venkatesh, the substitutes of the Arrows proved to be the game-changers.

This was the first win for Indian Arrows, the developmental side of the All India Football Federation, in four matches and the first defeat for Churchill Brothers in three games.

It was one of those rare days for Churchill Brothers when Dawda Ceesay started on the bench. Instead, head coach Bernardo Tavares began with Khalif Al Hassan.

Arrows dominated possession and pressed high, trying to get the first break of the match. The first major attempt came within five minutes of the start of play as captain Vikram Partap Singh made a run down the left flank, but the cross from him went straight to the Churchill keeper.

With 16 minutes on the clock, Willis Deon Plaza started to assert his presence in the game, beating two Arrows defenders, eventually to be tackled by Lalbiakhlua Jongte. The shot, though, was going towards the goal, which was eventually cleared off the line by Hormipam.

In the 30th minute, Churchill again came close to scoring as a cross from the right by Robert Junior Primus hit Hormipam and fell for Abu Bakr, but the latter failed to score with an open goal in front of him.

The home team was finally rewarded for its repeated attempts as a beautiful delivery by Israil Gurung from a corner found the towering head of Abu Bakr who gave them the lead minutes before the half-time whistle.

In the added time, Khalif Al Hassan’s shot from distance tested the Arrows keeper but the score stayed at 1-0 going into half-time.

The second half resumed with Churchill trying to slow down the pace of the game and Arrows looking to get an equaliser.

In the 47th minute, Aman Chetri who came on a substitute for Harmanpreet Singh, created a chance from the right but the cross could not be tapped in by Vikram.

With 64 minutes on the clock, Churchill came on with two changes as they brought on Dawda Ceesay for Vinil Poojary and Richard Costa for Vangchhia. Arrows also made their second change by bringing on Telem Suranjit Singh for Manvir Singh, who was struggling in the second half.

The moment of glory for Arrows finally came in the 78th minute, when a low cross by Aman Chetri from the right was smashed into the back of the net by an onrushing Givson Singh.

It looked like the match will end in a draw but a misunderstanding at the back between Junior Primus and James Kithan gave Arrows the lead, as substitute Telem Suranjit Singh capitalised on the offer and scored the second goal for the away side in the 90th minute.

Arrows did not back down till the end as Aman Chetri, who was proving to be the real impact substitute, showed immense individual skill and hit the goal post moments before the end of the game.

President’s nod to inquiry into ‘misgovernance’ at Delhi University