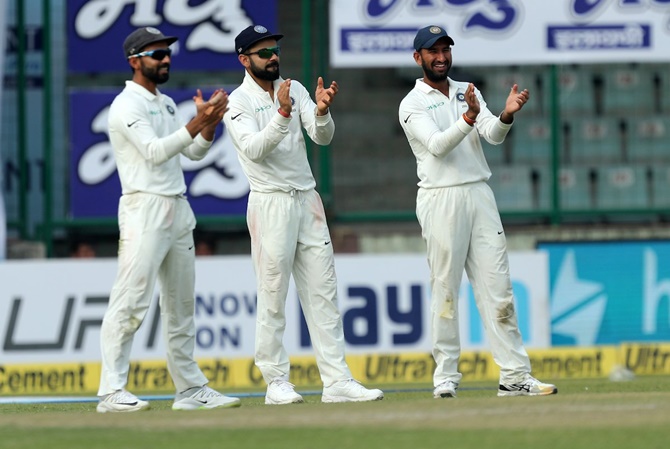 Shikhar Dhawan was on Saturday dropped for the two-match Test series against West Indies after his poor run in England while Mayank Agarwal and Mohammed Siraj’s achievements in the domestic circuit were rewarded with maiden India call-up.

The selectors decided to rest the pace duo of Bhuvneshwar Kumar and Jasprit Bumrah, taking into account their ‘recent workload’.

The pace bowling department looks a little inexperienced with Mohammad Shami and Umesh Yadav being the two experienced players in the Virat Kohli-led 15-member squad.

Mumbai’s Prithvi Shaw has retained his place in the side after failing to make the playing XI in the last two Tests in England. Considering that Dhawan has been shown the door, young Shaw could finally get his chance to open the batting with K L Rahul, who had saved his place with a fine knock in the final Test against England.

“Taking stock of the recent workload, the selectors have decided to rest Jasprit Bumrah and Bhuvneshwar Kumar. Both Ishant Sharma and Hardik Pandya were not considered for selection, as they are yet to recover from their injuries,” the Board of Control for Cricket in India acting secretary Amitabh Choudhary said in a statement.

The first Test will be played at the Saurashtra Cricket Association Stadium in Rajkot from October 4 to 9, followed by the second match at the Rajiv Gandhi International Stadium in Hyderabad from October 12 to 16.

Only 7 of 17 IT agreements signed during Tamil Nadu GIM 2015 have taken off, data reveals