An inspired Yadav ticked most boxes. Pace, he always, ratchets up. Away movement to the left-handed, he often purchases. But accuracy, discipline and Yadav had been historically uncomfortable bedfellows. 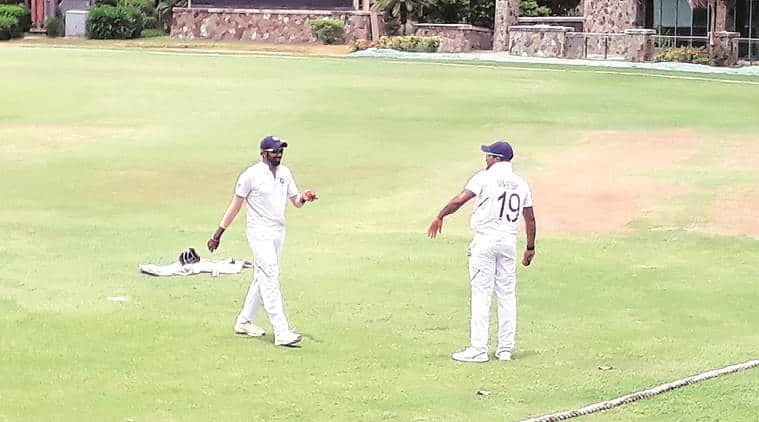 All days are lazy in Antigua. Sundays are lazier. Morning mass. Family breakfast in stalls outside homes. Fishing, beach, lunch, rum, nap. Wake up. Repeat. Life in these shores are idyllic. A few turned up at the Coolidge ground, where fishing apart, they could indulge in the day-long laziness, slip into a nostalgic trip, when they bossed the cricketing world. Why most of them are here—and most of them are winded-up middle-aged or older men, scant young faces—to reacquaint with their younger selves, bragging and squabbling, some of which nearly ending up in brawls.

But a shoddy batting performance pushed them firmly back into reality. In the fourth over, Ishant Sharma—they’re aghast he has cut his hair—took out their first batsman, Jeremy Solanzo, who was woefully reminded of his shortcoming at this level, nicking Sharma to KL at slips. Whether bowling or fielding, Sharma was at his vocal best, shrieking, screaming, shouting at his fellow bowlers or fielders whenever they erred. Irony was that when his own chance came to run a batsman out, he slipped. A peel of boos rang around the stadium.

But his first-spell was incisive, betraying nothing of a lengthy lay-off, but bowling at full pelt, working up a fine rhythm, and making the ball leap off from back-of-length. Soon after he had Brandon King nicked off to the keeper, the ball straightening after pitching. He then had both Darren Bravo and Kavem Hodge grope the thin air several times. While all of them, barring Darren Bravo, is not even quite A stuff—averaging from mid-20s to early 30s—Sharma was inscrutable, and bowling with the same intensity as he would during a Test match. Later, soon after lunch, he returned and took out the half-centurion Hodge with a vicious nip-backer, that swung back late.

Strangely, though, his new-ball accomplice Jasprit Bumrah was erratic. Maybe, it was one of those rarest of rare off-days. Maybe, he didn’t want to expose his hand so early. Maybe, he was intentionally bowling well within himself. Maybe, he was rusty after a frenetic last six months. Maybe, he wasn’t fully tuned-in. Whatever be, he wasn’t the impenetrable force he has been across the formats this year. When he strove for fuller lengths, he was too full. When he tried to compensate by shortening his length, he became too short, feeding more freebies to the Caribbean batsmen than he had in the entire World Cup. The yorker, bouncer, slower balls nothing worked as efficiently as if often does. The spell of 7-0-30-0 fully reflected his listlessness, which India would hope would be an aberration.

It wasn’t long before he paved way for Navdeep Saini, who continued to impress after his T20I incursions. How he didn’t purchase a wicket was a mystery, as he beat both batsmen’s both edges several times, hurried them with his skid, rapped them on the pads, struck them on their arms, but a wicket still eluded. He had the off-colour Bravo in strife several times, but by the skin of his teeth and oodles of fortune, he survived.

But not for too long, as Umesh Yadav nailed him with a typical away-goer to the left-hander, landing outside off-stump and going with the angle. Bravo had a nibble, unsure whether to play or leave it. The dilemma manifested in the form of an edge that flew to Rahul. It’s an old failing of Bravo, but one good enough to shove him into the fringes of the national side. Yadav celebrated as wildly as he would have in a test match, which was understandable, since he has had little of international action since the last December in Australia, and of all the Indian bowlers he had the bigger stakes, to press for his inclusion in the side.

An inspired Yadav ticked most boxes. Pace, he always, ratchets up. Away movement to the left-handed, he often purchases. But accuracy, discipline and Yadav had been historically uncomfortable bedfellows. On Sunday he demonstrated both in ample volumes, transforming him to a hostile force. He though would need more of these if he were to win back the Test stripes, now that his stocks have fallen behind Bumrah, Mohammad Shami, Ishant Sharma and Bhuvneshwar Kumar. It though wasn’t anything but a lazy Sunday for him.

He purchased a stolen bike to do this. Now people can’t stop praising him

Art in the marketplace: how the Kochi-Muziris Biennale is driving interests worldwide