The 39-year-old leg-spinner is currently the third-highest wicket-taker in IPL history (166 wickets in 154 matches). But Mishra went unsold at last weekend’s IPL auction in Bengaluru.

Mishra insists he isn’t ‘finished yet’. 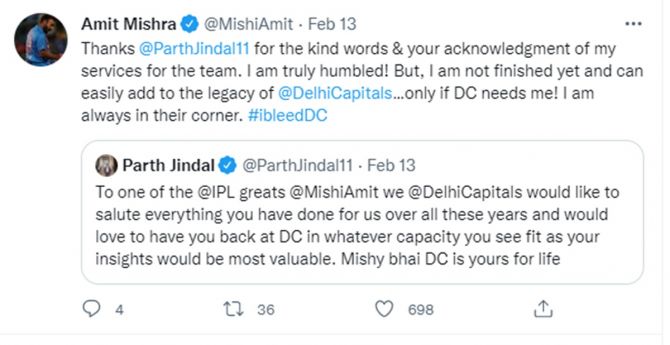 ‘Thanks @ParthJindal11 for the kind words & your acknowledgment of my services for the team. I am truly humbled! But, I am not finished yet and can easily add to the legacy of @DelhiCapitals… only if DC needs me! I am always in their corner. #ibleedDC,’ Mishra tweeted.

Mishra was part of the Delhi Capitals squad in the second phase of IPL 2021, but didn’t play a single game as the side reached the playoffs of the tournament.

The leg-spinner last played in the Indian domestic circuit in 2019 and his professional appearances had been limited to the Indian Premier League ever since.

‘Allow devotees in ‘Kaali’ attire inside Kulasekarapattinam temple for Dussehra

Told farmers we can amend laws… issue in only 1 state: Narendra Tomar in Parliament