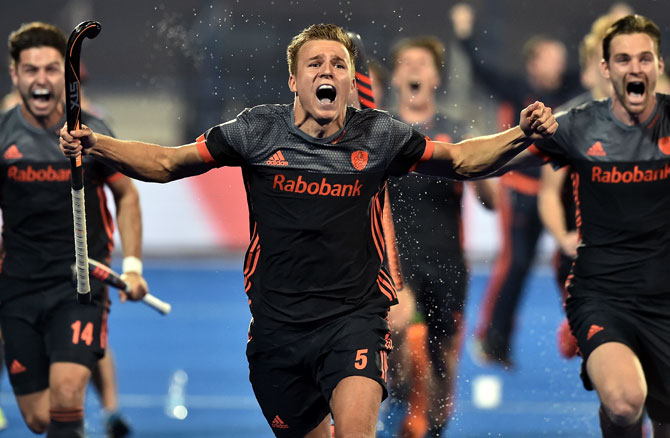 The Dutch thus took a sweet revenge of their 1-6 loss to the Kookaburras in the summit clash of the 2014 World Cup at the Hague.

The match went into shoot-out after both Netherlands and Australia were locked 2-2 at the end of regulation 60 minutes.

In the shoot-off, Daniel Beale, Tom Craig and Jake Whetton scored for Australia while Jeroen Hertzberger, Van Ass and Thijs van Dam were on target for the Dutch to take the encounter into sudden death.

But it was not to be Australia’s day, as Beale’s attempt was saved by Dutch goalkeeper Pirmin Blaak after Hertberger scored to take Netherlands to their second consecutive World Cup final.

Netherlands will face Olympic silver medallist Belgium in Sunday’s summit clash after the Red Lions spanked England 6-0 in the other semi-final earlier in the day.

World no.1 Australia will look for a consolation bronze medal when they take on England in the third-fourth place play-off match on Sunday.

Netherlands took time to get off the blocks as Australia did all the attacking in the initial few minutes but without much success.

After sitting back initially, the Dutchmen got into the groove slowly and had the first real scoring chance in the fourth minute through a penalty corner but Mnk van der Weerden’s flick was kept away by Australia goalkeeper Andrew Charter.

Netherlands kept up the pressure on the Australian defence and minutes later took the lead through Schuurman, who scored from close range after being set up by Jonas de Gues’ brilliant run down the right flank.

Three minutes from the end of first quarter, Mirco Pruijser’s deflection from Netherlands skipper Billy Bakker’s long ball down the middle hit the post. In the second quarter, Australia earned their first penalty corner but wasted it.

Netherlands and Australia traded one more penalty corner each in the next few minutes but both the teams failed to convert the chances.

Van Ass doubled Netherlands’ lead after his shot from right corner of the box went into the goal following a deflection from Australian Tim Howard’s stick.

Trailing by two goals, the Australians came out with purpose after the change of ends as they attacked in numbers in search of breakthroughs.

The Dutch too matched their rivals stick for stick as the game witnessed an end-to-end battle.

Australia pulled a goal back just at the stroke of third quarter through Howard who scored from a penalty corner after their variation went wrong.

Netherlands goalkeeper Blaak had a wonderful match, inflicting brilliant saves now and then to deny the Australians.

In the 53rd minute, an alert Blaak came up with a wonderful reflex save to keep out Flynn Ogilivie’s diving effort and then five minutes later the Dutch keeper made another stunning save to deny Blake Govers from Australia’s fourth penalty corner.

But the Australians did not give up hope and fought till their last breath, which resulted in getting the equaliser just 26 seconds from full time through Ockenden and take the match into shoot-out.

Belgium hit England for a six 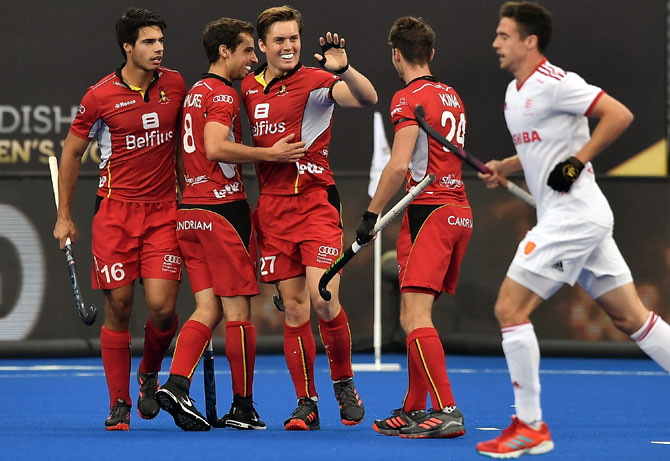 Prior to this, the Red Lions’ best performance in the World Cup was a fifth-place finish in the last edition of the tournament at The Hague, Netherlands in 2014.

In Sunday’s final, Belgium will take on Netherlands, who beat Australia in the second semi-final.

The Belgium players, who wore black armbands to pay respect to their teammate Gougnard whose father passed away before the match, dominated possession in the first two quarters and created a couple of promising chances, two of which resulted in goals.

It didn’t take long for Belgium to take the lead as Boon deflected in Florent van Aubel’s measured cross from the left in the eighth minute.

Just seconds from the end of first quarter, Boon again came close but his deflection from a long ball hit the post.

Belgium doubled their lead in the 19th minute through Gougnard, who scored from a rebound after Hendrick’s flick from their first penalty corner was saved by England captain and goalkeeper George Pinner.

Belgium missed a sitter three minutes from half time when an unmarked Dockier pushed wide Van Aubel’s pass, with only Pinner to beat.

Just a minute after the change of ends, England secured their first penalty corner, but the world number seven failed to capitalise on the opportunity.

Belgium extended their lead in the 42nd minute through Charlier, who scored with a fierce shot from a close range.

Minutes later, England earned another penalty corner but Belgium goalkeeper Vincent Vanasch was up to the task, and thwarted the danger with a fine save.

Seconds from the end of the third quarter, Belgium made it 4-0 when Hendrickx found the back of the English net from his team’s second penalty corner.

Belgium continued to toy with the English defence and pumped in two more goals in the fourth and final quarter to make the last-four contest a thoroughly one-sided affair.

Another penalty corner resulted in another goal through Hendrickx, in the 50th minute, before Dockier scored from a field effort three minutes later to complete the rout.

Towards the end of the match, England secured two more penalty corners but lack of execution let them down, as they rounded off a disappointing outing.

We understand that players are playing for their careers, says Bangar