During every match India’s colts have played in this World Cup, the senior team members have sat in the stand behind the goal and dutifully made notes. 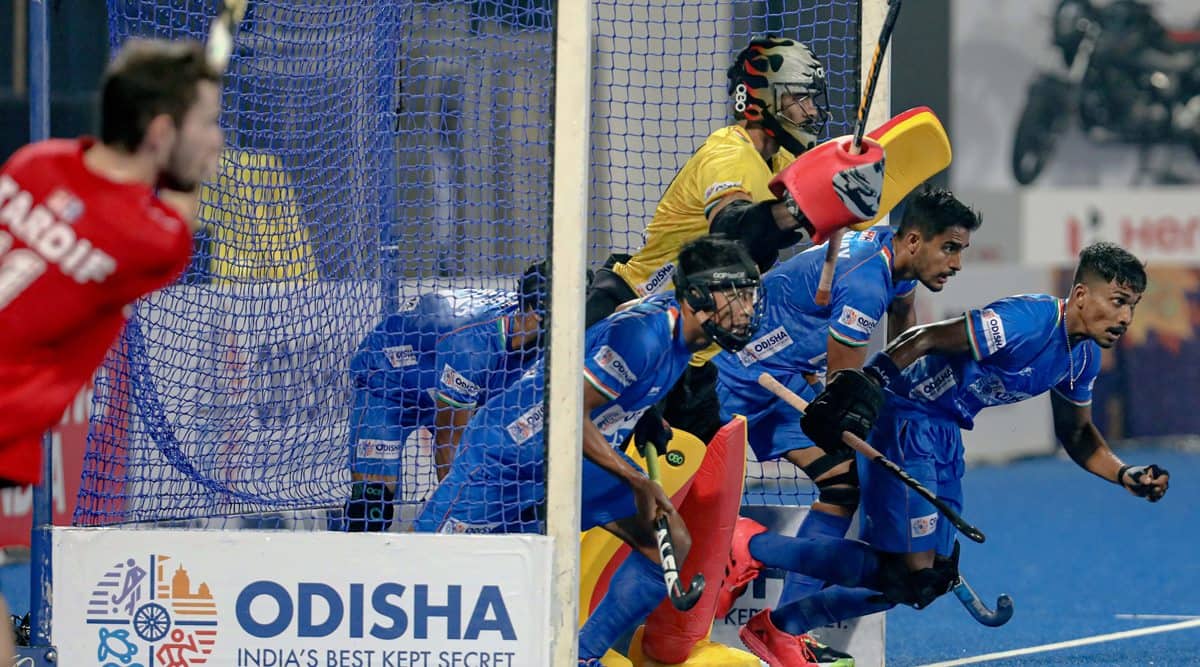 Hours after their shocking loss to France, some of India’s junior players received a link for an e-meeting. Their host was the Tokyo Olympics bronze medalist Harmanpreet Singh. Having watched from the stands the team concede five goals against an unheralded opponent, the defender-cum-drag-flicker had prepared a dossier of sorts.

Next door, India captain Manpreet Singh was having a conversation on leadership and tactics with the junior team skipper Vivek Sagar Prasad.

These weren’t crisis talks. Rather, just a casual exchange of ideas between veterans who have been there, done that and rookies for whom this is an initiation to international hockey, except Prasad who was in Tokyo as well.

The relationship between India’s senior and junior teams has evolved over the months. In the beginning, the colts were ‘respectful’ of the ‘seniors’, minding the gap. Then, they turned into training partners when the pandemic hit. And now, they idolise the bronze medalists.

Prasad is in awe of the way Manpreet carries the team together. Drag-flicker Sanjay Kumar, who has netted a couple of hat-tricks already, has modelled himself on Harmanpreet. Goalkeepers Pawan and Prashant Chauhan look up to PR Sreejesh and forward Araijeet Singh Hundal is in awe of Akashdeep Singh, who wasn’t in Tokyo but remains an integral part of the team.

Now, in Bhubaneswar, the U-21 players’ heroes have turned into their analysts and mentors. During every match India’s colts have played in this World Cup, the senior team members have sat in the stand behind the goal and dutifully made notes. “It’s a learning experience for us too,” says Manpreet. “We are analysing the games from the stands and after it’s over, we are giving the players our feedback.”

In a way, it’s returning a favour as well.

Both, senior and junior, teams had a far-from-desirable build-up to their respective marquee events of the year. For a major part of the last two years, they were locked inside Sports Authority of India’s Southern Centre in Bangalore, staying and training together.

As the Olympics got closer and with the national team barely getting any match practice due to the pandemic-forced travel restrictions, the junior team turned into a simulation machine of sorts for them.

During training, the coaches would make the under-21 side line-up and play like India’s opponents at the Tokyo Games: New Zealand one week, Australia the next; Argentina one week, Belgium in the one that followed. They even played six matches against each other, and the colts eked out a win in one.

The mentoring process began with that. “Whenever we used to spot something, we spoke to them. If they had any problem, they reached out to us,” Harmanpreet says. “They just needed some fine-tuning, not a lot of work. Overall, they are all very good.”

After India returned from Tokyo with the bronze, the senior team resources were shifted to the junior side. Chief coach Graham Reid was asked to take over the side and the players started to individually guide their juniors.

Even though both teams are in Bhubaneswar – the senior side preparing for next month’s Asian Champions Trophy – they are staying in separate bio-bubbles, which means physical interactions aren’t possible. “So, we have been in touch through online meetings,” Harmanpreet says.

The senior team vice-captain, who was a member of the 2016 Junior World Cup-winning side, has been guiding the defenders and drag-flickers, giving them ways to improve their positioning and finishing. He spoke to the two freemen – the player who floats between his team’s defence and midfield – in particular, Sanjay and Yashdeep Siwach.

“Even I play as a freeman so from whatever I observed watching from the stands, I told them. I spoke to them in detail about how they need to stay within the danger lines, aligning with the goalposts, so that they can intercept dangerous balls,” Harmanpreet says.

Against France, the only tough match they had in the group stage, India intercepted a lot of passes but weren’t able to control the ball, which ran out of play, thus conceding possession. Harmanpreet spoke with the rest of the defenders on their positioning – especially during outlets, the first pass that’s played from the back to restart the game – and marking.

And he gave tips to the drag-flickers on the ways they can beat the first rusher, positioning before taking the flick and finishing. “Harman keeps telling us the new skills we can learn, the way we can implement it. His ideas have really helped us,” Sanjay, the junior team’s go-to drag-flicker, says.

Not the first time

This isn’t the first time senior team players are assisting the juniors. In 2016, goalkeeper PR Sreejesh mentored the two U-21 custodians before and during the World Cup, which came in very handy. In fact, one of the players from that side – Krishan Pathak – is now an India regular and will be the team’s main goalkeeper at the Asian Champions Trophy, for which Sreejesh has been rested.

For the senior players, analysing the junior sides from the stands has helped them improve knowledge about their opponents, given that the styles and patterns used by most teams in the World Cup have been very similar to their senior sides. “So, while watching them, we also understand the areas where we can improve,” Manpreet, who captained India in the 2013 Junior World Cup, says.

After the team lost to France, the biggest upset of the Junior World Cup so far, Manpreet had an immediate talk with Prasad. He didn’t sugarcoat the performances but stressed the importance of making sure there wasn’t any finger-pointing within the team.

“I told him we could have done better. But that wasn’t a time to blame anyone or finger-point. He had to lead the team on the field, make sure the players communicated with each other and showed unity,” Manpreet says. “They need to believe in themselves.”

Manpreet knows. Belief carried the team onto the podium in Tokyo.

And as the colts prepare for the biggest test of their nascent careers, facing Belgium in Wednesday’s quarterfinals, they’ll know the seniors have their backs.

No health and land reclamation plan in place in Kudupu-Mandara: Khader