Manchester City manager Pep Guardiola has praised Erling Haaland as the epitome of an all-round goal-scorer and believes the 20-year-old striker is setting standards few have ever reached at his age. 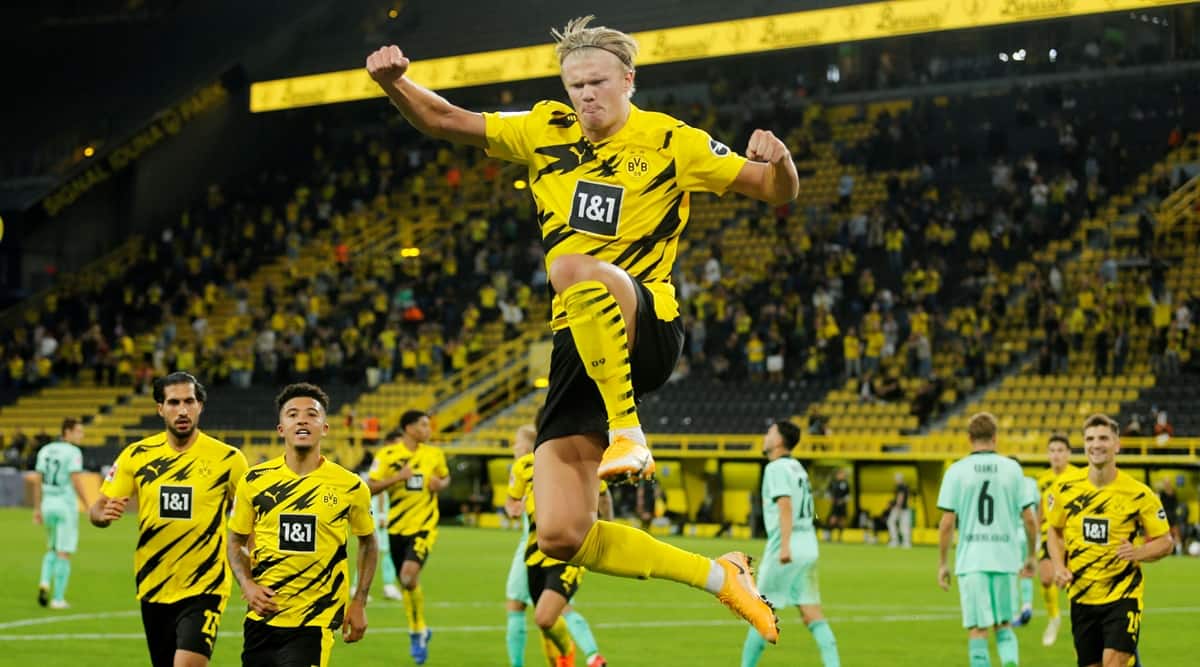 Manchester City manager Pep Guardiola has praised Erling Haaland as the epitome of an all-round goal-scorer and believes the 20-year-old striker is setting standards few have ever reached at his age.

Haaland will be the biggest threat to City when Borussia Dortmund arrives at Etihad Stadium for the first leg of their Champions League quarterfinal on Tuesday, having scored a competition-high 10 goals this season.

He is also the youngest player to reach 20 goals in the Champions League _ at 20 years, 231 days _ and he got to that milestone in just 14 games, also a record.

Haaland has been heavily linked with a move to City, which needs to replace departing striker Sergio Aguero at the end of the season, and Guardiola is clearly a fan of the Norway international.

“At that age, to score this amount of goals is not easy to find in the past, honestly,” Guardiola said Monday. “The numbers, they speak for themselves. When that happens, it’s because he can score right, left, on the counterattack, in the box, when you dominate, when you make counterattacks, in the headers.

“He is a fantastic striker. Everybody knows it. A blind guy realizes he is a good striker. It’s not necessary to be a manager to realize (that) about him.”

Guardiola has refused to discuss a potential move for Haaland in the offseason out of respect for the player and Dortmund, and said last week that City might not even sign a replacement for Aguero because the club cannot afford a top-class striker.

City’s record signing in pounds is Ruben Dias, a center back who joined from Benfica for 64 million pounds ($78 million) last year, and the club’s policy so far has been to veer away from recruiting ready-made superstars.
Guardiola said the club is open to the possibility of changing that approach but does not believe it would be a game-changer for City, which has never won the Champions League.

“It’s not that spending on one player a lot of money gives you an advantage to win,” he said. “Football is a team game. Everyone makes his contribution _ the guys who don’t play, the backroom staff, everyone. This competition will not be won by one player, it is for absolutely everyone.

“So far, the club has decided to spend not close to 100 million (pounds) for a player. Maybe in the future it is going to happen if the club decides it is necessary to improve the team for the next 5-10 years, for many reasons. But so far, the club, the organization, the CEO, the sporting director, decides, `Don’t do it.’”

City has been eliminated at the quarterfinal stage for the past three seasons _ by Liverpool, Tottenham and Lyon _ and has only ever reached the semifinals once, under Manuel Pellegrini in the 2015-16 season.

That is a huge underperformance for a club that has spent heavily under its Abu Dhabi ownership since 2008 and has been the dominant force in the Premier League for the past decade. City leads the Premier League by 14 points and is in sight of a fifth title since 2012.

“We are already a big club. Not (a big) team, but a big club, a big organization. We are already,” Guardiola said. “But everyone here _ myself, the players _ want to try to do better than we have done in this competition through the history of Manchester City, especially since we have been together.

“Of course, we want to do it but for the fact that we want to, want to, want to, want to, we are not going to do if we don’t play good. We analyze Borussia Dortmund, who they are as individuals, as a group, as a team, the different systems they play, the same as we have done Leicester last game (in the Premier League on Saturday). After, guys, the football belongs to you.”