‘India has the best bowling attack they have ever had at any World Cup.’
‘They have the best fast bowler in the world in Jasprit Bumrah and then they have got Bhuvneshwar Kumar, who looks good, (Mohammed) Shami looks good.’

No one knows winning World Cups better than Gautam Gambhir.

“Hardik Pandya is going to be the X-factor after Jasprit Bumrah,” Gambhir tells Rediff.com‘s Harish Kotian.

What went into winning the 2011 World Cup? What was the one key thing which you could say led to the triumph?

Probably, we had a fabulous team, we had the experience, we had the youth, we had everything that a good World Cup champion should have.

Tell us about your match-winning 97 in the final because we were chasing a daunting 275 for victory, and Sehwag and Tendulkar fell early.
What was going on in your mind while you were batting in the middle?

There was nothing in my mind. I always believe that the occasion can never get better of any player because ultimately the contest is between bat and ball.

It is not the World Cup final, it is a contest between the bowler and the batsman.

How many contests you win will probably decide how many runs you will score.

And probably the blessing in disguise that happened was by the time I realised that I had go into bat I was already in because Sehwag had got out off the second delivery.

The only time I got was probably when he took the review.

And when you are not thinking anything and you are right in the middle, then all the thoughts go out of the system and you are just watching the ball and then facing Malinga.

Probably that was a blessing in disguise because I didn’t have to wait for my turn and didn’t let the occasion get the better of me.

How satisfying was it to play a match-winning knock in a big match like the World Cup final?

Those are the moments you practice for. You don’t practice for occasions when you score your own hundreds, double hundreds.

And that is what makes you a player in your own eyes.

Irrespective of what people think, in your own eyes you are a great player. How do you rate India’s chances at the World Cup? Would you say India are going in with more questions than answers especially in the batting?

I don’t think so. India has got a very good side. India has the best bowling attack they have ever had at any World Cup.

It is all about putting runs on the board.

Let’s see how the conditions are going to be. If the kind of conditions that are there in England, then obviously it is going to be a high scoring World Cup.

I think India is going to be a top side during the World Cup. 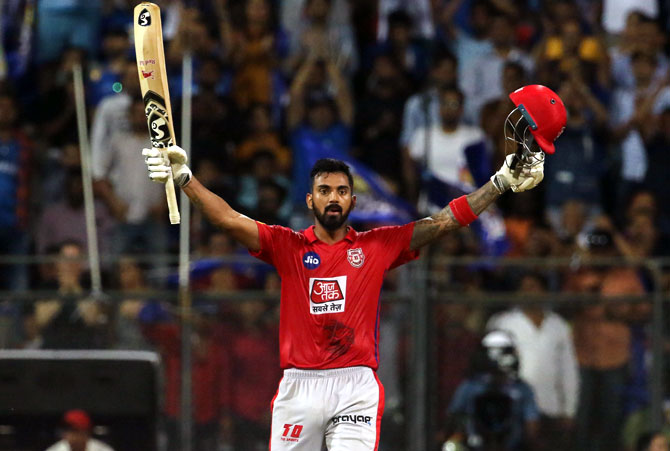 But there are some question marks in the batting like they don’t have a batsman earmarked for No 4.
Who do you think should bat at that position?

K L Rahul should be in the playing XI, the kind of form he is in.

If Rahul can’t open, then he should bat at No 4 because he looks the best batter among all the guys who are on the bench, whether it is Dinesh Karthik or Vijay Shankar.

Rahul should be batting at No 4 in the World Cup.

Is there some area which India needs to address going into the World Cup?

The fifth bowler worries me a bit, whether you have Hardik Pandya or Kedar Jadhav giving you 10 overs.

You will have flat wickets during the World Cup in England. The last ODI that happened (England vs Pakistan), the teams scored around 360-something, it is a ridiculous amount of runs.

We should stop talking about conditions in white ball cricket, because whether it is England, Australia or India, the conditions are the same.

350 has become the par score now. That is what worries me a lot because I feel going forward whether the young generation will want to take bowling as well.

A young fast bowler watching that kind of match would not want to take up bowling just to get hammered.

The ICC needs to be careful as well, not thinking about broadcasters and spectators only, they need to think about the next generation as well.

Kuldeep Yadav started off at KKR under your captaincy and he did come up well in the first two years. But this year he struggled in the IPL and was even dropped.
Will this affect him during the World Cup?

I don’t think it is going to make a lot of difference because the T20 format is completely different to the ODI format and he is a quality bowler.

It was a little surprising that they (Kolkata Knight Riders) dropped him from the playing XI because a young player should be backed.

And that is the only way he can get his confidence back is by getting on the field.

You can’t be sitting on the bench and get your confidence. So it was a bit of surprise because he was the wicket-taking option.

The way they selected the team and the way they made some of the changes in the playing XI wasn’t the best.

Maybe they could use him in a different way, maybe bowled him some easy overs like the seventh over to get his confidence back.

What is your view on the World Cup format wherein all 10 teams play each other in the group before the top four qualify for the semis?

This is the best format. I think this is what the format should be, going forward in every World Cup because this is where you will get the actual World champions.

You are playing against every country, every opposition, so the best team will win the World Cup.

There will not be something being lucky or being in a stronger pool or a weaker pool. You will play every opposition in the World Cup and you will find the actual World champion.

Hardik Pandya took the IPL by storm with his sensational strokeplay. How important a role will he play in the World Cup as an all-rounder?

Pandya is going to be the X-factor after Jasprit Bumrah.

The kind of number he is going to bat, he will give you two things — batting and bowling.

The kind of form he is in, he will be a huge plus for India, but then World Cup is a completely different ball game to T20 cricket.

Everything looks good till now, the kind of hitting form he is in. I am sure he will be confident and it will help India at the World Cup.

Rohit Sharma won his fourth IPL title as captain, the most by any team in the history of the tournament.
Is he presenting himself as a good option for India’s captaincy going forward?

He has won the IPL titles four times, he is the most successful captain in the IPL.

So he is not only an option, probably he is right next to Virat Kohli.

So from the captaincy point of view, you can’t compare both of them.

Is Indian athletics finding its feet?

England will be at the heart of a special World Cup, says Michael Vaughan

Pawan Surpassed His ‘Owner’ In U-Turns

The Last Thing He Wanted trailer: Anne Hathaway-Ben Affleck starrer seems to be a run-of-the-mill affair
We and our partners use cookies on this site to improve our service, perform analytics, personalize advertising, measure advertising performance, and remember website preferences.Ok