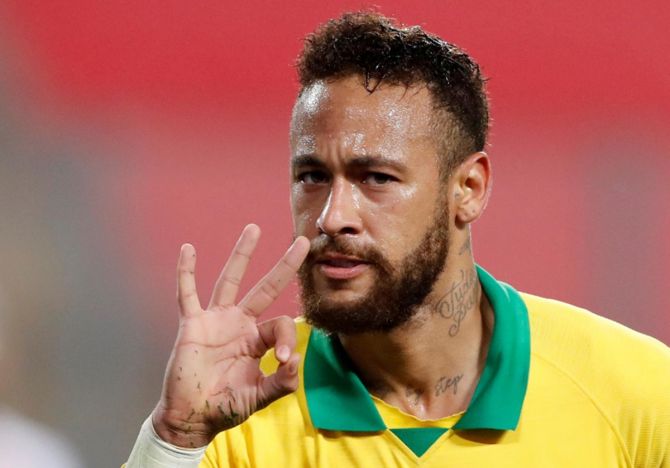 Neymar overtook Ronaldo and moved into second place behind Pele on Brazil’s all-time goalscoring list after notching a hat-trick in a 4-2 victory over Peru on Tuesday in a World Cup qualifier.

The Paris St Germain striker now has 64 goals, two more than Ronaldo and 13 behind Pele, who heads the list with 77, according to the count by world governing body FIFA.

Brazil coach Tite was reluctant to compare his current star with past greats.

“What I can say is Neymar has this unpredictability. He is the bow and the arrow, he’s a player who both makes and takes chances. And he gets better and better, and more mature.”

On Tuesday, Neymar equalled and then surpassed Ronaldo with two penalties either side of halftime before grabbing No. 64 in injury time at Lima’s National stadium.

The 28-year old celebrated by holding up the number nine with his hands in what appeared to be a tribute to Ronaldo, the former Barcelona, Real Madrid and Corinthians striker. 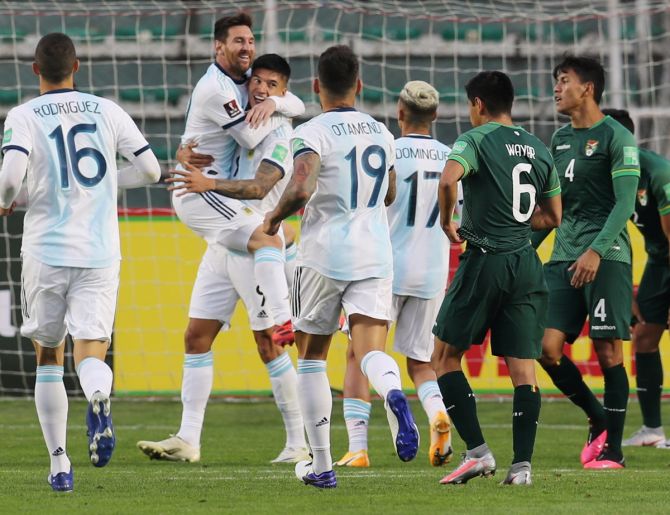 A late goal from Joaquin Correa helped Argentina come from behind to beat Bolivia 2-1 on Tuesday and maintain their 100% record in the South American World Cup qualifiers.

Bolivia took the lead after 24 minutes when captain Marcelo Martins rose unmarked to head home a cross from the left.

However, Argentina, who beat visitors Ecuador 1-0 in their opener last week, equalised seconds before halftime when a clearance from defender Jose Maria Carrasco hit Lautaro Martinez just yards from goal and flew into the net.

Correa got Argentina’s winner with a sweet left-foot strike 11 minutes from the final whistle as Bolivia suffered another defeat following their 5-0 thrashing away to Brazil last week.

The top four sides in the 10-team South American group qualify directly for the finals at Qatar 2022 and the fifth-placed side goes into an inter-regional playoff.

Penalty shootouts can test the nerves of even the most loyal soccer supporter but one Albion Rovers fan exuded a sense of confidence even as his side needed 15 spot-kicks to see off Stanraer in a Scottish League Cup clash.

Stranraer midfielder Connor McManus had brought the run of 28 successful attempts from the sides to an end when his second kick of the night cannoned off the crossbar.

Lynas, who had scored earlier in the shootout, then stepped up and put the ball into the bottom right corner of the net past Stranraer goalkeeper Greg Fleming.

Fleming and Rovers’ goalkeeper Ryan Goodfellow had both scored from the spot.

While the match marked the highest-scoring shootout in a major Scottish competition it was still some way behind the record of 48 penalties taken in KK Palave’s 17-16 win over Civics in a 2005 Namibian Cup fixture, according to the Guinness Book of World Records.