The biggest showdown in European football is back with Euro 2020, a year later than scheduled on account of the global pandemic.

And what an exciting week it has been, with players returning to packed stadiums, some memorable individual and team performances and a medical incident which had the world on edge.

Laxmi Negi/Rediff.com picks 5 top team performances from the opening round of matches. Take a look: 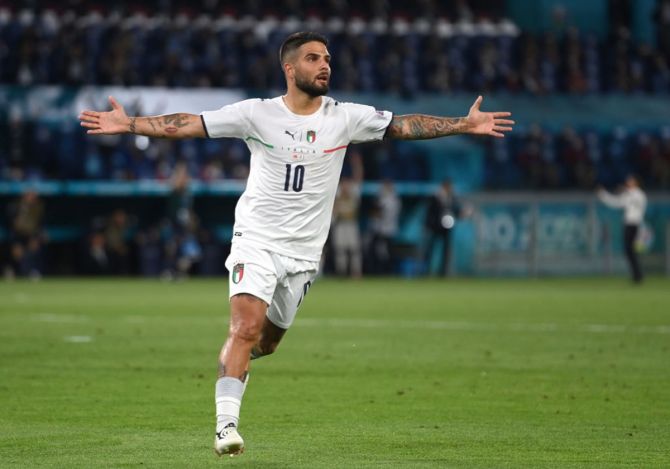 The Azzuri set a high bar in the tournament opener in Rome against Turkey and controlled proceeding from start to finish.

After a barren first half which was dominated by Italy, the floodgates finally opened in the second, with goals arriving at regular intervals.

Renowned for their defence, the Italians looked rock-solid at the back and rarely allowed Turkey to make inroads into the final third.

Overall, from a tactical stand-point, Italy looks like a perfectly balanced side who have all it takes to go far into the tournament England came into the tournament with the customary media hype that bills them to be top title challengers and the team put in a classy performance on home turf against an ageing Croatia outfit.

Wembley has been a stronghold for the English in the international arena and the team went on the offensive with Phil Foden rattling the crossbar early on.

Croatia seemed content to sit back and play on the counter and despite the constant pressure, were able to go into the half-time break with the scores levelled at 0-0.

The all-important winner arrived midway through the second half when Raheem Sterling timed his run to perfection to latch on to a through ball by Kalvin Phillips for a close-range finish.

The result marked the first time that England had registered a win on their opening day in the Euros. Belgium have been atop FIFA’s World Rankings since September 2018 and have been billed pre-tournament favourites on a consistent basis in recent international tournaments.

What unfolded in St Petersburg was yet another example of an attacking masterclass against a lacklustre Russian outfit.

Romelu Lukaku, fresh off an outstanding title winning season with Inter, kicked off proceedings as early as the 10th minute to silence the home crowd and set the tone for the rest of the tie.

After a couple of close calls, Belgium finally doubled their lead courtesy a Tjomas Meunier strike just past the halfway mark.

Eventually, the rout was completed two minutes from the final whistle when Lukaku scored his second of the night in trademark fashion — out-pacing his marker to a through ball from midfield and slotting home at the near post to make it 3-0.

The margin of victory equalled Belgium’s biggest Euro group stage win — the Belgians beat the Republic of Ireland by the same scoreline in 2016. Despite the advantage of playing in front of 65,000 noisy fans in Budapest, the odds were stacked heavily against Hungary as they took on defending champions Portugal in their opening encounter.

Their defensive approach paid dividends as they kept the score tied at 0-0 going into the half-time break.

Egged on by the crowd, the Hungarians slowly worked their way into the game and looked all set to rescue a point only for their dreams to come crashing down in spectacular fashion in the final minutes of the game.

Raphael Guerreiro pounced on a loose ball inside a crowded penalty area and his resultant strike took a lucky deflection to give Portugal the lead in the 85th minute.

The goal instantly galvanised the Portuguese, none more so than Cristiano Ronaldo, who had been largely inconsequential up to that point.

Barely two minutes later, they fashioned arguably the best ‘team goal’ of the opening round involving a series of intricate passes in the final third and capped off by Ronaldo rounding the ‘keeper to make it 3-0.

Ronaldo became the first player to feature and score in five consecutive Euro Championships and his brace in this fixture enabled him to overtake Michel Platini as the all-time leading goal-scorer in Euro history. It was billed as the biggest encounter of the opening round and both teams delivered on a spectacular night in Munich.

World Champions France showed exactly why they are favourites to win the title with an all-round performance from a star-studded lineup.

With the likes of Paul Pogba and N’ Golo Kante in midfield and the attacking prowess of Kylian Mbappe, Karim Benzema and Antoine Griezmann up front, the pressure was intense and the German defence finally cracked in the 20th minute when Mats Hummels cleared the ball into his own net.

Following the goal, France looked to hold on to their lead and play on the counter.

Germany, famed for its remarkable comebacks in the past, tried to fashion an equaliser and came agonisingly close through Serge Gnarby late in the second half.

At the full time whistle, France cemented their favourites tag and are now currently unbeaten in their last 17 games.

Cricket Boards brace for losses in the time of coronavirus