A round-up of the action in the Premier League on Sunday.

Villa win away at Brighton

Aston Villa continued their fine start under Unai Emery by coming from behind to win 2-1 at Brighton & Hove Albion on Sunday as two goals from striker Danny Ings helped them to get their first away victory in the Premier League for six months.

Villa, who beat Manchester United 3-1 last Sunday in Spanish coach Emery’s first game since succeeding Steven Gerrard, climbed to 12th in the table on 18 points after 15 games. Brighton are seventh on 21 after 14 matches.

Brighton took the lead in the opening minute when Argentine midfielder Alexis Mac Allister intercepted a pass from Villa goalkeeper Emiliano Martinez to Douglas Luiz outside the area and lashed the ball into the net. The strike, after 49 seconds, was Brighton’s fastest-ever goal in the Premier League.

Ings hauled Villa back into the game with a penalty, powering the ball past Robert Sanchez from the spot in the 20th minute after Lewis Dunk had tripped John McGinn.

The striker then put Villa in front in the 54th minute with a deft piece of skill and finish from inside the area after Luiz took revenge on Mac Allister by mugging the Argentine outside the box and slipping the ball to Ings.

Brighton, who lost midfielder Adam Lallana to injury early in the match, dominated the latter stages of the game but missed a flurry of chances and had a strong penalty appeal turned down when Solly March was felled by Lucas Digne.

The defeat halted Brighton’s impressive three-game winning streak which included a 4-1 win over Chelsea and a 3-1 victory at Arsenal in the League Cup on Wednesday.

Mac Allister and coach Roberto De Zerbi were both critical of the referee for not penalising Villa’s time wasting and also felt they should have been awarded the penalty.

“In the second half, there was no game. They wasted time. The referee let them waste time. We didn’t play as much as we wanted to. That’s the way they want to play football,” Mac Allister told the BBC.

Italian coach De Zerbi added: “I think we speak always about fair play in the Premier League. I didn’t see it today. I have one idea, one opinion but I don’t want to speak about this. I say to watch again the first penalty for them and the second for March and you can understand everything,” 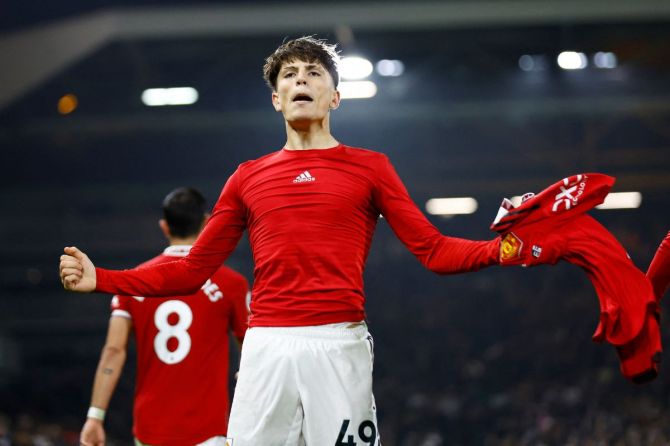 Alejandro Garnacho came off the bench to score a stoppage-time winner for Manchester United as they beat Fulham 2-1 at Craven Cottage in their final Premier League game before the World Cup break on Sunday.

Christian Eriksen, who is set to play for Denmark at the World Cup, scored the opener in the 14th minute, sliding in at the far post to steer the ball home after Anthony Martial and Bruno Fernandes combined cleverly to create the chance.

The goal was his first in the Premier League for United, and Eriksen had a great chance to double his side’s lead in first-half stoppage time when he was picked out in the box by Fernandes, but this time he stabbed his shot wide of the near post.

Carlos Vinicius almost put Fulham level just after the break, twisting to fire a shot that goalkeeper David De Gea steered behind, and the Spaniard pulled off another tremendous save to keep out Tim Ream’s headed effort from the subsequent corner.

The home side equalised in the 61st minute with a goal eerily similar to Manchester United’s as winger Willian played Tom Cairney free down the right and he centred for ex-United winger Daniel James to score two minutes after he came off the bench.

Fulham’s Joao Palhinha and United’s Scott McTominay wasted decent chances for their respective sides with wayward headers, and the game looked to be heading for a draw until the 18-year-old Garnacho struck.

After coming on in the 72nd minute for Martial, he had some promising raids down the left before charging into the box in the third minute of stoppage time to fire his first Premier League goal and snatch all three points.

The result means Manchester United, whose next league game is at home to Nottingham Forest on Dec. 27, will celebrate Christmas in fifth place on 26 points, while Fulham, who travel to Crystal Palace on Dec. 26, are ninth on 19 points.

Milkha Singh continues to be stable, shifted out of ICU; wife admitted with COVID pneumonia

Autopsy: Pilot in Kobe Bryant crash had no alcohol, drugs

Baaghi 3, Angrezi Medium will be re-released

Prince Harry Rebels Against Royals’ ‘No Selfie’ Rule To Pose With Boy, 6, Whose Mom Died

I had gone into survival mode, could’ve been more free-flowing: Joe Denly

Flipkart: FDI norms compliance not under our ambit, says CCI