Images from the English Premier League matches on Saturday. 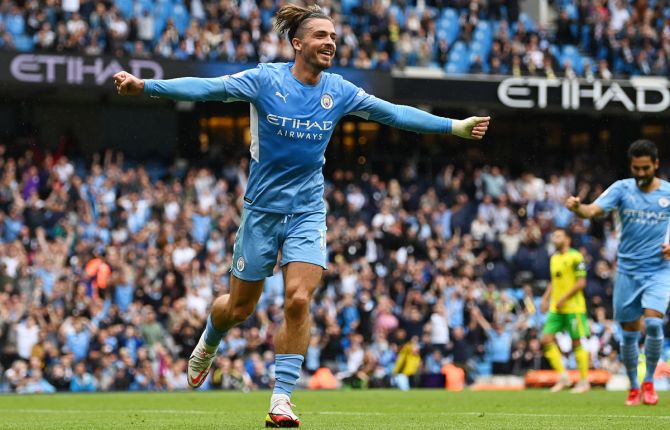 Grealish bundled in a low cross by Gabriel Jesus in the 22nd minute to double City’s lead after they had taken the lead in the seventh minute with a Tim Krul own goal.

Beaten in their opening game at Tottenham Hotspur last weekend, City looked far sharper and swarmed all over a lightweight Norwich. They also had a Ferran Torres goal ruled out inside the opening 20 minutes.

Norwich, who lost 3-0 to Liverpool on the opening day, avoided any further damage until midway through the second half when Aymeric Laporte fired in from close range.

City then turned the screw with Raheem Sterling and Riyad Mahrez both getting on the scoresheet with well-worked goals.

It was an impressive display by City and a memorable day for their 100-million pound man Grealish, although it was Brazilian Jesus who stole the show with three assists.

It always looked like being a long afternoon for Norwich once they fell behind in cruel fashion in the seventh minute when defender Grant Hanley’s clearance from a Jesus cross cannoned into keeper Krul and into the net.

Jesus was a constant menace down the right flank, and it was another of his crosses that hit Grealish on the knee to wrong-foot a Norwich defender and cross the line.

Norwich defended resolutely, but City always had another gear and stepped it up midway through the second half with Laporte shooting home after Norwich failed to clear a ball into the area.

Sterling and Mahrez had both started on the bench but were quick to join the party when replacing Torres and Grealish.

Norwich were sliced open again in the 71st minute by Kyle Walker’s through ball which Jesus turned across the area to give Sterling the easiest of tap-ins.

Ruben Dias then chipped a pass over the Norwich defence and Mahrez controlled superbly before guiding his shot past Krul.

For Norwich it has been a chastening return to the top flight, and they will have to dust themselves down for the visit of Leicester City next weekend. 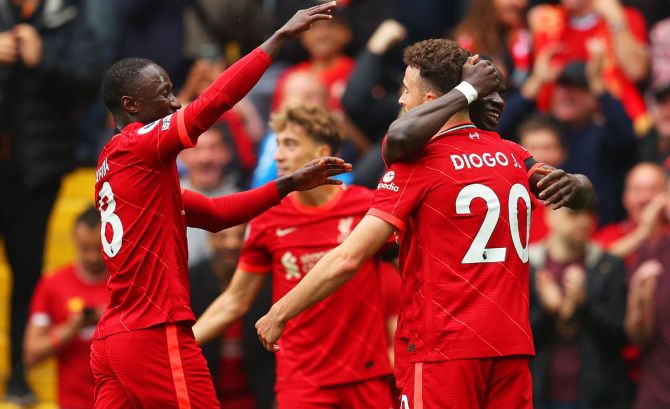 Liverpool made it two wins from two at the start of the new Premier League season as they cruised to a 2-0 home victory over Burnley on Saturday.

Diogo Jota edged Liverpool in front with his second goal in as many games in the 18th minute, a brilliant header in front of a first full Anfield in 17 months.

Burnley, the team who last season ended Liverpool’s 68-match unbeaten home league run, a record that stretched back almost four years, had chances to level, but their final ball was lacking at the crucial moment.

Ashley Barnes thought he had levelled early in the second half, only to be denied by the offside flag, with Liverpool capitalising on their reprieve in the 69th minute, as Sadio Mane drilled home their second.

The hosts pressed for a third, urged on by a buoyant crowd, but they settled for two, and a second clean sheet of the campaign, to go top of the standings, and leave Burnley pointless from their opening two matches.

“I think the performance was good at times,” Liverpool captain Jordan Henderson told BT Sport. “There’s still places where we can improve of course, but overall we’re delighted.

“The fans are back, it was great to have them back, they gave us a lift. And we got the result in the end, so that’s the most important thing.” 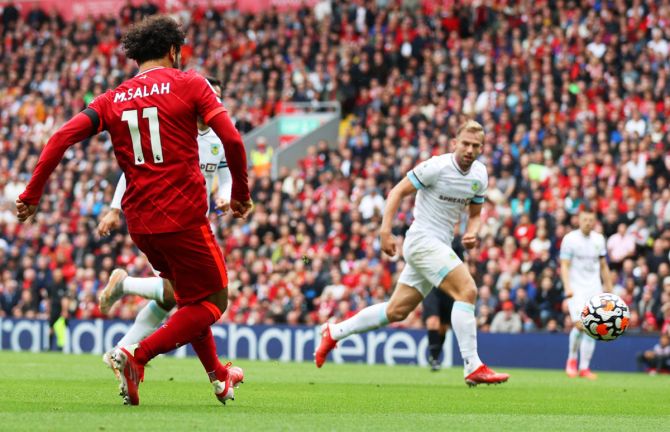 With Anfield in fine voice, at capacity for the first time since Liverpool’s Champions League defeat by Atletico Madrid in March last year, the visitors looked like they might become the first Burnley team since 1897 to win back-to-back league games at the famous stadium after making a bright start.

Firstly, Dwight McNeil was just offside when he was denied by the post, before Chris Wood was thwarted by a smart save from Liverpool goalkeeper Alisson.

But, for the second time in as many games, Jota settled Liverpool nerves, scoring his first Anfield goal since November last year.

Burnley, who fielded a starting XI consisting only of players with numbers one to 11 on their backs – the first Premier League team since Charlton Athletic in 1998 to do so – remained undeterred, with McNeil again going close moments after Liverpool’s opener.

Salah then thought he had his 99th Premier League career goal, only for VAR to rule it out for offside, with Barnes also seeing a fine finish cancelled early in the second half.

Liverpool stepped it up another gear, with the pressure telling as Mane hammered home his first of the season after a flicked pass from Trent Alexander-Arnold.

While Chelsea and Manchester City have both been tipped to be eventual champions this season, very few have predicted Liverpool can go all the way and wrestle the title back from City.

But this comfortable victory means Juergen Klopp’s side are unbeaten in 12 matches in the league – the longest run in the division. With Virgil van Dijk back in defence, they look a formidable unit once again. 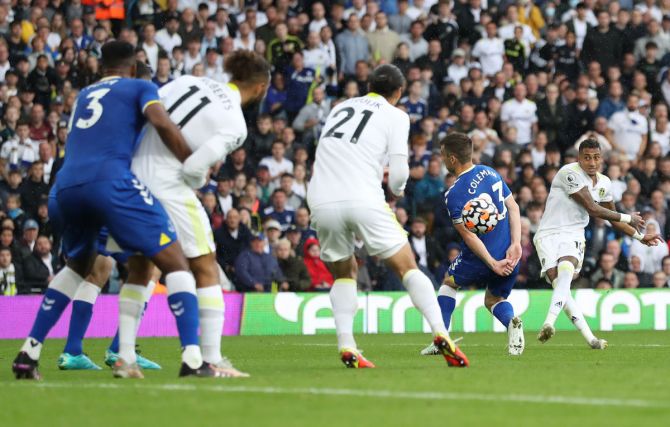 Leeds United winger Raphinha blasted in a second-half equaliser as the battling Yorkshire side came back twice to secure a 2-2 draw with Everton in the Premier League on Saturday and pick up their first point of the season.

Raphinha, who was called up to the Brazilian squad for the first time last week, lashed one past goalkeeper Jordan Pickford in the 72nd minute after Everton winger Demarai Gray thought he had sealed a second straight win for the visitors.

“We’re disappointed not to take the three points, after a great finish from Raphinha. We all know what kind of player he is, and to put it in the bottom corner first time like that was great,” Leeds midfielder Kalvin Phillips said.

“It wasn’t the best of us today. It’s early in the season, and I feel like (I) could be a lot fitter, a lot stronger. Every team will create chances against us. We could have done better in the goals they scored.”

Gray, who joined Rafa Benitez’s side from Bundesliga outfit Bayer Leverkusen in July, rifled the ball past goalkeeper Illan Meslier from a tight angle inside the box to make it 2-1 in the 50th minute of a physical contest.

“Against a team like Leeds you have to kill the game off. They’re always going to apply the pressure and with the fans here, they’re not going to give up. We could have taken more today but we’ll take the point,” Gray said.

Everton went up 1-0 against the run of play through Dominic Calvert-Lewin’s 30th-minute penalty, following a Video Assistant Referee check after the on-field official did not spot Leeds skipper Liam Cooper’s tug on the striker’s shirt.

The goal silenced a raucous Elland Road, where a full house was attending a top-flight match for the first time in 17 years, but the home fans found their voices again as Mateusz Klich ran on to Patrick Bamford’s fine pass to equalise before the break.

Leeds looked steadier in midfield than in last weekend’s 5-1 defeat by Manchester United with Phillips back, but were still carved open easily at times by Everton who were left to rue several missed chances by Calvert-Lewin.

Everton, who won their opener 3-1 against Southampton at home, visit Brighton & Hove Albion in the league next Saturday while Marcelo Bielsa’s Leeds could face a tricky challenge at winless Burnley a day later. 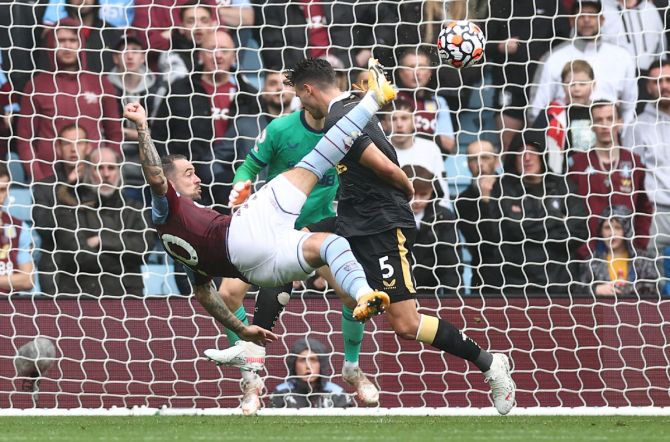 A brilliant volley by Danny Ings and an Anwar El Ghazi penalty gave Aston Villa an easy 2-0 victory over a poor Newcastle United side in the Birmingham club’s first home game of the Premier League season on Saturday.

A record of 12 goals in 29 Premier League games for Southampton last term prompted Villa to recruit the 29-year-old Ings for a reported 25 million pounds, and with two goals in his first two league games, the investment is already paying off.

Newcastle striker Callum Wilson wasted a good early chance before Ings put Villa in front just before the break, throwing himself in the air and volleying home a flick-on from a long throw in first-half stoppage time.

Things went from bad to worse for the visitors in the second half when defender Jamaal Lascelles was penalised after a goal-bound header from Tyrone Mings hit him on the arm, and El Ghazi confidently fired home the resulting penalty in the 62nd minute.

Newcastle thought they were back in it when Wilson was cleaned out in the box by Villa keeper Emiliano Martinez, but the referee’s decision to award a penalty was overturned after the Newcastle striker was found to have been offside when the ball was played forward.

Newcastle failed to find the spark that might have ignited a comeback, slumping to their second defeat of the season following their 4-2 opening day loss to West Ham United, leaving them second from bottom of the standings, with Villa in eighth.

“We had to deal with balls in behind with their pace, but a great finish from Danny Ings and a set-piece routine we worked on in pre-season. That is what we brought Ings in for,” Villa boss Dean Smith told the BBC.

The long throw-in to set up Ings was one of many tactics employed by Villa, but the striker was still playing his cards close to his chest after the final whistle.

“I can’t tell you about the routine, that would be giving a lot away, It’s just something we work on — set pieces are a huge thing now in the Premier League, and ultimately they can make the difference in these games,” Ings said.

“It fell to me and I reacted, and luckily it went in the back of the net.”

Parrikar discharged, back home in Goa