Arsenal restored their five-point lead at the top of the English Premier League with Eddie Nketiah scoring twice in a 3-2 defeat of Manchester United, including a 90th-minute winner, in a rip-roaring clash at The Emirates on Sunday.

It looked as though it would end honours even with United resisting a late Gunners siege but Nketiah tapped in from close range to send the home fans into raptures.

A game that fully lived up to expectations saw Marcus Rashford give United the lead with a stunning early opener only for Nketiah to head Arsenal level in a frantic first half.

Bukayo Saka’s flashing drive gave Arsenal the lead in the 53rd minute but Lisandro Martinez’s header levelled it up before the hour mark to set up an absorbing finale.

Saka struck the post and Nketiah was denied by David de Gea but the hosts were relentless as they avenged their loss to United earlier in the season — their sole defeat. 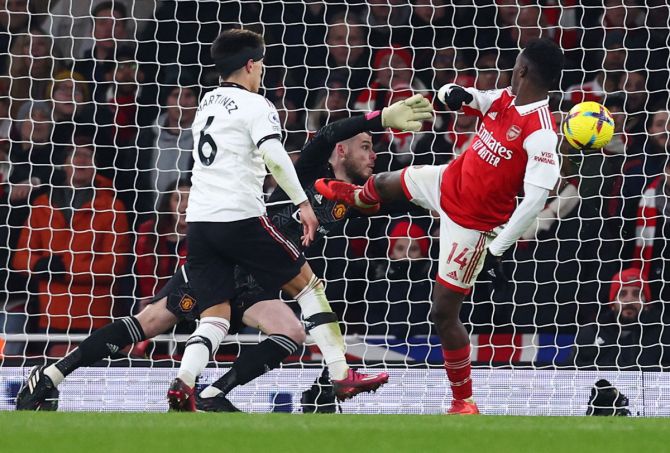 Mikel Arteta’s side have 50 points from 19 games, their best ever first half of a Premier League campaign, with City on 45 from 20 and United in fourth place on 39, below Newcastle United on goal difference.

“You could see how much we wanted to win and how bad we wanted it for ourselves and our fans,” youth product Nketiah, who has scored seven goals in his last seven games as a stand-in for the injured Gabriel Jesus, said.

Arsenal’s title credentials are no longer being questioned and victory over United was another massive statement after champions City had earlier got to within two points.

United have been in superb form, winning five of their last six in the league, and took that confidence into the early stages despite being without suspended midfielder Casemiro.

It took them only 17 minutes to take the lead and it was no surprise it was the in-form Rashford who scored the goal.

When Arsenal lost the ball in midfield the ball landed at the feet of Rashford and after tricking his way past Thomas Partey he cut in before unleashing a low shot from just outside the penalty area that screamed inside near post.

It was a jolt for Arsenal who had not conceded so early all season but they responded impressively. United needlessly conceded a corner after trying to play out from the back and Arsenal worked the ball to Granit Xhaka who delivered an appetising cross for Nketiah to time his leap perfectly and thump a header into the back of the net.

Arsenal keeper Aaron Ramsdale was forced to make a save from Scott McTominay as the frantic pace continued until halftime.

The hosts moved up a gear in the second half and Saka gave them the lead in the 53rd minute with a goal to rival Rashford’s. Cutting in from the right he fired a stunning left-foot shot that gave De Gea no chance.

Back came United though and six minutes later they were level when Ramsdale could not deal properly with a high ball and the ball bounced out to Martinez who improvised a lobbed header that nestled in the back of the net.

Arsenal began to turn the screws and with 20 minutes remaining Saka almost restored Arsenal’s lead with a carbon copy of his goal but this time the ball clipped the outside of the post and when De Gea saved from Nketiah it looked as though the hosts would have to settle for a point.

But Nketiah, who has established himself as a fan favourite, was on hand to flick home from in front of goal in the 90th minute after a low cross was deflected into his path.

Asia next on our agenda, says Sunil Chhetri