Victorious by 2 goals to 1, the nation made their way to the Euro finals for the first time in history, putting an end to Denmark’s inspiring run. Is it coming home? A historical night at Wembley. 55 long years since an entire nation has been yearning, hoping, longing, all down to this final moment at the UEFA Euro 2020. England surged past Denmark in a thrilling Semi-final on Wednesday night to set the stage for a much anticipated game with Italy. Victorious by 2 goals to 1, the nation made their way to the Euro finals for the first time in history, putting an end to Denmark’s inspiring run. Is it coming home?

A stunning freekick by Mikkel Damsgaard provided Denmark with an early lead. In a moment of brilliance, Damsgaard fired a cannon of shot above the English wall, which dipped under the bar and beat Pickford in a sensational fashion. The midfielder curled the ball well over the wall, and with a brilliant instep and technique, provided Denmark with their much deserved winner in the 30th minute. England were down for the first time in this tournament and 5 minutes after breaking the record for an English goalkeeper to have not conceded a goal for the longest time period, Pickford let Damsgaard’s stunner slip past him. With his strike, Damsgaard also scored the first direct freekick of Euro 2020. How would England respond to this early pressure from a promising Danish squad?

What a heroic save! England had been closing in and seemed to be onto something with their rapid attacks forward ever since Damsgaard’s freekick. A breakthrough nearly came in the 38th minute, as Raheem Sterling almost sent a low delivery into the back of Denmark’s net. Kane clipped a low ball into the box for Sterling to carry forward, who outran Christensen, now only a couple yards away from Schmeichel. Just as the English forward attempted to drill the ball into the left corner, Schmeichel spread himself across the length of the goal line, denying a threatening English attack. Schmeichel saved Denmark with an incredible stop, leaving Sterling awestruck as English fans held their breath awaiting a miracle at Wembley. 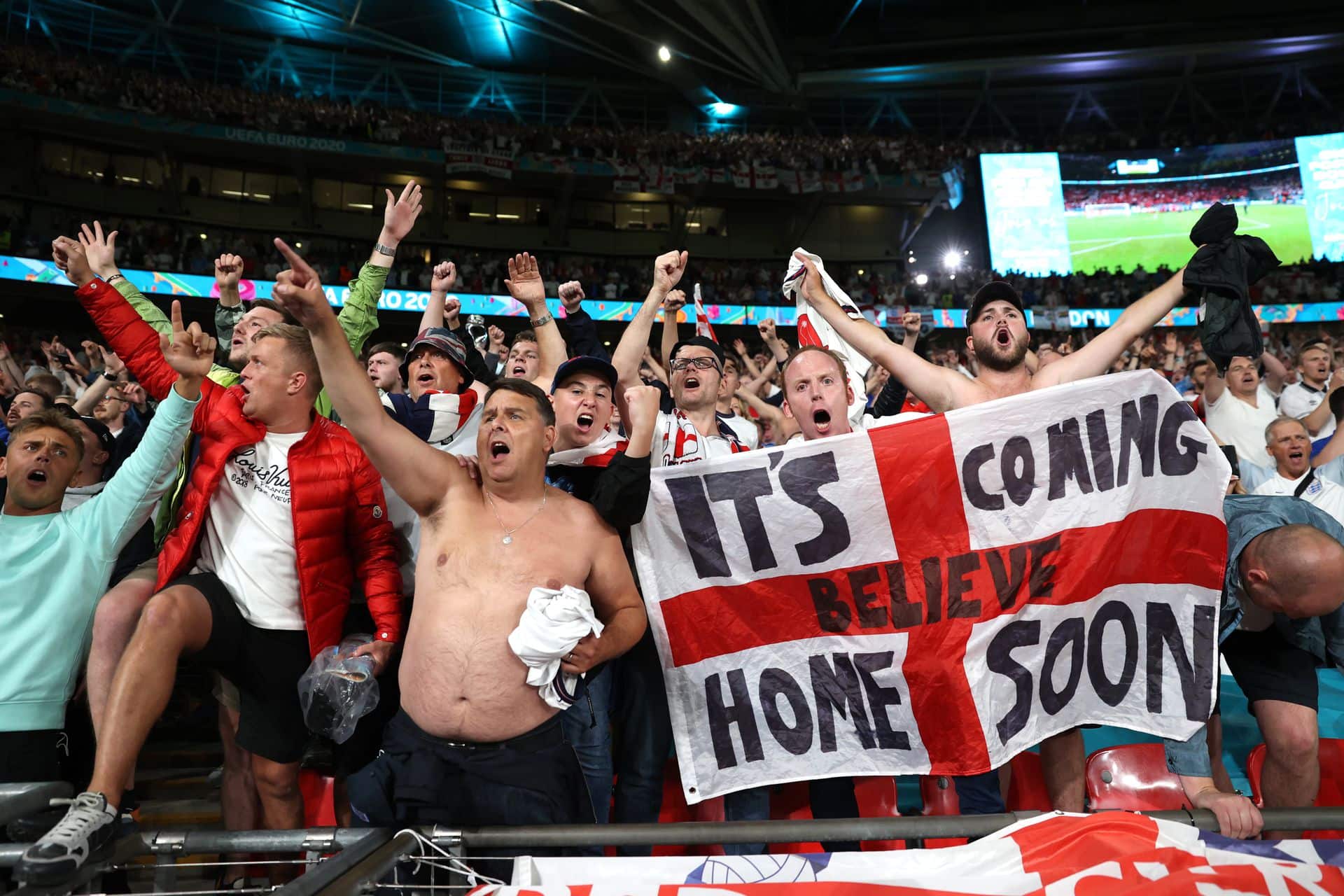 And the miracle did come, a mere 48 seconds later. The skipper, Kjaer, diverted the ball into his own net in the 39th minute, in a dramatic own goal for Denmark. England’s pressure finally paid off as Saka cut open a Danish defence down the right flank. The winger delivered a powerful cross into the penalty box in an attack nearly identical to the previous one. Sterling was on hand to send the ball home, but Kjaer, sprinting back to stop the ball, found himself facing towards the Danish goal. In any defender’s nightmare, Kjaer sent the ball that was begging to be converted flying into the top of the net bringing the Three Lions level at Wembley.

Schmeichel proved his brilliance once again, and yes, he certainly had to. With over 15 attacks forward, England weren’t letting go of this historical event. The Danish defence seemed to be tired but managed to stay alive through Kasper Schmeichel’s incredible block 10 minutes into the second half. Mount delivered a precise cross into the box from the right flank, hoping to pick out an English head. He did so beautifully, finding Maguire, who rocketed skyward, delivering a lean header into the far left corner. The ball seemed to be veering in, but Schmeichel leaped an astounding distance to claw it out of danger seconds before it would have crossed the line. Denmark seemed to be hanging in, just about straying clear of an English side, hungry for more. No keeping Kane out

Minutes before the first half of Extra Time, Sterling used his pace down the right flank only to go down to a challenge by Maehle inside the penalty box. The referee instantly awarded England with a highly controversial penalty that could prove to be a serious game-changer. A VAR check confirmed the penalty but contact on Sterling was minimal, and the debate over whether the penalty should have been awarded is certain to continue for days after the game. In a beyond inspiring effort, Schmeichel dived to the left, reading Kane’s tight spot-kick. He performed a solid stop but ended up palming the ball right back at Kane who dashed forward at the rebound. Having only to tap in simple ball, Kane couldn’t miss this time. In a desperately unlucky situation for Denmark, skipper Harry Kane capitalized on a rebound, sending England 15 minutes away from a Euro Final.

Wembley saw incredible scenes- fans running down the aisles, littering the stadium with their shirts, and yelling their hearts out. England had ended 55 years of struggle and hardship. The Three Lions had written their own history and had knocked out a valiant Denmark side, who had certainly been incredible at this tournament, especially after Christian Eriksen’s unfortunate cardiac arrest in the first match. For Gareth Southgate and his boys, Sunday’s match against Italy will be the biggest event in English football since 1966. Too long have they grieved. Too long have they suffered. Too long have they endured. But tonight, after 55 long years, English fans will sleep easy. The words “It’s coming home. It’s coming home. Football’s coming home,” will line London’s every street, bar and alley, now only dependent on Sunday’s exhilarating UEFA Euro 2020 Final with Italy.

(Ahaan is an intern with indianexpress.com)

‘Felt that we needed these two,’ Pakistan captain Babar Azam defends decision to recall veterans ahead of Bangladesh T20Is