It was a day of fluctuating fortunes, with England having a 72-run opening partnership, New Zealand taking three wickets in four overs to make it 85-3, and then Lawrence helping the English regain the initiative in the evening session with an unbeaten 67. Rory Burns and Dan Lawrence struck half-centuries as England reached 258-7 at the end of the opening day of the second and final test against New Zealand at Edgbaston on Thursday.

It was a day of fluctuating fortunes, with England having a 72-run opening partnership, New Zealand taking three wickets in four overs to make it 85-3, and then Lawrence helping the English regain the initiative in the evening session with an unbeaten 67.

Lawrence was with Mark Wood (16 not out) at stumps in front of a boisterous crowd of 18,000 at Edgbaston and just 14 runs off Burns’ top scorer of 81, which backed up the left-handed opener’s 132 at Lord’s in the drawn first test.

“It’s been a tough day of test cricket and is pretty even by the end,” Burns said. “I think there’s something in that surface for everyone.”

Indeed, the New Zealanders will not be displeased with their efforts and looked on course to dismiss England cheaply in reducing the hosts to 175-6, after wicketkeeper James Bracey was out first ball for his second duck in as many test innings.

Trent Boult, Matt Henry and Ajaz Patel all took two wickets for the Black Caps, which made six changes from the first test including the late, injury-enforced withdrawal of wicketkeeper B.J. Watling. 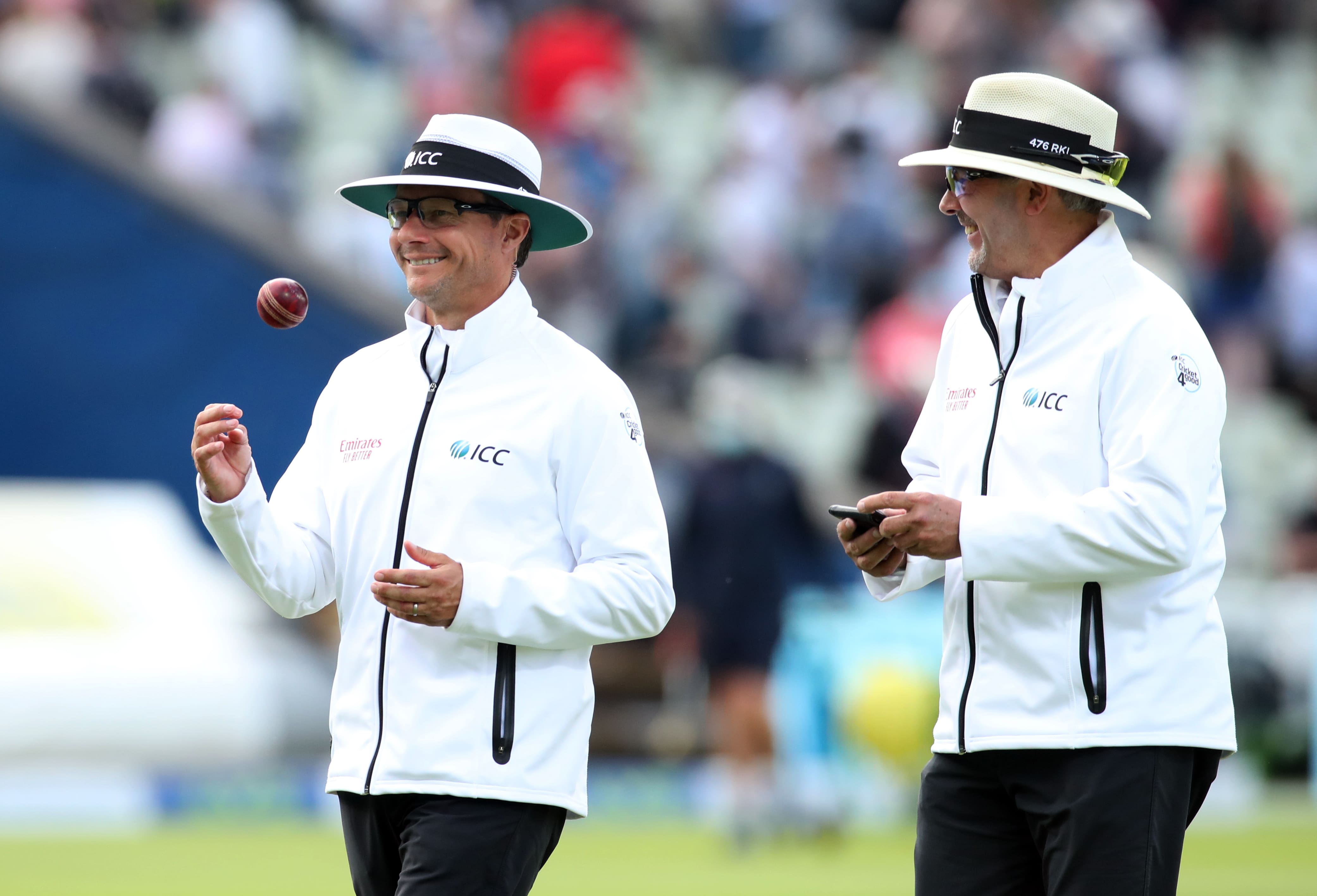 The tourists chose to rotate ahead of the World Test Championship final against India, which is their priority and starts on June 18.

England’s only change saw Olly Stone replace fellow fast bowler Ollie Robinson, who was suspended for the match by the England and Wales Cricket Board pending an investigation into historic discriminatory tweets that resurfaced during the first test.

That kept England with an all-seam attack that included Jimmy Anderson, who became the country’s most-capped test player with his 162nd appearance.

Anderson was able to put his feet up in the dressing room after England captain Joe Root won the toss and opted to bat first.

Edgbaston was at 70% capacity, with the match part of the British government’s pilot event scheme for the return of sports events during the pandemic, and there was a long-awaited throwback to the familiar sights and sounds of the summer game such as the loud chanting and the fancy dress — all conducted without the demands of social distancing.

Both sides shared a pre-agreed “moment of unity” before the start of play, with England once again donning anti-discrimination T-shirts that have taken on an even greater significance since the Twitter storm which began with the suspended Robinson. The gesture was warmly applauded by the crowd. There were reports of Robinson’s name being sung later in the day.

Dom Sibley (35) was first man down, caught behind as Henry’s accuracy paid off, and Zak Crawley was next in making a four-ball duck as his run of poor form continued. Since his career-best 267 against Pakistan last August, he has been dismissed in single figures nine times in 11 attempts and was almost cleaned up by Neil Wagner’s inswinger immediately before he sprayed a catch to third slip.

Root’s departure for just 4 was even more worrying. His only scoring shot sailed wide of the cordon and he nicked Henry’s next ball through to wicketkeeper Tom Blundell, a replacement for Watling.

Burns brought up his half-century in 141 balls, with the left-hander putting on 42 with Ollie Pope, before the latter continued his frustrating habit of getting started then getting out. With 19 to his name, he aimed a cut at the gentle spin of Patel but edged behind.

When Burns and Bracey fell to successive Boult deliveries -both chasing the ball well away from their bodies- the crowd started to go quiet.

It took some panache from Lawrence to lift the spirits and the decibel levels. He had a sticky start, including a couple of streaky boundaries off Henry, but began to show his personality and his skill as the evening session continued.

He hit one immaculate off drive that was arguably the shot of the day and was soon whipping the second new ball off his hips in confident fashion. He signed off with a fierce straight hit off Boult and will harbor hopes of a maiden century if the tail can continue to linger.

‘I married my best friend’: YouTube’s interabled influencers break another stigma with their fairytale wedding