Jobby Justin once again emerged as a game-changer with an assist followed by an opportunistic strike that enabled East Bengal defeat Mohun Bagan 2-0 to remain in I-League title contention. 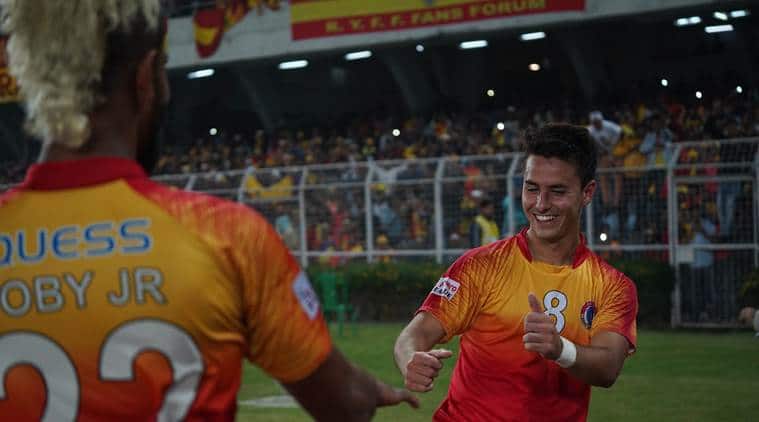 Kerala youngster Jobby Justin once again emerged as a game-changer with an assist followed by an opportunistic strike that enabled East Bengal defeat arch-rivals Mohun Bagan 2-0 to remain in I-League title contention. The 25-year-old first set it up for Jaime Colado who broke the deadlock in the 35th minute and then angled his header to perfection beating custodian Shilton Paul to seal three points for the red and gold brigade.

It is after 15 long years that East bengal have won both derbies in a single edition of national league. With this win, East Bengal with 25 points from 13 games moved up to fourth position. Real Kashmir has same points from equal number of matches but are placed third on account of better goal difference.

Finally in 35th minute, man of the match Jobby got past the profligate Eze Kingsley and set it up for Colado, who slotted past Shilton. East Bengal looked a compact unit while Mohun Bagan were let down by their back four while a couple of refereeing decisions also went against them.

In a 51st minute move, Colado had a bitter tussle with Dipanda Dicka and seemed to have fisted the Cameroonian forward inside the box but referee Ramaswamy Srikrishna of Coimbatore chose to ignore the incident. Moments later, Mohun Bagan got the real opportunity to level when Eze’s powerful header hit the horizontal.

There was more action in store after the ball ricochetted off the bar as Darren Caldeira and Dipanda Dicka got in the thick of action with the latter finding the back of the net. But the linesman ruled it off-side much to the disappointment of Bagan players.

Jobby then put the final nail in Bagan coffin as he outjumped his marker to head home a Lalrindika Ralte corner to bring up his eighth goal of the season. Under new coach Khalid Jamil, Mohun Bagan were high on hopes after winning successive matches with their star winger Sony Norde back in his element.

But East Bengal did well to keep the Haitian at bay as he struggled to get the ball or his attempts were blocked by the alert defence. Norde’s only realistic chance was in the first half but his first-time shot from the close ranger was well anticipated by Lalram Chullova.

Neroca FC played out a goal-less draw against Aizawl FC to suffer a setback in their hopes of remaining in the I-League title hunt here on Sunday. The eventful game saw Neroca’s Brazilian defender Eduardo Ferreira receive a red card for a dangerous challenge on Zikahi Dodoz in the 48th minute.

Neroca FC, after two consecutive defeats to Mohun Bagan and Churchill Brothers, needed a win to return to title contention. However, it was the visitors Aizawl FC who threatened to draw first blood but they were unable to convert the opportunities that came their way.

Aizawl missed an opportunity when their Nigerian forward Kareem Nurain’s shot from just outside the box hit the post and then cleared by a Neroca defendor. The Manipur side, on the other hand, took time to settled down but later made some promising moves and breached into the Aizawl box quite a few times but full credit to the visiting side defenders and goalkeeper Lalawmpuia, who ensured that the hosts do not edge them out early.

While the first half ended goalless, it was a highly entertaining next 45 minutes, as both the teams displayed attacking football. The second half began on an eventful note as Neroca defender Eduardo was shown the red card in the 48th minute for a dangerous challenge on Aizawl’s Ivorian forward Zikahi Dodoz.

Neroca FC, who were now down to 10 men, had more trouble coming their way with two back-to-back yellow cards on Sebastian Thangmuansang, in the 50th minute, and Aryn Williams, in the 52nd minute, for rash challenges.

The game, thereafter, saw the visitors pressing hard on the 10-man Neroca at regular intervals, but could not really make the most of their opportunities. While Neroca did make a few attempts to score but nothing was impressive enough to trouble the Aizawal defence.

Cocoa beans with a twist

How a Kerala district is fighting COVID-19