Seasoned campaigner Dinesh Karthik brought all his experience into play as he steered the Royal Challengers Bangalore to a thrilling three wicket victory over the Kolkata Knight Riders at the D Y Patil stadium in Navi Mumbai on Wednesday.

RCB were in danger of losing their way after being reduced to 101/5 after 16 overs at the fall of Shahbaz Ahmed’s wicket.

But Karthik’s arrival calmed the RCB camp. Despite needing 28 from 4 overs, Karthik — who has been involved in all editions of the IPL since the inaugural season in 2008 — didn’t panic as just four runs came from the 17th over bowled by Sunil Narine. 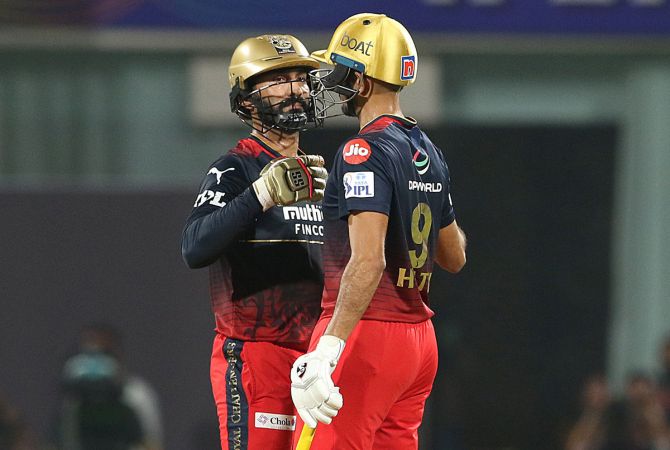 KKR pacer Tim Southee dealt RCB’s hopes a big blow with twin strikes in the 18th over when he dismissed Sherfane Rutherford (28) and Wanindu Hasaranga (4), leaving the equation at 17 needed from the last two overs.

Harshal Patel chanced his arm for a couple of overs from the 19th over bowled by Venkatesh Iyer before Karthik provided the finishing touches in the final over.

Karthik, who was bought by RCB for Rs 5.5 crore (Rs 55 million) after playing the last four seasons for KKR, pulled Andre Russell for a six and then produced a magnificent straight drive for a four to take his team to victory, with four balls to spare.

Karthik finished unbeaten on a cameo of 14 from seven balls (strike rate: 200), while Harshal contributed with 10 from six balls.

‘DK’s experience helped in the end.. cool, calm! He’s probably as cool as M S Dhoni can get in the last five overs, RCB Captain Faf du Plessis said after the win. 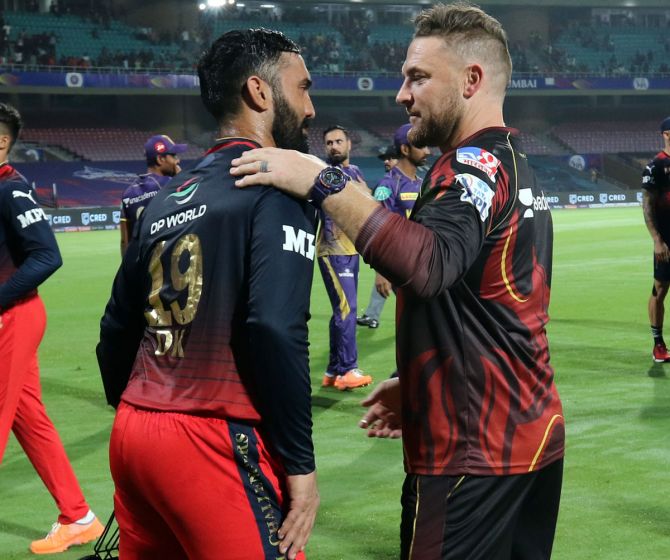 This is his second stint at RCB, having earlier played for the franchise in 2015 when he was bought at the auction for Rs 10.5 crore (Rs 105 million).

‘Happy to finish and grab first points of the season @royalchallengersbangalore,’ DK posted on Instagram.

‘We can’t stop now. Next target is that the flag is raised in the centre and is topmost’: Manpreet Singh

Maneka remark based on half-truths: Minister

Covid-19: India’s mortality rate lowest, govt aims to bring it down to below 1 per cent, says Health minister