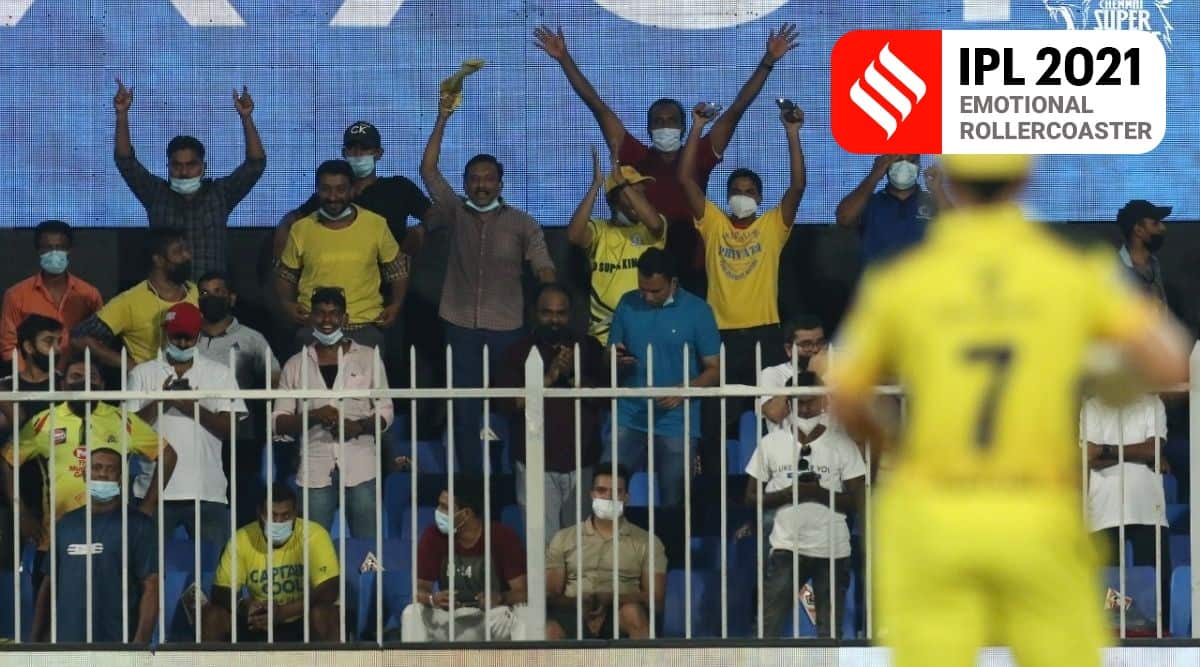 Dhoni as expressionless as a man waking up in the morning and walking to brush his teeth. The players on the square in awe wondering if he is for real. Crowd delirious, hoping he doesn’t retire any time soon. Two deliveries ago, captain Williamson had put his arm around the bowler Kaul and extracted a dout of him. Dhoni burrowed deep into the crease as Kaul bowled a tad short of length, aiming for that midwicket area the previous ball for no runs. Taking it to the wire, like always, he would smack a 6 over the very same midwicket. Like always. It’s been 10 years since the Wankhede six, and the nervousness around these situations doesn’t go away. Dhoni’s 6 summoned at will, isn’t going away either.

It was Shardul Thakur’s Jon Snow moment. Well, sort of. In the ninth over, Thakur turned from his follow-through to move towards the stumps to gather the throw when he rammed into the batsman Priyam Garg, who was desperately trying to reach the safety of the crease. Thakur fell over, of course, but Garg was left with more pressing matters of survival. He was toppling down but scrambled hard to slip his foot inside the crease to avoid being run out. Fifty years ago, in 1971 Sunil Gavaskar was sent sprawling by a shoulder barge from the England bowler John Snow at Lord’s. Snow, then, tossed the bat towards Gavaskar. In his book Sunny Days, Gavaskar called it a “violent shove”, while England legend Denis Compton called it “disgraceful”. Snow apologised to Gavaskar and would clarify later that it was purely an accident but England banned him from the next Test. Years later, he would tell Mid-Day, “I was just trying to pick up the ball to run him out. I apologised to Sunil, but there was a furore in the dressing room because I did not go down to the Indian dressing room to apologise which I told Alec Bedser [chairman of selectors] I would do.”

Two wides and a beauty

A diamond in the midst of kitchen coal. Or Tolstoy squeezed between Chetan Bhagat and Jackie Collins. Dwayne Bravo’s beauty to snip Kane Williamson could thus be defined. The wicket was a beauty— it floated in, swaying the SRH skipper’s eyes to the vast expanse on the leg-side, grassy and empty like the highway that connects his quaint hometown Mount Manganui to Hamilton, the district headquarters. But the ball, after landing, or rather grazing the good-length band of the pitch, gripped the surface, held its line and kissed his front-pad, planted parallel to the stumps. A devil of a ball in the disguise of a close friend, a throwback to the Kiwi dibbly-dobbly era than break-your-jaws Caribbean vintage. But either side of the ball were a couple of wides that defy description. The ball that preluded the wicket ball was so wide that MS Dhoni had to lunge almost full-stretch to collect it. The ball that succeeded didn’t bother Dhoni at all. It veered comfortably into the hands of Suresh Raina at first slip, after almost landing beyond the pitch. Bravo apologised sheepishly, though Dhoni kept throwing him the stink eye. Both would have been Test-match-standard wides, but then Bravo did produce a little gem of a ball to twinkle out the most precious of SRH batsmen. Kick out the kitchen coal and grab the diamond.

Faf du Plessis is not the most expressive of batters around. Six, four, bowled, he usually ingests with equanimity, or at best a quick chuckle. But after gliding down the track, as if the deck were a disco floor, lofting Bhuvneshwar Kumar straight over his head, he stood in self-awe in his follow-through, salivating the ball’s furious flight, it’s brisk belly-dive into the pitch near the ropes, burning the dew to hit the advertisement hoarding and rebound back to the perimeter rope. Faf was in a murderous mood and had picked a couple of sixes. But it’s this stroke (not that it was the most difficult one, but batsmen do get pleasure from hitting a big, tall fast bowler straight over his head) that stoked the inner Narcissus in him. It also brought a wider than usual smile, a genuine sense of satisfaction. And why not?

Not a great audition for Rashid

Rashid Khan doesn’t have that great a record against Chennai Super Kings and he was under pressure when he came on to bowl the sixth over of the chase. Ruturaj Gaikwad went for a sweep first ball and got a top edged boundary. Next ball, he thundered down the track to heave a six. Rashid went for his favourite googly from back of length next ball, beat Gaikwad’s sweep and trapped him lbw as the ball struck the stomach region in front of the stumps. A victorious grin spread across Khan’s visage but had to wipe it off as Gaikwad got DRS to review the decision. In his next over, he would have another chance when Gaikwad hammered a tossed up delivery back at him. More hurt was in store though, metaphorically and literally as the ball rammed into his knees and squirted away. He would have to wait until the 15th over to have some luck. Moeen Ali had failed to connect with a pull and the ball rolled off his thighs on to the stumps. Some joy, at last for the man who has gone on record that he dreams to play under the captaincy of CSK captain Dhoni.

Barcelona return to training after a break of two months