‘One of the most exciting things about last week is that we weren’t at our best, certainly areas we can improve, but we found a way to win under pressure, and wrestle momentum back in our favour.’ 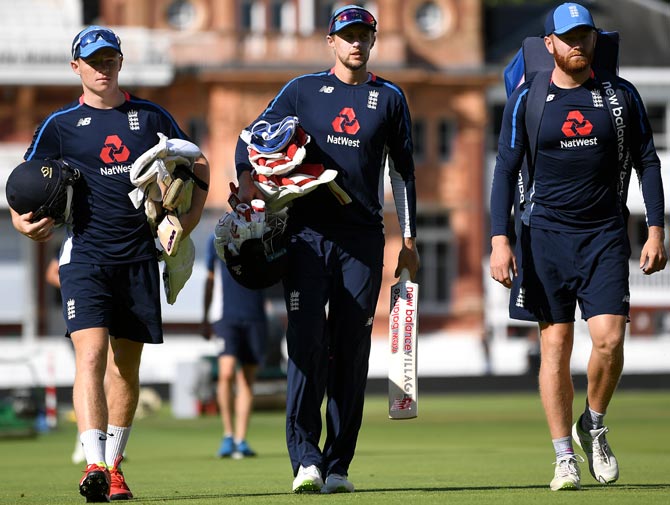 England captain Joe Root has said that their victory in the first Test at Birmingham last week, despite not being at their best, has energised the hosts with confidence as they prepare to take on India at Lord’s, in the second Test, starting on Thursday.

“It fills you with masses of confidence. One of the most exciting things about last week is that we weren’t at our best, certainly areas we can improve, but we found a way to win under pressure, and wrestle momentum back in our favour,” Root said on the eve of the second Test, in London, on Wednesday.

Hosts England prevailed over India by 31 runs in a tight finish at the Edgbaston last week, taking a vital 1-0 lead in the five-match series.

“That’s a sign of some strong characters in our dressing room. And having had some indifferent results in the recent past, to pull off a win like that is a really good sign for us moving forward.

“If we can make small improvements in certain areas, and add that to where we were good last week, we will see some improvements from last week.”

Having won just three out of their last nine Tests at Lord’s, England go into this second game with a poor recent record.

“Every time you turn up here the surfaces can be quite different. At the start of the summer we were below par and it would be easy to look too far into that, but against South Africa there was a lot of spin and against India (in 2014) spin came into it a lot in the second innings. That might play a big factor.

“We will have to wait to see what the surface looks like tomorrow morning but ultimately on the last couple of occasions, whoever has played well in the first innings has managed to contain that threat through the rest of the game. So we have to start well and try to stay on top if we can,” he said.

Root also announced that 20-year-old Ollie Pope will make his Test debut and bat at No. 4, while the hosts will wait until the toss to decide whether to play a second spinner (Moeen Ali) or an extra pacer (Chris Woakes) in place of Ben Stokes.

The skipper said that the right-handed Pope wasn’t a tactic against Ravichandran Ashwin or Ishant Sharma, who have a good record against left-handed batsmen.

“With the surface as it is, having looked at it today, we’re going to leave it another 24 hours and then make a decision in the morning. I’m not sure, having played quite a lot here, if it will change a huge amount.

“But we just want to make sure, be really clear, that going into the game we can be really confident we’ve got the best 11 players to take 20 wickets on that surface. So we’ll turn up tomorrow, see if it looks any different, and then make that decision,” he added.

About countering Ashwin and Ishant, he said, “They are two fine players and one of the reasons why India have been successful is they have some brilliant experienced players to call upon. The guys have thought quite clearly about how to try and get each individual out, and practise accordingly, and that’s all you can ask from your team.

“We have prepared as much as possible and feel like we are in a good position coming into the game. Opposition players are allowed to play well and they definitely did that at Edgbaston, so it’s just about combatting that as a team and making sure that when we get our opportunities to go big, someone takes the game by the scruff of the neck.”

Pope comes in place of dropped Dawid Malan, which means England will have a new slip cordon in place. Root said that dropped catches in Birmingham are a concern against a quality side like India.
England had dropped Virat Kohli thrice before he went on to score 149 in the first innings.

“It’s a crucial part of Test cricket, especially India being such a good side you have to take those chances.”

Root said that it will be important to manage Kohli at the crease, in terms of keeping him away from strike, like they did in the second innings previously.

“Virat’s a fine player and it shows when you give the best players opportunities they don’t need many more. On that last morning he batted 55 minutes and he faced 13-14 balls. It was very skilful to be able to manipulate him off the strike and starve him of facing the majority of deliveries.

“And in the first innings, to create two half-chances and two clear chances was testament to how we’ve got good plans against him and found a way to potentially get him out. Nice to know we are doing the right things, but it’s about taking those chances when they come,” he added.

Apart from Kohli, Root is the only other batsman to come away from Edgbaston with his head held high.

“It obviously can get better. There’s been a lot of talk about this – I look at this summer and twice I’ve managed to get past 50 and go on to make hundreds in succession. It might have been in white ball cricket but I still see that I’ve made an improvement in that area and I wanted to take that forward into this format.

“The frustrating thing about last week it wasn’t poor batsmanship that got me out, it was a poor passage of play in terms of running between the wickets.”

MEPs in Kashmir: Article 370 internal issue, stand by India in fight against terror