‘It is very important for batsmen to stand up, because as everyone can see, our bowling has been performing really well’

‘If we are batting second, we will try to take the lead or get as close to the opposition total as possible’ 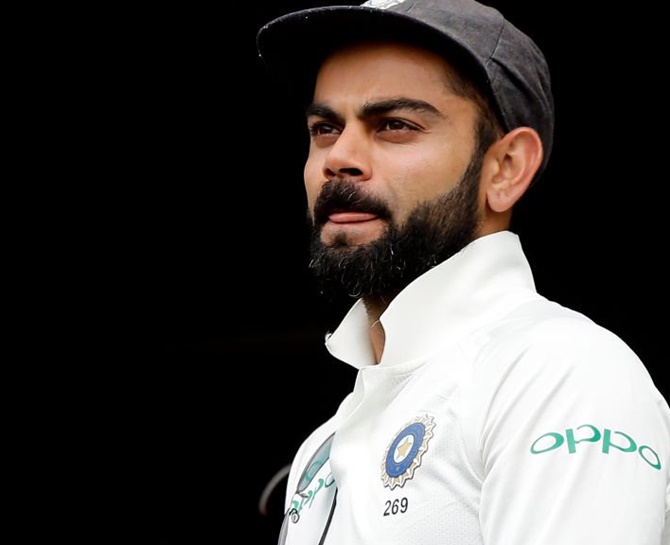 Their patchy performance has stuck out like a sore thumb during the first two Tests and India skipper Virat Kohli urged his batsmen to complement the superb effort of his bowling unit in the upcoming Boxing Day Test against Australia starting on Wednesday.

While Kohli gave a batting masterclass on a challenging track in Perth, Cheteshwar Pujara had played a decisive role in team’s win Adelaide but other batsmen have not contributed much unlike bowlers, who have picked 40 wickets in four innings.

“It is very important for batsmen to stand up, because as everyone can see, our bowling has been performing really well. Otherwise, the bowlers won’t be able to do anything with the totals that we have been compiling,” skipper Kohli said on the eve of the third Test.

“If we are batting second, we will try to take the lead or get as close to the opposition total as possible. If you equal a big score, then it becomes a second-innings’ match and if you take a good first-innings lead, then you can capitalize on that.”

“The batsmen must step up collectively. I won’t say individually whether someone needs to do that or not, but as a batting unit, we have to definitely put up a better performance,” Kohli sent out a loud and clear message for his batting unit.

The Indian captain made it clear that neither his team’s Adelaide victory nor the Perth defeat will have any bearing when Melbourne Test starts.

“The key is to stay in the moment, stay in the present, understand and remember why you won the first Test, which was because of us being in the present moment,” the skipper reiterated what he has often stressed.

Nathan Lyon with 16 wickets in two Tests have been India’s chief tormentor so far and Kohli praised the off-spinner for his effort.

“Lyon is a very good bowler. He consistently bowls in good areas. So we have to have our plans against such a bowler so that we can also explore scoring options because if he is allowed to bowl at one spot for a long time, he becomes even more dangerous.”

“These things you need to figure out constantly – who is bowling well in a particular series and what your plans should be against him. He has definitely bowled very well from the opposition.”

What makes Lyon special is the fact that he plays most of his Test matches in Australia.

“For a spinner to bowl so well in Australia is a huge thing. We are taking it as a challenge, and we definitely want to improve our play against him. We have put in the effort in practice, it now matters who we execute those on the field.”

“As I said, if there is a challenge coming your way, you try and counter it. That’s our effort – if we have been dismissed in a particular way, not repeat that mode of dismissal. As cricketers, that is all you can do,” he added.

Last time when India played at the MCG, the Test ended in a draw even though Kohli and Rahane had scored hundreds.

“Last time the pitch played a big part in not being able to have a result either ways, for both sides. But seeing the pitch now, it has much more grass than it had last time and I hope that it is a lively pitch.”

“I hope it does as much as it did in the first two games because as a side, you always know that you are in for a result that way. The surface, what I saw yesterday, looked pretty dry underneath. There is a good coverage of grass, which should keep the surface intact,” Kohli seemed hopeful.

For Kohli, a pitch should have enough in it to keep the bowlers interested on all five days of a Test match.

“I think it should have enough for the bowlers to stay interested on all days of the Test match and hopefully, it’s a much more lively wicket than the last time we played here,” he opined.

Kohli will be playing his second Boxing Day Test Down Under and seemed pretty excited about it.

“It’s amazing (as an occasion). Obviously, day one is the most anticipated day and we are expecting a lot of people to come in, maybe 80,000-plus. So I have experienced that twice before.”

“It’s definitely a magical day to step on the field, the national anthems for both teams, and you can sense the energy in the stadium. For me, that is my most favourite personal moment of the Boxing Day, when the anthems are sung, you are standing on the field and there are so many people around you. Definitely, it is one of the most iconic Test matches and we are very happy to be a part of that,” he added.

My Instagram page is a fake one, Sourav Ganguly speaks out