Ajinkya Rahane and Ravichandran Ashwin have been the most prolific players for India in the current World Test Championship cycle. Across all teams, Joe Root is in line to become the highest run-getter in the next 2 Tests. India enter the end of the league stage of the World Test Championship (WTC) fighting with Australia and England for a spot in the final  — which will be played against New Zealand at Lord’s from June 18. 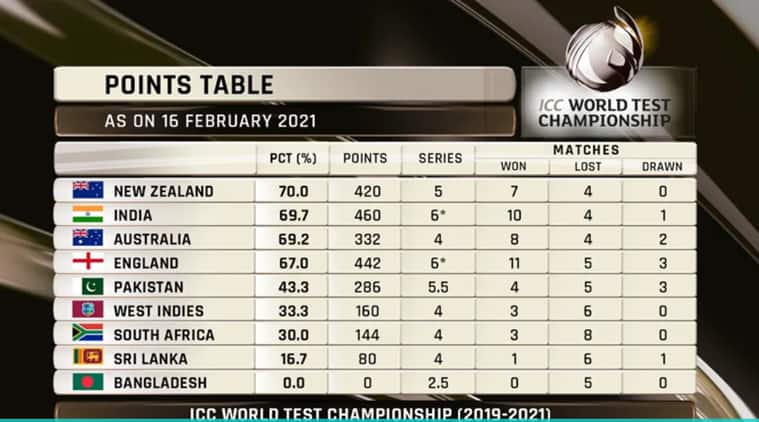 After the series-levelling win at Chepuak, India have 69.7 percentage of points (PCT) and 460 aggregate points. New Zealand have 70.0 PCT and 420 points. Australia are at the third spot with 69.2 PCT and 332 points while England are fourth with 67.0 PCT and 442 points. Virat Kohli’s men are currently playing in their sixth series of the WTC cycle, having won 10 matches, lost four and drawn one.

Rahane is one of five batsmen to have registered more than 1000 runs in the current WTC cycle. Joe Root (1589 runs) is in line to overtake Marnus Labuschagne (1675 runs) as the top run-getter of the league phase. Steve Smith (1346 runs) and Ben Stokes (1241 runs) are the others to have scored more than Rahane.

Ashwin is also one of five bowlers in the world to have taken more than 50 wickets in the current WTC cycle. Pat Cummins (70 wickets) is the top wicket-taker, but Stuart Broad (69 wickets) is in line to overtake the Australian. Nathan Lyon (56 wickets) and Tim Southee (51 wickets) are the other top wicket-takers.

David Warner’s 335* vs Pakistan (November 2019) has been the highest individual score, and the only triple century.

Rishabh Pant and Rohit Sharma have been the most aggressive batsmen with more than 300 runs across all teams in the WTC cycle. Quinton de Kock, Babar Azam, Dhananjaya de Silva, David Warner, Liton Das, Shubman Gill are the others who have batted at strike rates above 60.

Ben Stokes (29) has hit the most sixes so far, having played 6 more Tests than Rohit Sharma.

Virat Kohli (3) has scored the most ducks among Indian batsmen.

While seven has been the most wickets going to one bowler in an innings, Bumrah’s 6/27 vs West Indies has been one of the best spells of the WTC cycle.

Most catches by a wicketkeeper — Rishabh Pant

Pant (34 from 9 Tests) ranks ahead of Wriddhiman Saha (18 from 6 Tests) for India. Tim Paine (65 from 14 Tests) has been the most prolific wicketkeeper.

The highest partnership across all teams has been Kane Williamson and Henry Nicholls’s 369-run 4th wicket stand vs Pakistan in January 2021.

India vs Australia: Practice session for India ahead of World Cup

Meghan McCain: 'I Was Laughing My Ass Off' at NYT Presidential Endorsement